If all goes as planned, the first building in the Collegiate Commons project located off Arizona Street in Buena Vista will receive its certificate of occupancy by this weekend, and families could begin moving in within a few weeks. The 24-unit building is one of two comprising the 48-unit, $11.7 million affordable housing multifamily housing project. It is on schedule and on budget.

“They’re trying to pull the permit by Friday,” said Town Administrator Phillip Puckett. “I’m very pleased with the construction process and outcome for the Collegiate Commons apartments. Bryan Construction did a great job delivering on an aggressive schedule to open up in September.”

The affordable housing project was made possible by Colorado Housing Finance Authority tax credits, which turned into construction loans through Collegiate Peaks Bank. It broke ground in November  2017 and has pushed through construction in under 10 months. The swift progress is no accident.

“We are on time and on budget. Not only have we kept a steady pace, but we did not have a single day  of delay for weather – none,” said Urban, Inc. principal Al Blum. “We were so concerned going in that here we were, beginning in December – when you can run into frost problems, snow storms. But we had zero weather delays. It was unbelievable and that really made a difference in getting this built in a timely manner. The other big concern we had, given this area, is we didn’t know what was under the ground. We worried, were we going to have to blast boulders, but we had zero boulders. We were very lucky on those two things.”

“I especially appreciated the ongoing communication between Bryan Construction and the town as the project progressed so that we could address questions and issues in time to prevent project delays,” said Puckett. “It was great to see Bryan utilize many local contractors and suppliers to help keep a lot of the money in the local economy.  We are very excited to see these units open up and add some more housing options for our community.” 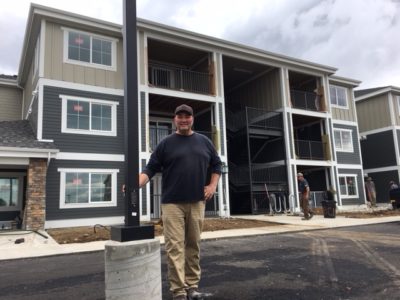 Bryan Construction Superintendent Frank Bardowski pauses for a minute as the company makes finishing landscaping progress on the first of the Collegiate Commons multifamily affordable housing units in Buena Vista. The company hopes to be able to pull a certificate of occupancy by Aug. 31.

“I can’t say enough about the construction company and especially the framers,” said Buena Vista lead planner Mark Doering. “They just kept going. It shows that it can be done.”

A visit to the construction site early this week revealed construction crews doing finishing touches to the exterior areas, including landscaping.

“We’re putting in the grass and trees today,” said Bryan Construction Superintendent Frank Bardowski. “It’s been an eight-month push to reach this point. We’ve had a great team that has really enjoyed doing construction here, in this beautiful place, on this great project. There will be a playground, which we’ll construct to the west of this first building after we complete the finishes on the second structure.”

Urban, Inc. has more than two decades of experience building affordable housing in rural areas of Colorado, from Cañon City to Grand Junction, Durango, Pagosa Springs and Fort Lupton. Twenty years ago it built Sunrise Manor in Buena Vista. “We’ve been in rural housing for a couple decades,” said Blum. “We feel comfortable going to the rural areas and the EDC has been very supportive. On this project, this location was critical and the land swap with the school was a win-win for everybody. The school got the ball field, we got the great location, and they passed their bond issue to get the new school.”

With the first building complete, Blum said the second 24-unit structure should be completed by the end of September. A grand opening will be scheduled once the entire project is complete. “Getting the CHFA tax credits made the difference on whether this project could be built,” said Blum. “There were 12 projects awarded out of 43 applications. We were ranked the number one project out of all of them because of all the involvement of the school board, the city of BV, the Economic Development. Corporation. This entire project is an example of what happens when we collaborate.”

For his part, Buena Vista Mayor Duff Lacy is glad to see the project so near completion and is anxious for the grand opening. “The availability of housing is desperately needed in the town and the county. Although not a complete nor a perfect solution to our housing needs, Collegiate Commons is just one step in the direction to accommodate the people who want to stay here but need to get a foothold before moving into a more permanent residence. It complements the other subdivisions by adding another option for housing needs. The central location makes it ideal for mobility around town. The design and the appearance of Collegiate Commons is complementary to the surrounding area.”

Blum said to build affordable housing in a rural area requires collaboration. “We could build all kinds of luxury housing here, but it doesn’t solve the problem for the local workforce. Rural areas need taxing authorities and waivers for things like water and sewer fees. Every little bit of collaboration can help make a property affordable.”

There are already 150 people on the Collegiate Commons prospect list going through the qualifying process for the 48 units. That process is required because to qualify, renters’ incomes need to meet state low-income standards for the number of wage-earners and the size of their families. The company has done very little marketing. Most of the applicants have come to them through word-of-mouth. Blum said they were hopeful that they could start moving people in the first week of September if the certificate of occupancy can be issued on Friday, Aug. 31. 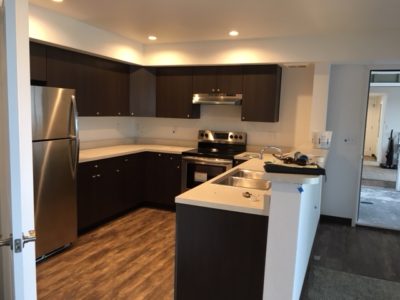 The interior finishes for the Collegiate Commons project, coupled with mountain views out nearly every window, make this “the nicest affordable housing units I think we’ve ever done,” according to Urban Inc. Principal Al Blum.

Blum said they are extremely pleased with the interior finishes of the one-, two- and three-bedroom multifamily units, which will rent for around $700, $800 and $900 per month. The units are finished in neutral colors, with balconies and patios, stainless steel kitchen appliances, combo washer-dryers and ample storage. Most units have gorgeous views of the surrounding mountains.

“You know, we have a lot of experience in building affordable housing, and I think of all the affordable housing we’ve done – with this beautiful location and the interior finishes– it’s probably the nicest units we have ever done,” said Blum.