On Monday evening, several Colorado legislators who represent the Western Slope counties held what they referred to as “the first-ever bipartisan Western slope legislators’ virtual conference.” Organized by Representative Dylan Roberts (who happens to be a candidate in the crowded Democratic primary for the Dist. 5 Senate seat held by term-limited Kerry Donovan), it included Reps. Julie McCluskie, Judy Amabile, Perry Will, Matt Soper, and Barbara McLachlan, as well as Senator Kerry Donovan.

“This is the first time we’ve done a virtual town hall together, but it’s important that residents in our western counties know that we do work together in a bipartisan way,” said Roberts. ” We may be different parties, but we represent the West and share an approach to issues that is different from the metro areas.” 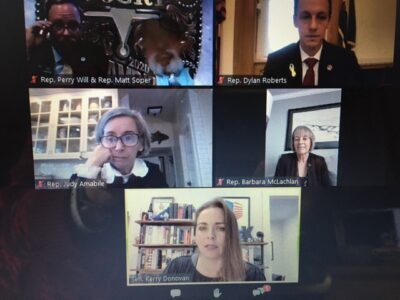 “In fact, this is a great symbolic screenshot,” said Donovan, referencing the Zoom screen of the virtual town hall. “It’s our bipartisan approach on behalf of the counties we serve.”

The legislators introduced themselves and the issues on which they focus. McCluskie sits on the 2023 budget committee, and among her focus areas is the state’s investment in childcare. “This year we’re investing millions in strengthening the workforce pipeline – pulling people back in from ‘the great resignation’. We’re on the verge of making some of the largest investments in education including public, and post-secondary.”

“This year we’re planning to make an unheard-of investment in water,” said Donovan. “I  was able to lift the conversation to the top of the investment conversation. We have plans to put more than $50 million into working on Colorado water needs. We’ve got to prepare for compliance with a future with less water. Our legacy is agriculture and we need to protect that legacy.”

Roberts noted that the Colorado legislature is looking at housing bills with a combined investment in affordable housing of $400 million. “We’re looking at a revolving loan fund. This is huge.”

“Funding wildfire mitigation, protecting public lands and investing in clean energy future,” are important budget items,” said McLachlan, who noted this investment needs to include tribal lands, which have seen little investment in any of these priorities. She discussed the education bills that have been introduced to aid in the state’s current severe shortage of substitute teachers, including a PARA bill that would allow retired teachers to fill in as substitute teachers for entire semesters without losing their retirement benefits. She also noted another bill that would encourage school student internships, saying “we’re going to train the people coordinating the internships on what these kids need to be good professionals in the world.”

McLachlan left the town hall a bit early to get back to the House budget negotiations table.

Rep. Will said that he’s been working with Rep. Soper on some bills related to energy, the education of our children, and public safety. “I came from CPW (Colorado Parks and Wildlife) and so I have a wildlife background. I worked with Donovan last year on the search and rescue funding bill and we’re also working on a bill for in-state tuition and a resiliency bill for the Colorado Resiliency Office — preparing us for natural disasters.”

“I worked with Roberts and Donovan on a bill that would allow irrigation ditches to loan money to focus on making their ditches more water-efficient. What I call ‘the low-hanging fruit of water conservation’,” said Soper. “We have so many earthen-lined ditches out there and we have got to get every drop of water to the fields. We want to fund a mechanism to do that.”

“These are the future… we’d treat them as ag and ag personal property, adding that incentive,” explained Soper. “I have a constituent in Gateway growing grain and grass indoors as a supplement for his cattle in the winter. They have a nice sheen on [their coats] in the wintertime. Over in Silt [with this approach], we could have fresh produce for Coloradans …. we could grow food year-round.”

All of the legislators stressed that they are working together to try to lower the cost of healthcare for Coloradans. Their focus: developing a bill that would allow residents to deduct their out-of-pocket medical expenses, including emergency visits to the ER, from their state income tax. “This, they all agreed, “would be a huge benefit to Coloradans.”