Residents of the Arkansas River Valley who pass through Johnson Village have asked for months now – what is going to happen to the building that used to house the Coyote Cantina? That question has been partially answered in the person of Chuck Huggs, who purchased the building,  located at 12985 U.S. 24/285 in Johnson Village in Sept. 2016 with hopes of redeveloping and revitalizing the popular location. He has poured resources into remodeling the structure, including an outside patio with jaw-dropping views of Mt. Princeton and the Collegiate Range. 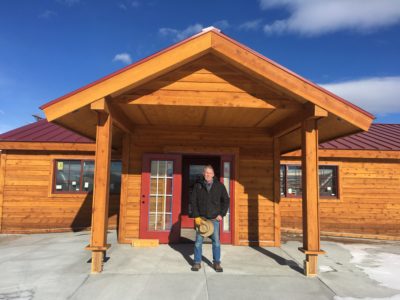 Chuck Huggs has nearly completed renovations of the former Coyote Cafe. After purchasing the site in 2016, he is beginning to look for a tenant for the front restaurant portion of the structure.

As of January 2019, Huggs is finally ready to begin his search for a tenant to operate out of the old Coyote Cantina location.

“The property has so much potential,” said Huggs, “I think this is the best location in Chaffee County.”

When the property and the Coyote Cantina came under foreclosure, Huggs saw potential.

“The Coyote was a really popular place,” recalled Huggs. “This was an opportunity that comes by once in a decade.”

“They [Coyote Cantina and the Dinner Bell] had a real business here. People traveling this route knew this was a good place to eat,” said Huggs.

Huggs’ plans for the building are two-fold: first, he would like a tenant to occupy the front, 3400 square foot space. Second, Huggs wants to use the rear portion of the refurbished structure, approximately 2400 square feet, to relocate his saddle refurbishing business from its current location on the south side of U.S. 24/285 in Johnson Village.

Although Huggs says he is open to renting the front portion of the building to any desiring business, in his view the building design and location is ideal for a restaurant.

Huggs is committed to providing a tenant with quality infrastructure and appeal. The dilapidated building required thorough repairs and refurbishment; including a new foundation along the east wall, energy efficient windows, and new floors.

Huggs wanted to renovate, but also preserve the character of the Coyote Cantina and the Dinner Bell. With the help of local architectural engineer, Ron Southard, Huggs was able to do both. Southard, Huggs said, was instrumental in finding a way to make the building more usable but preserve the character of the area and of the buildings previous occupants. 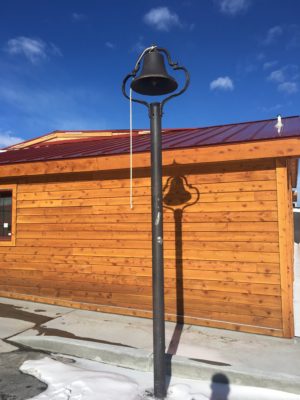 The renovations protected the historic dinner bell, the hospitality symbol of the restaurant called the Dinner Belll, which operated from the structure in the 1950s.

Southard directed local contractors to construct a new entryway with Huggs’ instructions, and pour a beautiful concrete outdoor seating area. He also spared the original dinner bell from the 1950s — the Dinner Bell’s namesake – – and re-sided the entire building with wood siding that embodied the character of the mountain town.

The patio is handicap accessible and is enclosed by a wooden wall, complete with picture windows, to act as a windbreak while still offering the mountain views that give the patio such appeal.

Because of the effort and thought he has dedicated to the property, Huggs has high expectations for a future tenant.

Huggs has put in the groundwork for the building, and expects that a tenant will outfit the building properly to meet their own needs and desires. That being said, Huggs has two offers he says he hopes potential renters might consider.

Under one concept, Huggs expects the tenant to complete refurbishment to their own specifications and will rent the location for $6,000 a month. The lease for this concept would be a lifetime lease, but would expire when Huggs passes away. Upon his death, the renter would inherit the property.

“When I die, whoever is leasing will inherit the property,” said Huggs. “By paying rent, they will be putting in an investment into something they will own.”

In the second concept, Huggs would pay half of the final refurbishing costs (deducted over time from monthly rent costs) however the renter would not inherit the property when Huggs passes away.

Either way, Huggs is excited to see what renters are interested in occupying the space. “I’m willing to work with someone with a reasonable timeline,” said Huggs. “The property really has so much potential.”

Huggs’ is clear about his aspirations for a restaurant operating out of his building. “I want somewhere people can get a good meal at a reasonable price and be a part of the community,” said Huggs. “Someone who provides the same level of service that used to be here. I’d really like to get back to that.”