The news earlier this week that Angel of Shavano has ended its contract with Chaffee County to provide free-to-consumer recycling, ending April 8, caused a shockwave across the county. The Chaffee Board of County Commissioners (BoCC) called a special meeting Friday morning, April 2, to hear from current waste removal providers and determine potential ways to fill the recycling void left by this departure.

The short-term conclusion; the two services now available in the county may suffice for now. The future for the county landfill, and recycling efforts in the county, will be seen in the data for 2021. Over the next few years, the county will continue to calculate diversion rates for the percent of trash that is being recycled.

“All people in the county have a vested interest in trying to resolve this problem,” said Commissioner Greg Felt in his opening remarks. ” I don’t wish on any future county commissioner to have to try to find a new landfill.” 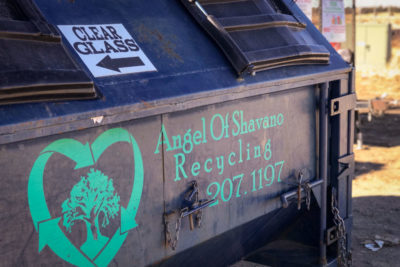 Like landfills across the state, the Chaffee County landfill is slowly filling up, requiring new ways to reduce the amount of garbage going into the site, and the space that it takes up. Chaffee County increased its landfill rates as of April 1, noting that the increased county population and construction are adding to an already-growing waste challenge.

For the past two years, Angel of Shavano Owner Mickey Barry has raised the topic of the increasing pressures on recycling; the disappearance of China as a plastics recycler, the volatility of the markets, and the pollution of recycle streams with non-recyclables. Angel of Shavano has the distinction of being the longest-serving program with sustainable drop sites in the county.

“We appreciate the opportunity the county gave us, specifically the public; it wouldn’t have worked for as long as it did without you,” said  Barry. “We hate to go, but we have to make these moves for our family.”

“The current model doesn’t work. There were lots of problems with people mixing things,” said the Director of General Administration Bob Christiansen. “It was more difficult to pull real recyclables out of the bins and it needs policing. It needs to be pure to actually recycle them and a lot of the bins got polluted. There may be a silver lining to make sure if we are moving forward, that what we are giving to recyclers they can pass through and get paid for it.”

The BoCC asked two waste management companies, Chaffee County Waste and Waste Management, both with a presence in the county with representatives on the call, to recap their current recycling work and ability to expand services to meet the need.

“We take all our recyclables to Colorado Springs for recovery,” said David Royer of Chaffee County Waste. “In January we changed our setup to provide a recycling bin. We’ve got 1,700 to 1,800 recycling customers in Park, Lake, and Chaffee counties. Our yard is in Buena Vista by the [Central Colorado] airport.

The company has been serving Chaffee for ten years and has five years of experience offering recycling services. It began offering recycling as a free service (part of its monthly charge) and now charges separately for it. The recycling materials all go to their recycle center vendor in a dedicated truck.

He added that “Chaffee County seems to want this service and we’re here to provide it. Our single-stream commingled recycling seems to be well received. We provide recycling to the Salida School District … What we have is a single stream commercial and a residential pickup service.”

Royer pointed out something that might seem counterintuitive: “It’s been seamless, there’s not much contamination, since they have paid for it. Before, when it was free, we got a lot of trash…. we can’t take contaminated recyclables to the center, we get fined.”

Asked by Felt about the company’s ability to cover the more rural parts of the county, Royer said they could and do cover the entire county, with the exception of people who have built homes in areas that trucks can’t get to.

District Manager Scott Martinez said that Waste Management has a history of recycling in Chaffee County, and that it is one of the biggest waste management companies in the country. It bought the Angel of Shavano recycling commercial routes from them a few years ago and has partnered with the organization on source-separated recyclables.

“We’ve stayed away from the single-stream mostly because of the carbon footprint. Our recycling has been limited, but low contamination.”

But as a next step, Waste Management is moving to a single-stream system. “We are converting from our three to four bin system to one bin for residential and our commercial accounts … we currently do charge for our source-separated recycling. It’s minimal, but … the charges will probably go up based on having to transport it to one of our MRFs  (materials recovery facility) on the Front Range.”

“Given the sudden nature of this change, and the fact it is reasonable to resolve some things quickly… what is your sense of where we stand in terms of a gap from where we were? What is the adequacy of what is being proposed or already in place?”asked Felt.

The providers responded that because the county has been subsidizing recycling for so long, people have the idea that recycling is free – so consumer education will be important.

“We need to communicate the value of recycling to consumers, on both a personal level and a community level,” said Erica Wohldmann-Gift who worked with Greater Arkansas River Nature Association (GARNA) on recent waste diversion studies. “Prolonging the life of the landfill, and protecting our water are two good messages.”

Martinez added that Waste Management would be glad to be part of a community-wide education effort.

“Working with GARNA closely, there may be things we could do in conjunction with the landfill … we could do better with composting, better with our metals,” said Felt. “This situation; it’s important that people know we are trying to reduce the amount of materials going to the landfill: it’s partly environmental, partly to increase the life of the landfill.”

“With challenge comes opportunity and with this, we have the opportunity to look at recycling in new ways,” said Commissioner Keith Baker. “It’s like other things that have happened; this is catalyst for us to look at other ways of doing things.”

“We know what is happening on April 8; we have to decide what happens on April 9,” said Commissioner Rusty Granzella. “I liked what I heard today.”

The BoCC decided to allow market-based solutions to present themselves. They agreed to let the two companies see what they can work out in the short term and will convene a work session on this in the next month or two, with the municipalities, GARNA, Chaffee Green, the Chaffee Landfill, and others, to assess how well the problem is being addressed, and whether more innovative approaches will be necessary.