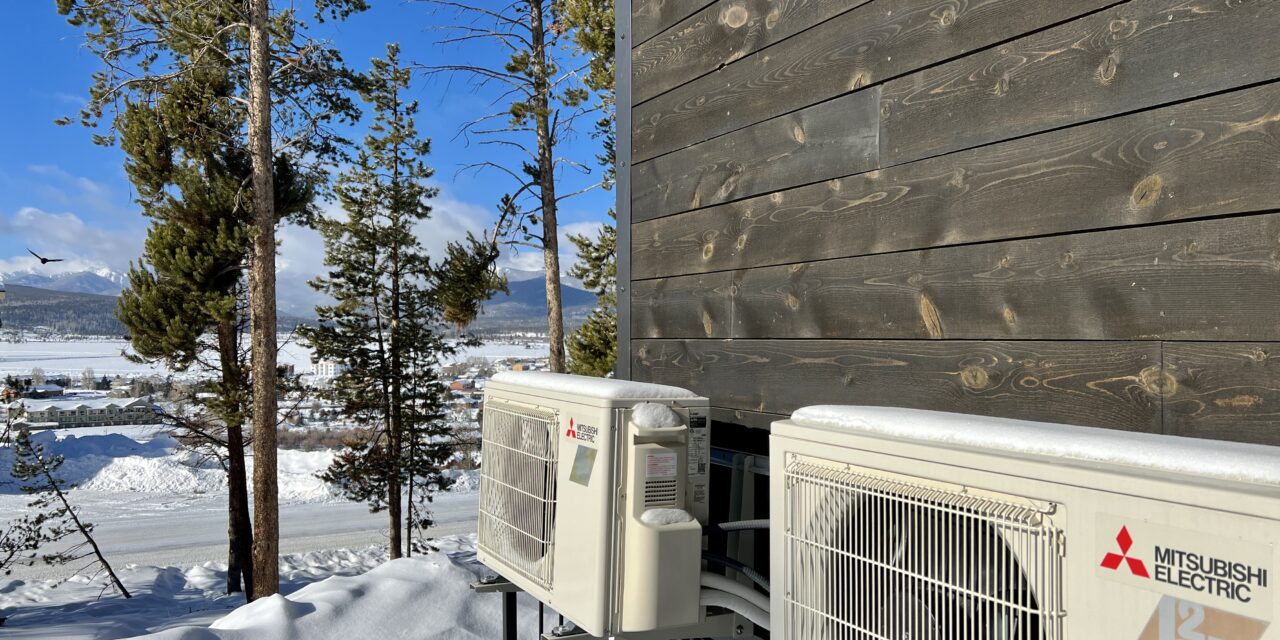 The coldest temperature this winter at the new home of Joe Smyth and Kristen Taddonio was 17 below. They live in Fraser, the Colorado town that used to get far, far colder.

Still, that February night was cold enough to test the design and technologies employed in construction of the couple’s 1,176-square-foot house. They insulated carefully, of course, and have solar panels. Even after charging their electric car, their house produces more energy than it consumes.

An air-source heat pump was central to their mission in creating a net-zero home, one gutted of emissions from fossil fuels. It extracts heat from outside, even on chilly nights, to warm the interior.

The Mitsubishi model used at the Fraser house promises to deliver the necessary indoor heat even when outside temperatures dip to 13 below. To supplement the air-source heat pump should temperatures dive to 30 below, as was once common, the couple also installed electrical-resistance heating. It wasn’t needed.

Getting this right during housing construction costs less in the not-very-long term. Building permits for 48,200 housing units, both single-family and multi-family, were issued last year, according to the Colorado Business Economic Outlook. That’s like adding a new Greeley each year along with a few small towns.

Retrofitting our older buildings is laborious and expensive. I know, because my house was built in 1889. You don’t swap outbuildings the way you would computers or cars.

Several bills working their way through the Colorado Legislature this spring would nudge Coloradans toward low-carbon and no-carbon technologies. All cost more upfront but save money, sometimes lots of it, over time, while reducing or eliminating emissions.

Carrots would be offered by SB22-051 to those who purchase air- and ground-source heat pumps. Purchasers would be allowed income-tax exemptions of up to 10 percent of the purchase price.

Other provisions in the bill approved by the House Energy and Environment Committee offer tax incentives for energy storage and building materials with low levels of embodied carbon.

“It is just more efficient to move heat than to create heat,” said Rep. Mike Weissman, a Democrat from Louisville and a bill supporter. “I think we can do some good here by amending that payoff time curve just a little bit. That’s something that we need to do to facilitate our transition” from fossil fuels.

The second bill, HB-1362, would require towns, cities, and counties to adopt the 2021 International Energy Conservation Code before 2025. This latest code advances efficiency by 8 percent to 9 percent compared to the 2018 iteration.

The Colorado Municipal League objected to loss of local control. Two representatives of rural areas described it as onerous for small towns despite $3 million earmarked for training. Homebuilders argued that the advanced standards would make already expensive housing less affordable.

Howard Geller, representing the Southwest Energy Efficiency Project, cited a study from the Pacific Northwest National Laboratory that found the latest code would indeed add $200 to the cost of an average mortgage in Colorado built to this latest code. Lower energy costs will more than recoup that extra cost, he said, even in the first year.

Rep. Tracey Bernett, a Democrat from Longmont whose district includes nearly half the 1,084 homes destroyed by the Marshall Fire, said she sponsored the bill with full confidence it will help, not harm, her constituents.

These bills both moved from the House committee on strictly party-line votes,  with Democrats in support. A third bill, HB22-1381, has bipartisan sponsors — and bipartisan support. It would allocate $20 million for grants to further geothermal development by tapping the year-round heat of 55 degrees found 8 to 10 feet below the surface.

As with air-source heat pumps, sponsors said the market needs to be nudged to adopt technology that costs more upfront than installing natural gas infrastructure but pays off in the long term. “This is something we don’t do enough of,” said Rep. Hugh McKean, a Republican from Loveland, who is installing geothermal in a house he is constructing.

“I really like this bill,” said Perry Will, a Republican from New Castle, citing the experiences of family members with the technology at Rulison and elsewhere.

Featured image: The air-source heat pump on the house was central to their mission in creating a net-zero home. “It recently won a “heat pump beauty contest,” said Taddonio. The view from their house isn’t bad either.