Fox News filed a motion on Tuesday to dismiss the $1.6 billion defamation lawsuit filed by Dominion Voting Systems following the 2020 Election. In doing so, it is attempting to claim that what it chose to cover constitutes its First Amendment rights.

Dominion, with headquarters in Denver, Colorado, is among the largest manufacturers of voting machine equipment and its technology was used by more than two dozen states last year. The election technology company brought the defamation lawsuit against Fox News Media and 14 other individuals and news media in March, accusing them of propagating false, “rigged election” narratives that hurt its reputation and endangered its employees.

The lawsuit described the cable networks of Fox News and Fox Business as active participants in spreading the false claim that the company had somehow changed vote counts to manipulate results in favor of now-President Joe Biden.

“Fox sold a false story of election fraud in order to serve its own commercial purposes, severely injuring Dominion in the process,” according to the lawsuit filed March 26 in Delaware. “If this case does not rise to the level of defamation by a broadcaster, then nothing does.”

Fox News Media is part of the Rupert Murdoch-controlled cable group. This case, and a similar one filed by election company  Smartmatic  (which Fox has also moved to dismiss) are considered test cases in an expanding legal effort to curtail the politically motivated disinformation that continues to be spread about what is, in fact, nonexistent election fraud. All of it appears focused on the baseless attempts by former President Donald J. Trump to undermine President Biden’s clear victory.

In filing for dismissal, Fox News has taken a different tack than the NewsMax Media Inc, which a few weeks ago apologized to Dominion for its role in propagating disinformation about the company. In that case it issued a formal apology specifically to Dominion’s lead technology Vice President  Dr. Eric Coomer, for its role in disseminating false information about him.

NewsMax came to an undisclosed settlement with Coomer, the terms of which have not been disclosed. Coomer, whose normal residence is Salida, Colorado, has been in hiding for months due to threats made against him by supporters of the false election fraud claims.

In its 61-page response filed in Delaware Superior Court, the Fox News legal team argued that Dominion’s suit was, in fact, a threat to Fox News. It set out the theory that by bringing the suit, it threatened the news organizations’ First Amendment right “to chronicle and assess newsworthy claims in a high-stakes political contest.” 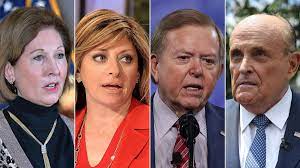 In a story this morning in The New York Times, the publication pointed out that real news organizations report on, chronicle and debunk false and misleading information, including viral social media claims. But Fox News, NewsMax and several Trump spokespeople, including the former president, spread what has come to be known as “The Big Lie” far and wide across social media platforms.

According to Fox;  “A free press must be able to report both sides of a story involving claims striking at the core of our democracy, especially when those claims prompt numerous lawsuits, government investigations, and election recounts.” The motion adds: “The American people deserved to know why President Trump refused to concede despite his apparent loss.”

But according to the Dominion Voting Systems legal team, the Fox narrative is a false one that was not substantiated by truth or facts. Their filing cited instances where Fox hosts, including Lou Dobbs and Maria Bartiromo, uncritically repeated false claims about Dominion made by Mr. Trump’s lawyers Rudolph W. Giuliani and Sidney Powell.

Dominion lawyers will have 14 days in which to respond. In their initial lawsuit they wrote, “Lies have consequences. Fox sold a false story of election fraud in order to serve its own commercial purposes, severely injuring Dominion in the process.”

But what is a stake may be more than a test of whether a news organization that does not tell the truth can claim First Amendment protection for itself and its lies. What is at stake may also be citizen confidence not just in our election system, but in democracy itself.