Fremont’s Clerk and Recorder Justin Grantham might be a Republican, but this has not stopped him from calling out Colorado District 60 Representative Ron Hanks for his multiple attempts to cast doubt on the results of the 2020 election, repeatedly saying that the November election was rigged across our state and country.

(Fact check: Every Republican challenge to the results of the 2020 election has been thrown out of court, and it has been confirmed that there was no election fraud.) 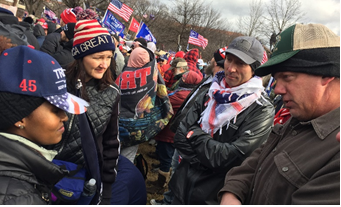 Dist. 60 Representative Ron Hanks attended the Jan. 6 Trump events in D.C. prior to being sworn in. While he initially said he did not go to the U.S. Capitol, several days later he changed his story. Image courtesy of Hanks’ website.

In a letter to Hanks, he pointed out that if Hanks is so concerned about election integrity, then why hasn’t he taken up Grantham’s offer to do a tour of his Clerk and Recorder office, to ask questions about election processes and play a role in educating the public on how elections work, rather than spreading disinformation?

“I have been specifically following your concern over election integrity. I remember when I invited both you and Representative Luck to come to my office for a tour and ask questions about the elections. This was in good faith hoping that you would accept my invitation, as a lot of disinformation was circulating before and after the election and to have open communications between fellow elected officials,” wrote Grantham.  “My invitation to you to tour my office behind the scenes never happened … If election integrity is as important to you as you have been fighting it would have been a priority. I am truly surprised you never made the time to have a conversation with the chief election official of the county that you reside in and represent.”

He went on to chastise Hanks and a Republican Study Committee of Colorado (RSCC) regarding a meeting about the election during this past legislative session. Grantham wrote that while he was under the pretext that it was supposed to be a discussion and an educational meeting to explain how elections are conducted, “This meeting was not about collaboration, but instead, it was an all-out attack on Republican Clerks about the 2020 election. The Clerks that attended were defending against mathematical and statistical probabilities, “possible” computer system vulnerabilities, election processes, rules, laws, and threats of violence on more than one occasion … it became clear that the meeting was about trying to find someone to blame for President Trump’s loss in the November election.”

Hanks who represents Fremont, Chaffee, Park, and Custer counties, has repeatedly made claims that the election was fraudulent (An ironic stance given Hanks himself was elected in that election.) Grantham pointed out that Hanks has lied about his contact with the county clerks in the counties he represents.

In fact, Grantham listened to a July 14 radio show live stream in which Hanks claimed to have spoken to all the County Clerks in his district about the election, except Chaffee County Clerk and Recorder Lori Mitchell. Grantham said that he had confirmed that Hanks hasn’t been in contact with any of the county clerks in his four-county district. He pointed out that if Hanks bothered to get educated about how elections actually work, including getting trained as an election judge, that he might just stop undermining voter confidence in Colorado’s election processes.

He ended with a ringing endorsement of the state’s election processes and the county clerks sworn to uphold their constitutional duty. “As the elected official, designated election official, and chief election official of Fremont County, I encourage you to come into my office or other clerks’ offices as other constituents have done in your district and talk to the professionals about elections. We are the trusted source of information because we are the boots on the ground conducting these elections.”