While addressing a crowd of Salida’s youth in Riverside Park on Thursday, May 16, members from GARNA (Greater Arkansas River Nature Association) and Native American Research and Preservation, Inc., demonstrated the importance of conservation and respect for historical structures and items to Salida sixth graders. 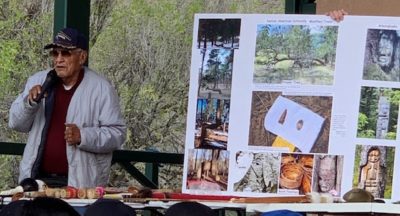 The members set out artifacts, photos, weapons and instruments so that the attending students may engage all of their senses while learning. Southern Ute Elder, 87-year-old Dr. James Jefferson, explained that the ancient peoples used all of their senses during the learning process “so we may not only further science but also gain an appreciation for the land that provides us with all we need.”

The major theme of the presentation was how the ancient native people drew upon all of their resources and experiences to further their understanding of science and, in doing so, improved their way of life. They were able to create instruments for ceremonies, more efficient weaponry for defense and hunting and build various types of efficient housing. Most significantly, they were able to do this while having a minimal impact on the land around them. 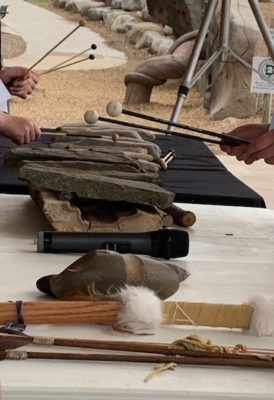 Jefferson also emphasized that in order to move forward and progress scientifically and socially, Americans must not disturb or destroy that which has been left by those who have lived on this land before us. He stressed that to do do so would irrevocably damage ourselves for in these sites, we find our soul. 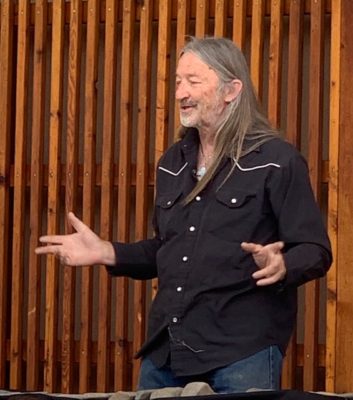 The second part of the presentation included a demonstration by local musician Jeff Shook. Shook showed the audience how native people would use items around them such as rocks to create musical instruments. He held up a large piece of flint and explained to the children how this type of rock could be chipped away, thus giving control over the pitch the rock would produce when struck by a mallet. The rocks lined up on the table in front of him were struck in a way reminiscent of a modern-day xylophone, creating a hauntingly beautiful, bell-like chime. After his presentation, the children were encouraged to play the instruments and to handle some of the artifacts.

GARNA Executive Director Dominique Naccarato explained that GARNA has “always been big on teaching kids stewardship of our natural resources,” and that a large part of that is making a personal connection to the “land to which we belong.”

Teaching respect for our natural surroundings and recognizing that the gentle mark the native people have left for us to learn from is priceless lessons that, if damaged or ignored, will be lost to time.

The Native American Research and Preservation is currently working with Colorado College to study and ultimately preserve historical sites all over Chaffee County. Those interested in getting involved should contact Ken Frye at 719-657-3161. 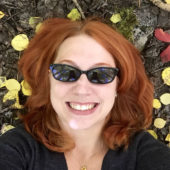 ReporterWright, who covers arts, culture and community events, is a lifelong Colorado resident. A history and English major, she is versatile writer who writes on a variety of subject areas. In her spare time, she enjoys hiking and playing ice hockey, as well as singing and acting with several groups around the state. She is a retired professional cellist and is active in theater and the arts.