“A peace which depends upon fear is nothing but suppressed war.” 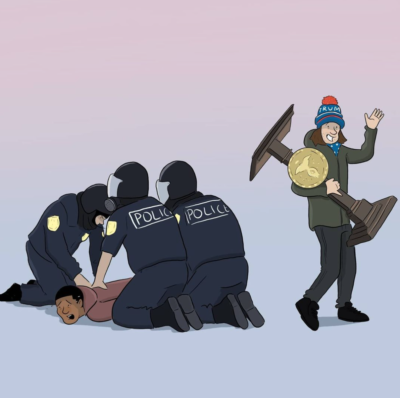 Millennials and Generation Z flocked to Instagram this week, highlighting the disparity between the treatment of protestors in this past year’s Black Lives Matter protests and the mobs who broke into our country’s Capitol building on January 6.

Many acknowledged that this was preventable and has been building for the past four years, something few media outlets are discussing. Other conversations stemmed from the privilege that was on display at the capitol, some even going as far to insinuate how the events would have transpired if these domestic terrorists had been black or people of color.

Others addressed the “this is not who we are” rhetoric, specifically spotlighting President Biden’s speech.

There is an understanding that this is the same American that pillaged indigenous people from their land, enslaved millions and created internment camps. They believe the masses want the government and its people to do better, not make excuses or fallback statements.

But others claim that, like it or not, “this is who we are” and add that this country was founded on white supremacy. To many it is evident that this system is still prevalent not only within our society, but evident in our government and policing systems.

The outrage from millennials and Gen Z was palpable. 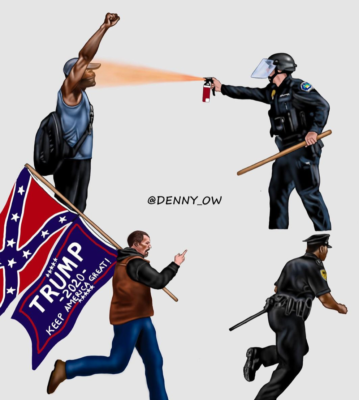 Image by Dennis Owusu-Ansah or better known as @denny_ow. Image courtesy of Instagram.

There were many posts this week that hosted side by side pictures of the Black Lives Matter (BLM) protests in which peaceful protestors were gassed, handcuffed, beaten, and arrested, and yesterday’s insurrection when some law enforcement appeared to pat the insurrectionists on the back and open doors for them.

Others posted quotes such as “when the looting starts the shooting starts.” over pictures of what mainstream media and legislative leaders have called seditionists and insurrectionists.  The quote above was famously said by President Trump in response to BLM protests.

“Infuriated by the drastically different response by authorities to peaceful protest”

“I’m tired of living the chapters of future history textbooks.”

“Trump’s message sounded like what an abusive husband says to his wife.”

“Very scared to see what comes next of his abuse.”

“Truly disappointed and frustrated all around. A laughingstock for the globe and humanity.”

“Completely outraged and angered by it all. True change is needed. This just reinforces that.”