To Get to Net Zero Carbon Emissions, Geothermal is Going to Play Some Role in Colorado.

The first, and largest, meeting in 15 years focusing on Colorado’s geothermal energy potential was convened earlier this week at Mt. Princeton Hot Springs Resort in Nathrop. Current Governor Jared Polis has made a point of including the development of geothermal energy — energy contained in layers thousands of feet below our feet — in the state’s aggressive energy independence goals.

The solution, say the experts, is to tap an energy resource beneath our feet, and it’s not oil or gas. Geothermal energy conversation fills that delta. The question is how best to access and use this geothermal resource, of which Chaffee County apparently has a generous reserve. 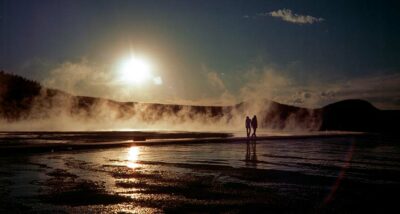 The event, led by former Colorado Governor Bill Ritter included representatives of the Center for the New Energy Economy at Colorado State University, as well as two experts on geothermal energy; one focusing on the state’s potential, the other covering the geothermal energy potential here in Chaffee county.

Some 35 or so people attended, including the Colorado Energy Office, local government officials, geothermal experts, state policy experts,  public utility officials, scientists, and representatives from the Colorado School of Mines.

“We’re going to start with a 35,000 ft. view of energy policy,” said Ritter. “Tom (Plant, a Colorado Public Utility Commissioner) and I have worked on clean energy policy since 2006. We looked at the levers for energy, transition environmental NGOs, how to get to zero carbon by a date certain. The Biden Admin says 2035 – utilities said ‘that’s tough – get to zero by 2040.’ The most ambitious utility in the country is Xcel Energy.”

Ritter added that the Inflation Reduction Act is one of the biggest factors that will fund the transition, but that “nobody has the answer to net zero [carbon]. Xcel has an 85 percent solution. Polis wants to get to zero by 2030. This is a difficult lift. There is a gap between the most ambitious utilities and technology to get to [net] zero.”

In several areas of the state, including here in Chaffee County, the question is how best to access and use this geothermal resource (without getting into the differences between geo transfer or geothermal). Getting to it is apparently more than mining hot water temperatures.

“We’re looking at low temps and high temps and repurposing wells,” explained Carter. He referenced Colorado’s presentation to the Western Governor’s Association that touted “The Heat Beneath Our Feet” as a western solution to carbon-free energy.

“There are three different programs that HB22-1381 funds, “said Carter. We are accepting applications for a Colorado geothermal advisory group too.

The purpose of the second bill SB22-118 — is to encourage geothermal energy use. Its intent is to cover educational and awareness efforts, hot springs, and definitions of geothermal systems. “Once the public utility commission takes this up we’ll know more,” said Carter.

Carter reviewed the timeline for the granting program, saying that Q1 2023 is devoted to hiring an administrator, Q2 will focus on requests for applications, Q3 the grant funding will begin, and by Q1 2024 the next grant award cycle will begin.

Overview of Geothermal in Colorado

Colorado School of Mines Geological Survey leader Dr. Paul Morgan gave a high-level view of how much of what type of geothermal energy lies within Colorado.

“Geothermal electric power needs a hot resource of at least 300 degrees F,” he explained, reviewing the role that heat pumps are beginning to have, in replacing natural gas heating systems. “Most are binary systems; a refrigerant that drives a turbine; that drives a generator. The new bill has construction credits for ground-source heat pumps

“With geothermal direct use, we need something to get the heat out of the earth. It’s great but a limited use. We look at geothermal in relationship to electric power. It’s a nonconsumptive use. With a high flow rate 1,000 gal./minute – electric power production can be put on existing power lines.”

Morgan stressed that this could be done with the geothermal energy that lies under and to the east of Mt. Princeton, and the southeast section of the Arkansas River Valley, in the Waunita Hot Springs area and the Raton Basin west of Trinidad. He gave a local example.

“There is a potential Buena Vista Project piping the geothermal from Mt. Princeton down to the prison. They use more gas than anyone here. Replacing the steam system with geothermal or it could be a whole southern BV system,” he added. “This is a multi-million dollar proposal, but combined it could cover its cost in a few years, and offers significant reduction of carbon pollution in the valley.”

The best site to start Colorado geothermal energy production, explained Dr. Fred Henderson, representing Mt. Princeton Geothermal LLC is in a basin that is 2,500 to 6,000 ft. deep. “If the geothermal is 300 degrees F, it’s scalable and if it can produce a gigawatt of power, then industry and public utilities can use it; Sangre de Cristo, Tri-State, Xcel Energy as a backup to wind and solar grids.

“It could replace the baseline of coal and we’re closing those coal plants,” commented attendee Tri-State official Duane Highley.

So why hasn’t someone already begun to develop geothermal energy in Chaffee County? The answer is financial proof. Before the U.S. geothermal industry will invest in Chaffee or anywhere in Colorado, someone in Colorado must fund the deep well testing and reservoir confirmation. It’s called a “geothermal bankability report” – and this has to be done before a bank — any bank — would be willing to loan money to develop this energy source

“In exploration and development we look for a deep structural faulted basin or rift with high heat flow — it’s cross structure seismic section and more,” explained Henderson. “Chaffee has a geochemistry thumbprint that is different – that lends itself to development.” He estimates that there are five to 10 megawatts of geothermal energy beneath Chaffee County.

As to why this hasn’t been noted before, Henderson was emphatic: “Since the 1970s, the exploration has been in the wrong place — next to the hot springs. That’s the wrong place. There’s an offsetting fault that goes down the valley – the geothermal goes east – it’s in the valley in the rift zone, NOT under the creek.”

Referring to it as the Rio Grande rift zone, Henderson said it runs from roughly Leadville down through the valley from one to two rifts to Los Alamos, to the Mexico and New Mexico border. “It’s been splitting apart for 25 million years and the Collegiate Range has uplifted about five miles over the last 10 million years …the recivity goes down six miles, but out by Rodeo Drive it’s its two miles below the surface .. the flow should be the direction of the river.

There are 95 hot springs areas in Colorado, and Henderson estimated that 75 of them offer geothermal energy potential. But the group acknowledged this hard truth — someone in Colorado must fund the deep drill testing and reservoir confirmation before the industry will in geothermal energy in Chaffee County.