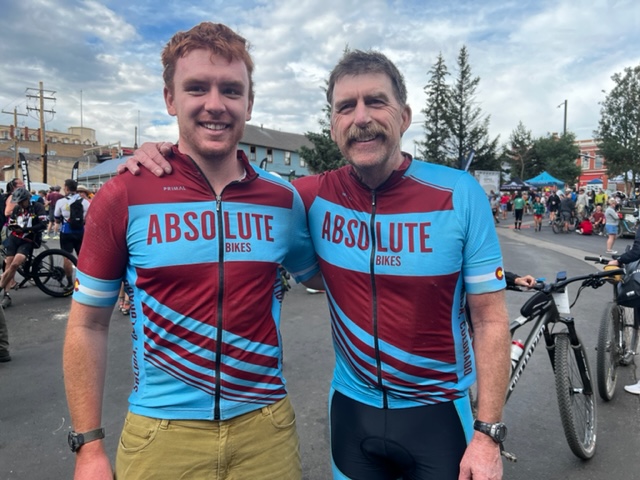 They call it “the race to end all races,” and “the race across the sky.” For good reason. The Leadville Trail 100 Bike Race is one of the premier mountain bike races in the world.

This means that this past Saturday didn’t just mark a quarter century of participation in this all-important 100-mile race for Salida resident Shawn Gillis, it was indeed his race to conquer the record books. 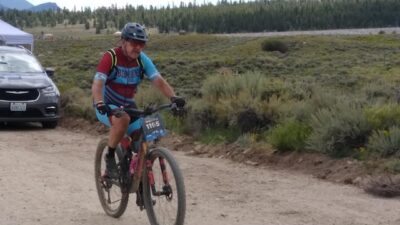 A snapshot as Gillis biked by during the Leadville 100. Courtesy photo.

“It is definitely a bucket list event, a lot of people travel from all over to do it… and I’ve done it enough times that it’s a reunion with great friends. I’m among a few people I know who have done it a bunch of times,” says Gillis. “We’re all getting older. We all have families. I have a good time riding and seeing friends, and we are so lucky we don’t have to travel across the country to participate.”

He describes the race route as “about 95 percent the same, as the field sizes get bigger, they had to do some changes. For instance, they changed the single track that was a bottleneck in the early years — they added about a mile of road, then there is a steep decent road at about mile 35 to 37. it was a little rougher transition. They added single track to replace that.”

“Most of their changes have been subtle and they are appropriate,” he added. “For instance, water run-off on a steep trail can change a transitional surface from marbly to rocky.” 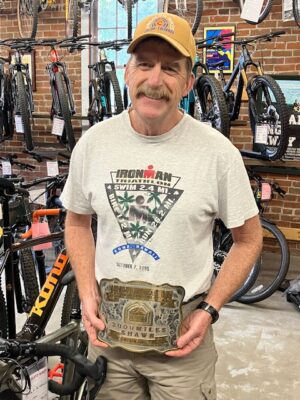 Shawn Gillis holds the “20-year belt buckle” awarded the year he achieved 20 Leadville 100 finishes. “You can’t sit down wearing it,” he notes. Photo by Jan Wondra.

The fact that Gillis is also the owner of Absolute Bikes has nothing to do with the finish, but probably a lot to do with the pride of accomplishment that Gillis feels after completing the race. That actual race is only slightly older than his 25 years of participation in it. He admits that these days the race comes with more soreness than in his earlier decades.

“It gets tougher as we get older, and it’s a family affair. Dena, my wife works on the race and our son Camden has completed three races.” Gillis chuckles and adds, “It’s exciting to be in the same event, but he’s faster now.”

The Leadville Trail 100 MTB is the second oldest of the well-known 100-mile marathon mountain bike races held in the United States. (The oldest being the Wilderness 101 in Central Pennsylvania.) It was first run in 1994.

Twenty-eight years later the Leadville 100 is still one of the best marketed, attended and known marathon events in mountain bike racing. Entry to the event is controlled and restricted to the best of the best. This means that Gillis’s finish for the 25th year in a row places him in a very elite category of mountain bike racers.

Just getting into the Stages Cycling Leadville Trail 100 MTB has always been difficult. LT100 MTB Qualifiers are long and tough, and there is lots of climbing. 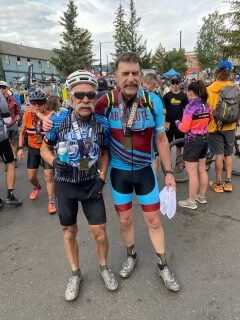 Those who know say the qualifiers “are similar to the classic course at Leadville in that they avoid technically demanding single-track trails.” They consist mainly of rugged gravel and dirt jeep roads. Doing well in a qualifier event could not only gain you entry into the LT100 MTB, but it could also boost your corral starting position in the “Race Across the Sky”.

For Gillis, he says that after 25 years of participating, preparation for this big race is very different.

“Conditioning now versus then is very different. When I was young, I was active enough then to just jump into the event. Now, I have to change my schedule to get some longer rides in, I don’t do as many as I need, but it’s having a schedule. It’s like I say, I have two choices; I can sit down with friends, or get a few base miles in … before, in my 30s I didn’t need that because we were so active all the time. We didn’t have to plan and now we do.”

He admits that completing the race the past few comes with a lot more soreness, and a longer recovery time. “In our 30’s we think we’re invincible. Now in our late 50s, we’re not as spontaneous.”

He describes the advantage of training at 7,000 ft. (Salida) and those who come from near sea level. ‘There’s hydration, muscles, sleeping, and some other things we take for granted from living in this part of the state. We’re at the lowest part of the valley at 7,000 ft. so many come from low altitudes, and it makes it harder during the event — even for them to judge the proper amount of hydration so you’re replenishing but not overdoing it….  there’s a reason we live here, but for events like this we forget sometimes. We feel lucky!”

He added, “You know how much colder and rainier Leadville is. It is altitude-challenged, while Salida is an amazing altitude, it’s really good preparation for riding and relaxing afterward. 7,000 feet is much more general rather than 10,000 ft.

Gillis gives some of the credit for continuing the sport to the riders to which his racing has introduced him. “The group of riders and friends up there are amazing. We have a reunion of people who we only get to see once a year, or once every couple of years, due to schedules. Our family is closer and we have lots of friends who come up from Salida.”

Asked how long he intends to keep racing the Leadville 100, he gives a half answer. “The goal is to do it a few more years, I’ll keep doing it for as long as I can.”

How about inspiring others to get involved, I ask?

“The first-hand experiences are invaluable. My son and daughter both came back from college this summer, and it was great to hang out with them and go riding, I still love riding my bike, even though we say, we have to train, we have to do this or that, it’s not forced  — it is actually a pleasure…   to ride.”

Featured image: Shawn Gillis right, and his son Camden Gillis on the left, celebrate the completion of the Leadville 100-mile mountain bike race in Leadville this past weekend. Courtesy photo.