Government shut down affects federal workers across the country

The federal government shut down that began at midnight Friday, Dec. 21, after President Donald Trump declared that he would not sign the short-term funding bill, shows no signs of ending before the new year. The shut-down has affected nearly 740,000 federal workers spread across the country from Washington D.C. to the west coast; meaning hundreds of thousands of families got no advance notification that they were being sent home without pay until the shutdown occurred. 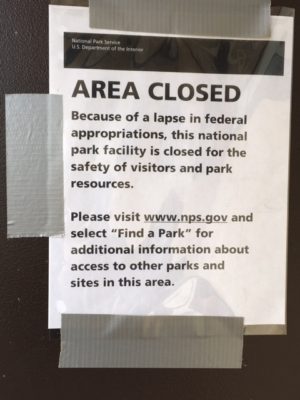 A sign in the Washington D.C. Marina along the biking and walking trail makes clear the government shutdown is real.

The federal shutdown affects several major departments of the U.S. Government including the Departments of State, Agriculture, Interior, Treasury, Justice, Commerce, Homeland Security, Transportation, the Environmental Protection Agency and Housing and Urban Development. It extends to dozens of smaller independent agencies, and affects both full-time employees and contract workers. Locally, employees of the Federal Housing Administration, the U.S. Forest Service, the Bureau of Land Management and the U.S. Fish and Wildlife Service will be affected. Many of those employees will continue to be required to work; they just won’t get a regular paycheck.

While many national parks will be accessible to the public in the short-term, there will be no trash collection or park rangers on duty, and rest rooms will be closed. Historic homes and areas of parks where snow plowing is required will be closed. But other roads and trails and open-air memorials are expected to stay open.

The collapse of talks between Trump and Republican leaders, that would have put into place a short-term spending bill to keep the government funded to the end of February 2019, left dozens of federal agencies scrambling to put plans into place. Only days earlier they had been told to use any money left in their budgets to stay open for as many days as they could, while the bill was finalized. Then on Dec. 20 the Office of Management and Budget started notifying several federal agencies (which make up about a quarter of the government budget) to prepare for a shutdown.

Only two days earlier Trump had indicated he would sign the bill into law, then suddenly reversed course when conservative media became critical of his inability to fund “the wall” he has promised his followers. Trump has long said that he wants $5 billion in funding for the construction of a wall along the U.S.-Mexico border. Just days before the shutdown he had announced that he would be “proud” to shut the government down if Congress didn’t accede to his demand.

The shutdown occurred at the start of a holiday week when many employees were already on vacation, so notifying federal staff whether or not they are now on unpaid leave is a continuing problem. The American Federation of Government Employees, which is the largest union representing federal workers, confirmed that it hasn’t received any operational instructions for how to curtail activities. Because government offices were closed Christmas Eve and Christmas Day, Dec. 24 and 25, most agencies didn’t even begin to notify employees until Dec. 26.

Lawmakers had already funded around 75 percent of the government through Sept. 2019, the fiscal year, including the Pentagon, Veterans Affairs and the Health and Human Services Dept. In total, approximately 2.1 million people work for the federal government; which estimates that around 47 percent of them will be sent home without pay. They include employees of the Small Business Administration, the Peace Corps, the National Archives, the National Aeronautics and Space Administration and the General Services Administration.