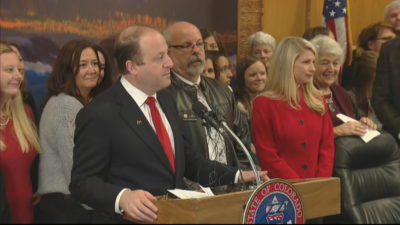 The bill, sponsored by Colorado State Rep. Tom Sullivan (Democrat) of Aurora, who lost his son in the Aurora Theater shooting, allows a family or household member to seek an ERPO, to remove firearms from a family member in the midst of a mental health crisis. The guns are then turned over to law enforcement, and stored with law enforcement or with a federally licensed gun dealer. The criteria for such an action: “individuals found to pose a significant risk of harm to him or herself, or to other people.”

A court hearing would be held within 14 days to determine whether to extend the seizure depending upon the risk situation and could be extended for up to 364 days.

Sullivan’s comments upon the signing of the Red Flag Bill reminded the audience that “no one should have to stand and see their child’s body lowered into the earth.”

Another of the bill’s supporters, Douglas County Sheriff Tony Spurlock, lost one of his deputies, Zackari Parrish, when he was shot and killed in the line of duty in 2017. The bill is named after Parrish.

“It could have been averted with the ability [the Red Flag Bill] gives law enforcement,” said Spurlock.

The Colorado House approved the bill in a 43-20 vote earlier this month. The Colorado Senate voted 38-25 to approve the bill, which included some significant amendments, some of them possibly influenced by letters from Chaffee and Pueblo counties, outlining multiple areas of concern.

Among those concerns amended into the final bill were changed regarding search warrants, a process for withdrawing a petition, and even the definition of possession of a firearm. Language in the bill was strengthened to encourage a judge to order a mental health evaluation, a training board, model procedures and standards for how peace officers handle requests. Also added was language that mirrored the concern in the letter from Chaffee County Commissioners and Sheriff, on how to expunge these incidents from a record. Language was also added relieving counties from liability for acts and omissions and language was added about malicious intent.

The legislation does not take effect until January 2020. Rocky Mountain Gun Owners, a pro-Second Amendment lobbying group, has already announced that it will pursue recalls over lawmakers involved.

Recalls might seem extreme when you consider that the lawmakers likely to be targeted were duly elected by a majority of the voters in their districts. These days recalls don’t seem to be based on the historical reasons for recall. That is, based on allegations of criminal wrongdoing. Instead, recalls appear to be launched by disgruntled members of the (generally losing) political party, ceasing upon and targeting issues that are used to stir up continuing dissatisfaction with government at all levels. Often they aim at those officials at state or local levels where they actually know the people they are aiming at recalling. Their efforts are often intimidating and silencing to those who disagree with their recall focus, however, small their reasons for pursuing recall. It’s been eight years since Johnstown, Colorado, Mayor Mark Romanowski survived a recall election prompted by residents’ opposition to a plan to switch from diagonal to parallel parking spaces.

Recalls can be expensive, often costing taxpayers $400,000 or more between the recall and the new election that results from a recall. But the damage can go much deeper: splitting communities apart, forcing families and neighborhoods to take sides, and destroying a community’s ability to listen and allow all its residents to have a voice.