The Decker Fire parameters are now 8,705 acres, being fought by a Type 1 Incident Command of 889 personnel. The fire remains only 30 percent contained. 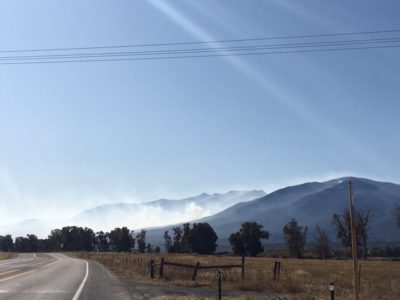 The view of the Decker Fire from U.S. 291 northwest of Salida. Depending upon the direction of the wind, smoke is often visible as far north in the county as Buena Vista. (Courtesy photo)

Yesterday’s colder temperatures and moisture helped limit fire behavior, but Saturday activity has increased. On the south side of the fire, (Divisions A and X) yesterday, the large area of the active fire near Simmons Peak continued its slow move southward but was kept in check by southwesterly winds. The fire is slowly backing its way southward, but still within the indirect line established farther to the south.

On the east in Division T, where firefighters have been battling two “finger areas” since the fire jumped Rainbow Trail last Sunday, they finished securing the “Rock Finger” area of the fire near Bear Creek on Friday. They made progress in efforts to put a fire line around the nearby “Columbine Thumb” on Friday to firm up the line down the east edge of the fire on Saturday.

Chipping operations on the northeast (Divisions W and Y) focused on building a new primary control and contingency line between the wilderness boundary and Howard. It is expected that it will take another two to three days to complete that work.

The spot fire on the southeast corner of the fire was monitored all day Friday and Saturday but showed minimal activity. It is in a high remote area and surrounded by rock on three sides. Firefighters will be assessing the area for possible future contingency line locations that would protect values at risk west and south of Howard.

Containment operations near the Bear Creek drainage area and fire spotting may increase smoke output in the afternoon and evening hours. The westerly winds will continue to move smoke eastward into Fremont County and impact communities along the Arkansas River, including Wellsville, Howard, Coaldale and Cotopaxi.

Structure protection crews remain in the Bear Creek neighborhood to make sure all equipment is ready if needed. Night Operations teams are continuing to monitor the fire as they hold and secure the fire line.

Interactive map for the Decker Fire:www.tinyurl.com/deckermap