Alan Simpson wrote the law that gave amnesty to 2.7 million. He wishes today’s immigration reformers would repair IRCA’s flaws before repeating its mistakes.

Thirty-five years have passed since [Wyoming Senator] Alan Simpson celebrated the enactment of the Immigration Reform and Control Act (IRCA) in the White House on November 6, 1986. But the three-term senator from Wyoming still meets strangers who insist on thanking him for co-sponsoring IRCA, which enabled about 2.7 million unauthorized immigrants to become legal residents and citizens. 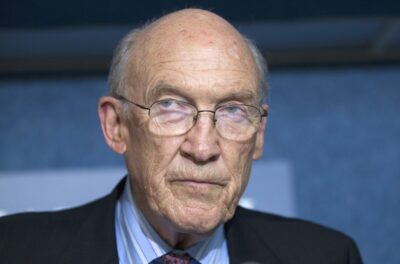 “I just met someone the other day,” Simpson told me when we spoke earlier this year. “He said, ‘Do you know that I’m the grandson of a person who was legalized under IRCA?’” Meeting people like that has been, “my solace, my pleasure, and my joy,” since leaving office in 1997, Simpson said.

Yet, Simpson agrees with the many analysts of U.S. immigration policy who say that IRCA led to more unauthorized immigration and deepened the political divide over immigration because its promise to create a robust system for verifying the immigration status of workers was never fulfilled.

“IRCA required funding for agents to investigate workplace violations and prosecute employers who broke the law,” by knowingly hiring unauthorized immigrants, said Simpson. “But administrations and legislators of both stripes have been loath to disrupt the labor supply for farms and other businesses, which would be the natural consequence of strong workplace enforcement.”

When IRCA was being debated, Simpson and his House co-sponsor, Kentucky Democrat Romano Mazzoli, wanted to include what they called a “more secure identifier” than green cards and other documents they believed could be easily counterfeited. For this idea, “the right and the left pounded the crap out of us,” Simpson recalled. “They called it a ‘national ID card’ [and] the beginning of a slippery slope toward state control [and] tattoos,” like the Nazis printed on the arms of Jews.

Simpson and his allies managed to insert text calling for federal agencies to study how to create tamper-proof documents. While Simpson says the compromise was necessary to pass the bill, he knew that “employers would just accept fake green cards.”

And that is what happened. “Effective enforcement [of IRCA] … was compromised by the emergence of a growth industry in fraudulent documents almost immediately,” according to the Migration Policy Institute.

With demand for their labor undiminished by IRCA, unauthorized immigrants came — or overstayed their visas — in greater numbers, increasing from an estimated 3.5 million in 1990 to 11 million today. IRCA also hardened conservative opposition to any form of amnesty, including DACA. “[Any amnesty tells] poor and suffering people from around the world [that] if you can get here by hook or by crook — sooner or later we will give you legal status,” wrote Peter Nunez, chairman of the Center for Immigration Studies.

Federal immigration agencies have periodically sought to enforce IRCA’s employment eligibility provisions by auditing paperwork at farms or raiding meatpacking plants. Presidents from George H.W. Bush to Joe Biden have cycled through a range of priorities and strategies for such enforcement. The most recent example: DHS Secretary Alejandro Mayorkas’ announced in October that worksite enforcement would “focus on unscrupulous employers who exploit the vulnerability of undocumented workers.”

As part of this policy, Mayorkas ordered immigration agencies to ensure that the federal E-Verify system is “not manipulated to suppress unauthorized workers … or punish [them for] reporting unlawful labor practices.”

Given that some seven million unauthorized immigrants currently work in the U.S. — many doing essential jobs in food production, health care, and other industries — Mayorkas’ policy is understandable from a humanitarian and an economic perspective. But E-Verify, which is required to some extent by federal contracting agencies and more than 20 states, is plagued with broader problems that go to the heart of Simpson’s concerns from 35 years ago.

For one thing, the system is easy to cheat with false identities, as shown in this March 2021 report by the Fort Worth Star-Telegram. On the other hand, it has an unfortunate tendency to flag legal residents as unauthorized, according to the libertarian Cato Institute and the ACLU.

The weaknesses in E-Verify are widely known in Washington, where Democrats and Republicans have sometimes attempted to make it more rigorous. In 2013, Senators Rob Portman (R-Ohio) and Jon Tester (D-Montana) co-sponsored an unsuccessful amendment to an immigration reform bill that would have created a better photo-matching process.

Despite — or perhaps because of — its flaws and weaknesses, E-Verify is used by politicians on the left and right who want to “look tough on illegal immigration” without negatively impacting “their local businesses and economies,” wrote Cato’s Alex Nowrasteh in an October 2019 Politico column.

Even Trump backed away from E-Verify

Even former President Donald Trump failed to wield the E-Verify sword — despite campaign promises to do so. “While Trump … maintained his passionate commitment to build the wall, his ardor for E-Verify … cooled,” during his term, wrote veteran immigration reporter Jerry Kammer in his 2020 book about IRCA, Losing Control: How a Left-Right Coalition Blocked Immigration Reform and Provoked the Backlash that Elected Trump.

“If Trump had delivered on that election-year promise, he would have taken a historic step toward repairing the fatal flaw of the Immigration Reform and Control Act,” wrote Kammer. “A virtual wall around the American workplace would be far more effective in stopping illegal immigration than a [border] wall [that] is little more than an inconvenience for professional smugglers.”

As of this writing, Democrats seek to include a dialed-down version of IRCA-style legalization in the budget reconciliation package. Whether or not that succeeds, they should consider working with Republicans to come to grips with the civil liberties and fraud issues inherent in E-Verify. A good place to start would be the recent report on E-Verify’s deficiencies from the Department of Homeland Security’s Office of Inspector General.

Bipartisan collaboration on immigration may seem like a quaint notion in this highly polarized era. But it’s important to understand that IRCA passed at a time of high political tension over immigration. Liberals denounced it as racist. House Republicans nearly stripped its legalization provision, according to Kammer’s history.

At the signing ceremony, Simpson felt “proud as hell,” he wrote in his 1997 book, Right in the Old Gazoo: A Lifetime of Scrapping With the Press. “I had crisscrossed this great country making the case for immigration reform for six years. … Some had painted me as a bigot, a devil, pure evil. And yet I had gotten the thing done. Rarely have I been so satisfied.”

Thirty-five years later, he is still proud of IRCA’s amnesty, which ended the threat of deportation for 2.7 million people. Yet he also deeply laments the failure of Congress and the executive branch to make good on IRCA’s promise of verifying the immigration status of workers. IRCA, he says, became “a toothless monster.” And he is convinced that bipartisan compromise is the only way to fix its flaws and move the country forward on immigration.

Such a compromise would hinge on a trade-off of legalization — or amnesty — for millions of unauthorized immigrants with robust worksite enforcement, the basic framework of IRCA and of the 2007 and 2013 unsuccessful bipartisan drives for immigration reform.

The prospects for such compromise seem more distant than they were in 1986. “The Democrats have come under the sway of their open-borders left while Republicans have moved toward strident opposition to any amnesty,” Kammer told me in an email exchange.

Editor’s Note: According to the author, he “was driven to research and write this piece by one question: what will it take to enact another IRCA-style amnesty for unauthorized immigrants.”