Sometimes you have to set your sights on a target that’s seemingly out of reach and pour your energy into accomplishing it.

Several years ago, the team at Colorado Mountain College established a goal to become Colorado’s next Hispanic Serving Institution (HSI), the federal designation assigned to colleges and universities that successfully support a student population that is 25 percent or more Latino. Based on CMC’s history, it was a seemingly overconfident objective. But, by putting the right strategies in place, we knew it could be achieved.

There are just over 500 Hispanic Serving Institutions in the United States (about 10 percent of roughly 5,000 colleges and universities nationwide). These colleges are found in 21 states as well as Puerto Rico and the District of Columbia and are most often concentrated in states with large Latino populations, such as California and Texas, and in metropolitan areas. In Colorado, only about one-third of the state’s public colleges have been granted HSI status. CMC will be the first HSI located in Colorado’s rural, high-cost mountain resort region.

When I arrived at CMC in 2013, the college was launching into its newly-authorized bachelor’s degree offerings. Then, CMC’s Latino population was approximately 13 percent of overall enrollments, which was not representative of the general population. Troublingly, at that time, CMC’s Latino students were underperforming with regard to retention and completion compared to their majority counterparts. In fact, Latino student achievement lagged by double-digits. 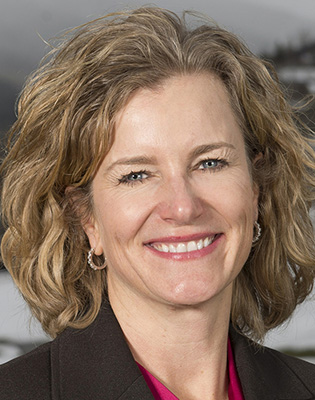 President and CEO of Colorado Mountain College Dr. Carrie Besnette Hauser , was elected to the Board of Directors of the American Council on Education, the major coordinating body for the nation’s colleges and universities. Photo David Clifford

We promptly adopted performance objectives for each of our eleven campuses and the college as a whole. In every category – enrollment, retention, credit accumulation, and course completion – we focused on disparities between Latino and non-Latino students.

By 2020, the improvements at CMC were dramatic and positive. On nearly every metric, Latino student performance not only improved but stubborn gaps in retention and completion finally closed. In fact, Latino students had the highest completion performance among all groups in 2019-20. Noteworthy, these improvements did not come at the expense of anyone else. Over the past five years, equity disparities have dissolved and ALL students at CMC have become more successful. A true win-win.

Though we cannot isolate any one strategy as a “panacea,” several initiatives were important.

First, the college “doubled-down” on its commitment to offering concurrent enrollment classes in area high schools. We knew the populations in many local school districts were 50 percent or more Latino. So, instead of waiting for these students to come to CMC following high school, we made the college more accessible to them at an earlier age. Today more than 2,000 local high school students enroll at CMC annually. Along with their high school diploma, many also earn post-secondary certificates or associate degrees – free from any tuition costs to them or their families.

Second, we applied millions of dollars of state and philanthropic grant funds as well as newly designed financial aid programs where they were most needed. The college also directed hundreds of thousands of dollars to local school districts to cover the costs of tuition and books for high school students, and through our President’s Scholarship, guaranteed funding to every graduating senior across CMC’s region.

Finally, we intentionally added new career-focused certificate and degree programs, concentrating our energy on programs leading to stable employment in our regions, such as nursing, teacher education, law enforcement, and business. And, our evolution into a “dual mission” institution – one that offers bachelor’s degrees in addition to locally relevant certificates and associate degrees – gave students seamless pathways to continue their education close to home while contributing to the local economy.

These efforts were not designed to increase enrollment, revenues, or “grow” the college per se. Instead, we focused on improving outcomes and becoming a highly effective institution where students complete their program of choice without incurring burdensome debt.

And, it worked. Today, our student enrollment is modestly lower than it was in 2013 but we’ve doubled the number of degrees and certificates awarded annually. More of our students – now approaching 28 percent Latino – enroll full time and finish what they started.

CMC’s newly minted HSI status marks the end of the beginning, not an end to itself. Considerable effort still lies ahead including pursuing federal grants for which we are now eligible – resources that will improve the CMC experience for everyone.

And, without question, this new designation is a testament to the fact that great things happen when thousands of talented people apply their energy toward a shared goal – to level the playing field so that anyone who attends CMC is welcomed, supported, and successful.