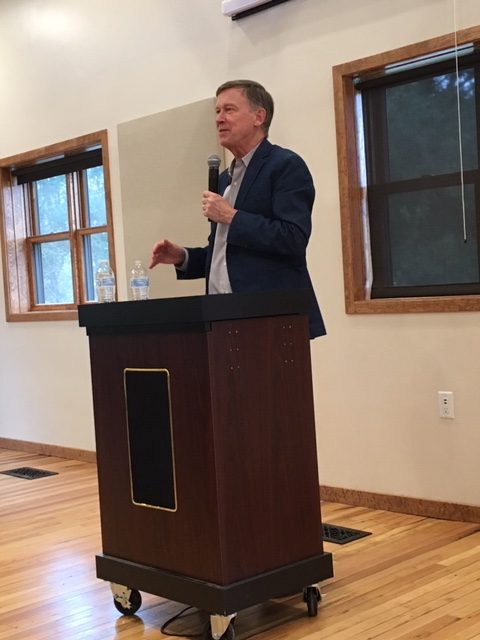 Newly sworn-in Senator John Hickenlooper has joined a chorus of legislative voices, including fellow-Senator from Colorado Michael Bennet in calling for the removal of President Donald Trump following the disgraceful events of Jan. 6 in which a Trump-incited mob stormed and overtook the United States Capitol. 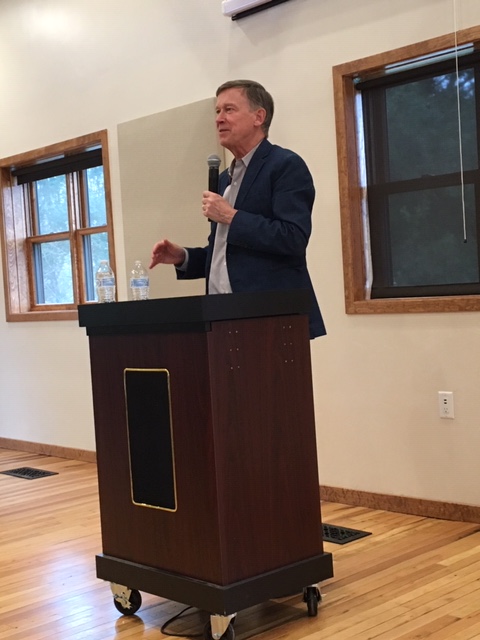 Now Senator John Hickenlooper speaks on a visit to Salida in 2018. Photo by Jan Wondra.

“Trump and the thugs who attempted a violent coup can’t override the will of the people,” said Hickenlooper in an Op-ed published in The Colorado Sun.

“On Sunday, I was sworn in to represent Colorado in the United State Senate. Four days later, I was hunkering in a secure location in the U.S. Capitol’s basement, texting my wife, Robin, that I was OK and to make sure she was safe.”

“President Trump is clearly unfit for office. I supported impeachment a year ago, and the American people voted to remove him in November. That’s finally happening on Jan. 20, when President-elect Joe Biden will take over and begin to rebuild our nation. President Trump and the thugs who attempted a violent coup can’t override the will of the people.”

“Last night we certified the Electoral College results. President Trump is on his way out, but over the next 13 days I’d support any option that could remove him from power faster and take away the media spotlight he so desperately craves.”

When he made these initial remarks to The Colorado Sun on Thursday, it had only been 24 hours since the events that shocked the world, as thousands of Trump supporters attempted to usurp the will of the American people and disrupt Congress’ acceptance of the results of  the 2020 election.

“This is a president who has spent the past four years stoking dangerous divisions and appealing to the most vile, most toxic elements of human nature. As Nelson Mandela famously said, ‘No one is born hating another person. …  People must learn to hate.’ And President Trump has been a masterful teacher.

As with so many things over the painful past year, Wednesday’s events crystallized what’s most important in our lives. I held Robin a little tighter last night. I called my son Teddy and told him I loved him.

I suspect many Americans reacted similarly. Most people, whether they live in Denver or Cortez, San Francisco, California or Winston County, Alabama, share a remarkably similar set of hopes and dreams. They want to work hard in a job that will pay them a decent wage and help them meet their monthly bills. They want access to affordable health care in case they or a loved one gets sick.

They want an end to this pandemic and for their kids to have a better life than they did. They want to live in a community that is safe, and where the color of their skin doesn’t determine their treatment at the hands of law enforcement.

The rioters who assaulted the symbolic heart of our nation’s government Wednesday are not reflective of our country’s spirit and potential. But they are a frightening harbinger of what could come if we don’t fix our deep-rooted problems — especially if some of our elected officials continue to insist on putting party ahead of country.

Without the benefit of hindsight, we don’t know whether Wednesday’s events will be the bookend to a sad and tragic chapter in American history or simply the beginning of a much larger section.

That direction is our collective responsibility. We are the guardians of this fragile democracy and its endurance rests on our shoulders.”

U.S. Senator from Colorado and a former Colorado governor and Denver mayor