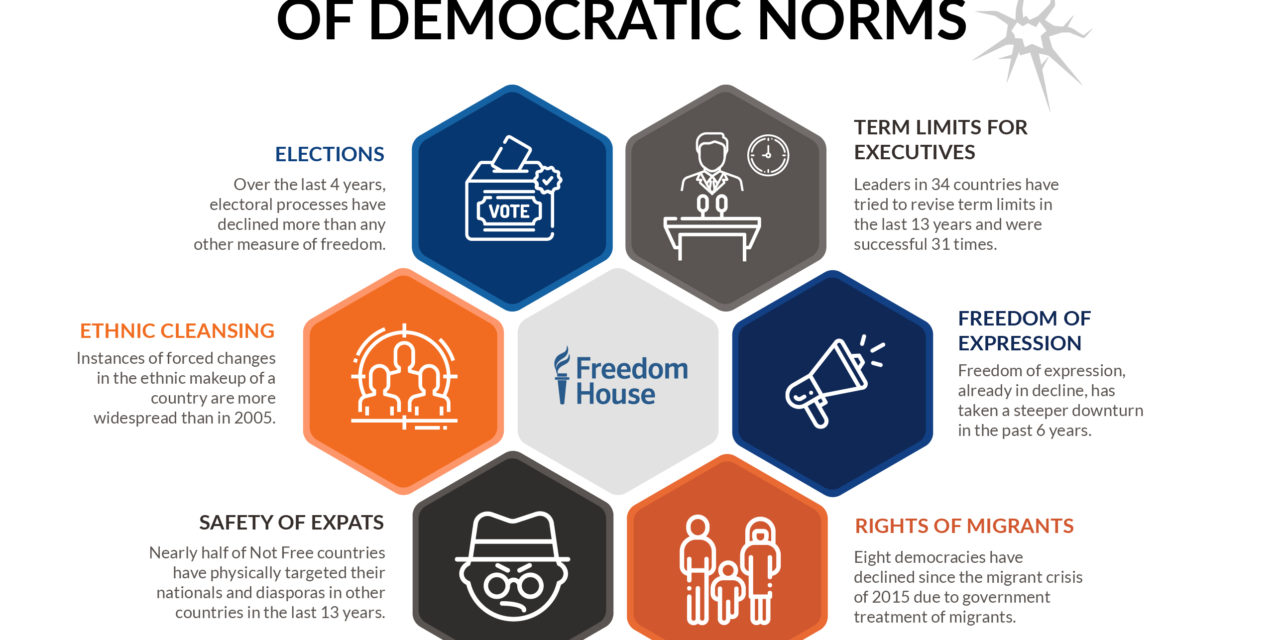 When the presidency is turned against the voting system itself, a bitterly fought election becomes an enterprise threatening event. From emergency to active threat: We have again switched settings in our coverage of Donald Trump.

On March 19 of this year, we alerted readers to a shift in our coverage of Donald Trump’s presidency. We said then that we were moving to an “emergency” setting, which had these consequences for how we would treat Trump as a figure in the news:

If, as a member of the Democratic Party, some future president resorts to similar methods, we will take similar measures in response. For the principle on which we are acting is not reflexive opposition to Donald Trump or some standing hostility to the Republican Party, but loyalty to democratic institutions, including the surpassing importance of free and fair elections.

When the powers of the Federal government are turned against the reliability of the vote itself, we have crossed an invisible boundary that separates a bitterly fought election from an enterprise-threatening event.

We know this sounds extreme. We wish it were not happening. We understand the risk we take by putting it so starkly: The presidency of Donald Trump is an active threat to American democracy. What do we mean by an active threat? Using the powers he won by election, the incumbent is trying to destroy public confidence in the results of the next election.

For example: “A Wall Street Journal review of Mr. Trump’s tweets dating back to 2012 found more than 110 instances of the president claiming widespread illegal voting, asserting an election or primary was rigged, or that voting by mail would allow for rampant fraud. More than half of those tweets were from this year, with most of them concerning mail balloting.”

Upon this “repetitive and misleading campaign against the expanded use of mail-in ballots,” Trump has constructed a new threat: his sabotaging of the Post Office, which is more necessary than ever to this year’s election because of the coronavirus pandemic. Here is how factcheck.org put it:

In an Aug. 13 interview, Trump admitted that he opposes a coronavirus pandemic relief bill crafted by the House Democrats because it includes funding the U.S. Postal Service and state election officials — funding that Trump said is needed to allow the Postal Service to handle an expected surge in mail-in voting.
What do we mean by an active threat? Look again at what is happening:

1. Using the public platform of the presidency, Donald Trump is trying to persuade Americans that their elections cannot be trusted while standing for election as a candidate himself.

2. Using the formal powers of the presidency, he is trying to make this reckless claim come true by preventing the Post Office from performing reliably as the country turns to mail-in voting.

3. And he is doing this during an election in which a reliable mail service is an imperative because of a public health crisis that his presidency has failed to contain.

Put 1, 2, and 3 together — examine the way they loop into one another — and it’s more than a civic emergency; it’s a national crisis. News coverage has to reflect that. We can’t just cover these events in bigger type. We have to take commensurate action.

And so we are announcing today these additional measures, beyond the “emergency” setting to which we shifted in March.

Almost all the resources we would have used to cover the party conventions will be redirected to a threat modeling team. This team will be responsible for locating the most likely breakdowns in the election system, and for advising the assignment desk on what deserves the most attention in our daily report. Everyone in the newsroom will know what our top priorities are in covering the campaign: the biggest threats. There will be no excuse for getting distracted by his tweets.

One of the products of that new team will be a “live” Threat Urgency Index, re-published daily at our site, and in a newsletter you can subscribe to. It will summarize and rank the biggest dangers to a free and fair election by merging assessments of how consequential, how likely, and how immediate each threat is. Right now, for example, the crippling of the postal service would be expected to rank highly on that list. But we don’t know what others will emerge between now and January 20.

One purpose of that index is to provide a counterweight to the confusing onslaught of America-in-crisis headlines, each of which feels like a “big story.” (Usually because it is.) This has been called “flood the zone with shit” by Trump confidant Steve Bannon. It shrinks the importance of any single warning signal by jamming the system with too much signal. When outrageous conduct produces no outrage because people have given up on trying to process it all, the zone flooders have “won.”

The Threat Urgency Index will try to combat this method by adding hierarchy, continuity, composure, clarity. Voters and news consumers will be able to hold us accountable for our coverage of what we publicly declare to be the biggest threats to a free and fair election.

As President Trump becomes a more active danger to American democracy, the rest of the political system has to decide what to do about it. This is one of the levers that journalists have. They are in a position to pressure office-holders and other government officials to go on the record with reactions to what Trump is doing. Pressing for answers can itself can have effects, as we saw last week in Montana.

In a normal campaign year, we assign people to “embed” with the candidates and follow them around as they hit the campaign trail. This time there is no campaign trail because of COVID-19. So we are shifting those resources to a different project: getting key office holders in both parties on the record through relentless questioning designed to hold them accountable for supporting, opposing, or interrogating what Trump is doing to undermine the vote.

In a normal election cycle, we put considerable effort into tracking “the race.” We do this in the belief that people want to know who’s winning and how they’re doing it. But we’re confident we can keep you informed with a simple daily summary of polling averages in key states and nationally. (Sites like 538.com and Real Clear Politics specialize in this kind of information.)

With a deadly pandemic that has not been brought under control, a collapsing economy that is leaving families adrift, and a threat to its democratic institutions coming from the top, the United States is badly in need of people with political courage and practical vision who can inspire others.

And so the resources we would normally devote to state-of-the-race journalism will be redirected: to reporting about people who are providing exceptional leadership, or devising solutions, like the team from the Yale and the NBA who this week came up with a coronavirus test that the FDA called “groundbreaking” in its efficiency.

We are well aware of the smirking contempt in which “positive” news is held by the most hard-boiled journalists. But anyone who has listened carefully to readers, viewers and listeners knows that news fatigue and a sense of hopelessness are now serious obstacles to the maintenance of an informed public.

If the United States is to emerge from this crisis with its democracy intact, we are going to need an alert and engaged citizenry. It is unrealistic to expect people to pay attention to an unending stream of crisis news, especially in a nation deliberately polarized by a president sowing chaos, selling hate. There has to be another key in which the country’s song can be played. Instead of who’s ahead in the horse race, we will be reporting on who’s ahead in the human race to get us out of this mess. We feel this is part of a rounded approach to crisis reporting.

Finally, if you want to contribute to our project of combating an active threat with careful journalism, you can become a member of our Red Alert team. You sign up, get verified (real names and addresses only) and then pick among different ways to get involved.

Our first crowdsourcing project will ask Red Alert members to help us test wait times for mail delivery in different parts of the country. Other projects will track the spread of misinformation through Facebook ads and messaging apps. You can sign up to monitor local TV news for us. Know someone we should be reporting on? (Someone who’s ahead in the human race to get us out of this mess?) Red Alert members can suggest stories, and help us diversify our reporting.

So here again are the steps we will be taking:

In our March note to readers, we said: “Even this far into his term, it is still a bit of a shock to be reminded that the single most potent force for misinforming the American public is the current president of the United States.”

A few days ago, Stephen Collinson of CNN wrote this: “The most dangerous threat to the integrity of November’s election is coming from the man sworn to protect it, the President of the United States.”

That is an escalation. Trump is an active threat. This has consequences for our journalism. How can it not?

Editor’s note: Rosen says “I am not a news organization, just a lone writer, and a journalism professor who is also a press critic. Since 2015, I have written a lot about the problem of covering Donald Trump. This post is an extension of that work. It is written in the voice of an editor’s note “announcing” a new policy…. I am not a news executive within a company of journalists, and I don’t want to give the impression that a news organization has made this kind of shift. That has yet to happen. So consider this my statement of what editors in the national media could and should be doing right now. Call it press criticism in a different key.”