As covered in Part One of Guns and the Gun debate, the relevant and practical use of guns has evolved into two main areas of application: hunting/sports purposes and protection. Protection can be further broken down, as deduced from the Second Amendment, as personal protection and necessary for protecting a “free state.” Personal protection is an obvious right of all citizens, and firearms are a definite way to ensure that protection. However, modern interpretations and laws have delineated how the practical application of protection by firearm is lawful.

Most states have self-defense laws that lawfully allow a person to use deadly force only when they believe a lesser degree of force would be inadequate and when they or another person is in fear of imminent danger of death or serious bodily injury. Some states such as Florida, go even further with “stand your ground” or “make my day” laws. The website www.findlaw.com summarizes Colorado’s “make my day law,” as:

“…legislation which grants the right of homeowners to shoot and kill intruders. If there’s reason to believe that they’re threatened with serious injury or death, the homeowner’s action is lawful. The scope of the immunity is limited; the intruder must be inside the home or “dwelling”-meaning front porches and backyards don’t count.”

Given these legal parameters, personal protection is primarily dominated by handguns. There are numerous reasons for the appeal of handguns for self-defense but most important is their size, ease of use and ammunition. Their compact size allows the user to store or conceal the gun for quick access safely. Handguns can be easier to use with less emphasis on accuracy in confined areas. Handguns also use less powerful ammunition compared to rifles which minimize over-penetration after striking a person or object. 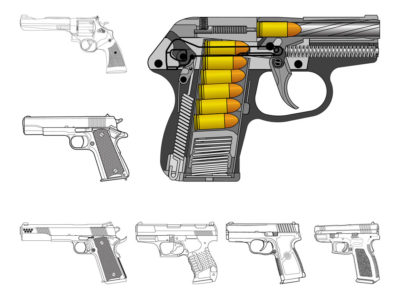 With a handgun, if there is an unfortunate miss when shooting, the bullet travels a fraction of the distance a rifle bullet does thus, lessening the likelihood of injuring an innocent party. Shotguns are also appealing in personal protection for many of the same reasons, but their larger size and weight makes them less prevalent.

Use of guns for the protection of a “free state” was undoubtedly influenced, at least in part, by the king’s use of the British Army to impose his rules before the American Revolution. This was a time when, other than cannons, the availability and differences between military firearms and civilian firearms was negligible. In that era, armed citizens and “well regulated” militias could legitimately check the power of an occupying army.

Weapon technology has grown by leaps and bounds since the Revolutionary War, outpacing the citizen’s safe and practical need for similar technology. Congress attempted to mitigate this widening gap of military and civilian firearm technology with the passage of the Posse Comitatus Act in 1878. The website www.encyclopedia.com explains the circumstances surrounding its passage and cites it as updated in 1956. “Whoever, except in cases and under circumstances expressly authorized by the Constitution or Act of Congress, willfully uses any part of the Army or the Air Force as a posse comitatus or otherwise to execute the laws shall be fined under this title or imprisoned not more than two years, or both.”

Regardless of whether or not the circumstances were ever to come to pass, given today’s military weaponry, the well-regulated militias and armed citizens would need tanks, helicopter gunships, and strike fighters to stand a chance.

Guns have also been used to stand up to federal, state and local law enforcement to protect what some have called the “free state.” Ironically, in these cases, law enforcement has only in recent times started to regularly carry military-style weapons in response to incidents where criminals outgunned them. The New York Times highlighted this trend in a 2007 article, Miami police given choice of carrying assault rifles. According to the article, one of the earliest and most high profile cases occurred in North Hollywood, Calif.

“Officers in Los Angeles have been equipped with the weapons since a 1997 gunfight outside a bank where police officers were out-gunned by a man armed with an AK-47. Officers in that situation had to go to a nearby gun store to get high-velocity weapons.”

In subsequent years The New York Times article looked at several other large police departments whose officers were injured or killed in similar situations after being outgunned.

While protection is a more complicated area of gun focus, it highlights the importance of including guns in the debate. Fear of the unknown is a natural human phobia. Avoiding modern realistic and relevant practical dilemmas between civilian and military weapons deprives unaware people of valuable information and understanding.

To read earlier articles on Guns and the Gun Debate: