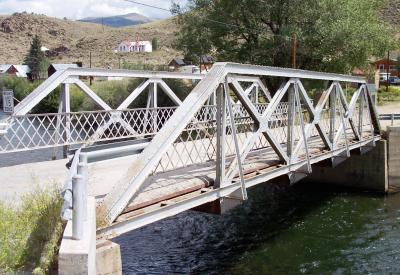 It’s been months if not years in discussions and planning, but Chaffee County’s historic Granite Bridge will finally be restored beginning in spring, 2023. As could be expected with any supercentenarian structure, the Granite Bridge is due for some substantial rehabilitation to maintain its service life for the next century.

This bridge has supported countless trips by foot, hoof, and wheel over the Arkansas River throughout its almost 112 year history. It was originally installed across the Arkansas River in 1911. It is one of the few remaining examples of what is known as “steel pony truss” construction still in operation, as well as the first of its design type in Colorado.

The bridge is located north of milepost 194 along U.S. Highway 24 at Chaffee County Road 397. It has numerous structural and design issues including; substandard guardrails, single-lane construction, corrosion on several trusses, as well as on steel deck members, and deteriorated abutments.

Chaffee County has been planning the ~$3.1 million dollar Granite Bridge rehabilitation project for several years in collaboration with Colorado Department of Transportation (CDOT) and OTAK Engineering, who is advising on the engineering and design specifications.

The combined grant funding of $1.36 million comes from what is known as the Special Highway Committee (a cooperative effort between Colorado Counties Inc., the Colorado Municipal League, and CDOT that awards federal grant funding to county and municipal off-system bridges). Another $1.2 million coming from the Federal Highway Administration will cover the majority of the project cost. The county will provide the balance of the expense from its capital improvement funds.

The rehabilitation efforts will maintain the historical appearance of the bridge while upgrading it to modern engineering and safety standards, along with providing substantial river bank stabilization underneath. The project plan will be coordinated to minimize disruptions to the Granite community and recreational boaters in the area. Residents of and visitors to the town of Granite will be notified well in advance of any impacts that can be anticipated while the bridge work is underway.

The county plans to issue a Request for Proposal (RFP) by early February to solicit contractors to perform the Granite Bridge rehabilitation work. The project is expected to commence in the spring and conclude by the end of 2023.

Featured image: The historic 1911 Granite Bridge spanning the Arkansas River at the town of Granite in Chaffee County, Colorado. Photo by James Baughn.