Local business owner of the Boathouse Cantina and Manhattan Hotel Ray Kitson appeared before the Salida City Council on Tuesday evening to appeal a Dec. 26 decision by the Historic Preservation Committee that denied a Certificate of Approval for a shade structure at the Boathouse Cantina, located at  228 North F St. that had already been built. At the end of the contentious proceedings, two split decisions by City Council reversed the decision of the HPC to retroactively approve the structure, with Mayor P.T. Wood breaking the tie votes. 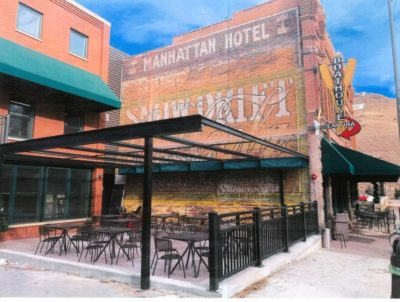 The awning in question in front of the Ghost Sign at the Manhattan Hotel (Photo Courtesy of Salida City Council Packet Jan. 21)

In compliance with section 16-2-70 of the Salida Municipal Code, that HPC decision can be appealed to the Salida City Council.  Kitson was contesting the HPC decision that the new shade structure and retractable awning detracts from the historic integrity of the primary structure. Specifically, that the structure would cover portions of the historic ‘ghost sign’ visible on the building.

Salida City Planner Kristi Jefferson presented an overview of the timeline of events before the appeal came to the Council.

According to the timeline, Staff notified Mr. Kitson on November 18, 2019 that the shade structure (which had already been constructed) required a Major Certificate of Approval (CA) from the HPC.

The application for the CA was submitted on November 22, 2019 by Patrick Payne, Operations Manager of the Boathouse Cantina on behalf of Kitson. On December 26, 2019, the application was considered by the HPC and denied based on the following findings:

Kitson spoke before the public hearing process, “I agree with staff’s findings that we are in compliance with all of the standards. I think the HPC worked out of its purview, as the City Attorney [said], you can’t deviate from the regulations. There are no provisions at all in the code to protect a ghost sign.”

“We have not really obscured it at all. There is nothing that is absolutely up against the mural. You can see the entire mural. There is only really eight bolts anchoring it, per code,” said Kitson. He added, “I did build it before I had an application and once I figured out that was the case, I went and got an application and filled out all the necessary paperwork.”

He went on to say “The only reason that this really happened is when we went to put in all of our awning permits, the fella who has done 90 percent of the awnings in this town, Aztec Manufacturing out of Pueblo, he had felt like it wasn’t an awning, that it was only a shade structure.”

During the public hearing concerned citizen Tom Golson said, “As far as the front of the Manhattan Hotel, I think Ray should be commended for making sure the windows look okay and that the brick is the right color. However, I think that the City Council went through a lot of maturation to make sure that they had highly qualified professionals on the [HPC]. You gave [the HPC] authority [to make] decisions according to the Department of Interior’s rules.” 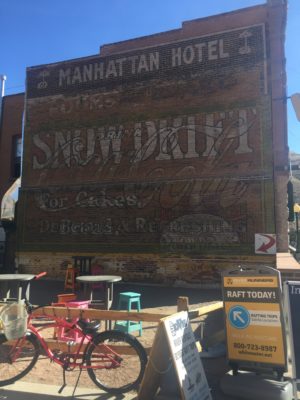 “My only rebuttal to the gentleman who spoke is that his major point is that I’m encumbering the mural,” said Kitson.  “I could paint over that mural tomorrow and there’s nothing in the regulations to protect it. I wouldn’t do something like that, but the fact of the matter is that there are no provisions in the current guidelines that protects ghost signs.”

Kitson continued, “The other thing I would say. You know when you talk about whether you want the building in the historic district or if you want it out; the best way that you can protect our historic buildings in town is to put a successful business in them and I’ve had a successful business there for decades. I’ve done nothing but improve that area and will do nothing but to improve that area in the future.”

Following the public hearing, the Salida City Council began deliberations. Council member Jane Templeton started the questions by asking if Staff had referenced areas of the Salida Municipal Code that referred to painted walls, particularly in Section 16-1-80 which talks about exterior architectural features.

Planner Kristi Jefferson provided, “We have a lot of different murals. We do have ghost signs, but it’s not a protected thing. So if Mr. Kitson wanted to go and paint over his ghost sign, because it’s previously painted brick, you can paint it. If it’s raw brick, you cannot paint your historic building.”

Assistant City Attorney Nina Williams answered Templeton by citing the language of the code that defines exteriors, “…defined as the architectural feature means the architectural style and general arrangement of the exterior of a structure, including the type and texture of the building materials, and that includes all windows, doors, lights, painted wall signs or displays, and other fixtures. So, I don’t think that we defined painted wall sign in our code.”

Community Development Director Glen Van Nimwegen added, “So much of the Historic Ordinance refers to the Secretary of Interior standards and then we have [our local] design guidelines. Which that kind of interprets how Staff should be interpreting that code and there’s nothing in [those] that say we must protect ghost signs.”

This response prompted Councilman Justin Critelli to ask what the difference is between a ‘painted wall sign’ and a ‘ghost sign.’ City Administrator Drew Nelson replied to Critelli saying there is not a definition in the code for either term.

Councilman Dan Shore asked a question, “When you look at the rationale that [the HPC] used for turning it down, number one says that the applicant didn’t follow the process. I was wondering if that is even in the HPC’s purview?”

Williams replied, “No that part is not. It is frustrating when the commission is in a situation where the applicant has already done something that is being applied for, however, any commission, whether that be a Planning Commission or the Historic Preservation, must look at it like a new application. And would they have approved it or not have approved it, if the structure wasn’t constructed.” 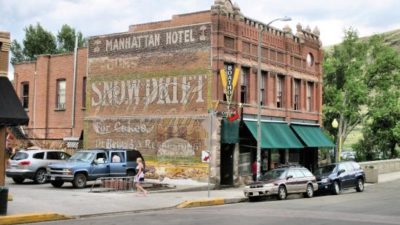 Williams presented three options to Salida City Council at the beginning of the meeting. Council could either reverse the HPC’s decision, confirm the decision made by the HPC, or to modify the decision with any additional amendments.

Councilman Pollock asked what the next steps would be, given the three options Council had available. Williams said that if the decision from Council was to confirm the decision by the HPC, then the appellant (Kitson) would then have the opportunity to file a Colorado Rule of Civil Procedure (“C.R.C.P.”) 106(a)(4) “106 action” with the District Court or reapply for a different application.

During council deliberations Critelli said, “It was not that long ago that Council reinstated voting powers to the HPC. I think one of my main reasons for supporting that vote was ultimately to make it a more professional body and more appealing.”

“This was not a split decision from the HPC either, this was unanimous,” said Critelli. “It goes to my point about not weakening the position or the little powers that the HPC has. It wasn’t split and it wasn’t close.”

Pollock advocated for more time, hoping that the issue could be resolved at the next meeting. Councilman Pollock said that more time with the issue and the code could provide clarity. However, other motions were introduced before this idea could advance.

A motion by Templeton and seconded by Critelli confirmed the decision made by the HPC. Council members Templeton, Critelli and Pollock were in favor. Council members Pappenfort, Kasper and Shore were opposed. Mayor P.T. Wood broke the tie with a vote that opposed this motion.

With the motion dying, the Council returned to another deliberation period where a new motion was made by Council Member Harald Kasper and seconded by Shore to reverse the HPC decision. Council members Kasper, Shore and Pappenfort were in favor of reversing the HPC’s decision. Council members Templeton, Pollock and Critelli were opposed. With another tie, Mayor Wood cast his vote in favor of reversing the decision made by the HPC. The motion passed.

Future discussions will be had by the Salida City Council and Salida City Staff  regarding ghost signs and murals as part of the future land use code restructuring.