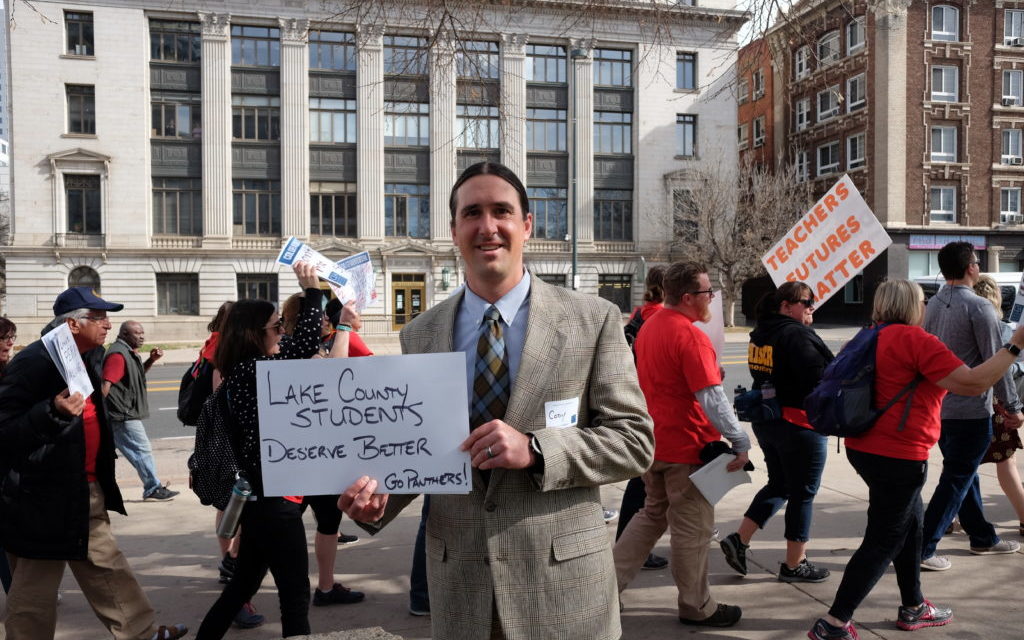 In the wake of the storming of the Capitol, Lake County School District Social Science teacher Cody Jump has found himself with yet another opportunity to address politics and conflict with his students.

“The very next day I had, I turned the lesson around to look at the history of presidential transitions,” Jump said. A colleague teaching American Government had a whole lesson set up about it. “He had a portion of his class where he had them actually tune in live to the impeachment debate, and his approach was really just trying to explain to those students what was happening.”

Jump has been teaching at Lake County High School for eight years. Over the past four years, he has tried to focus on the implications and meaning of what’s unfolded on the news.

“For one of the lessons that I put out for our actual government class, we read letters from past presidents to their successors, starting with George Bush Sr. and his little note for Bill Clinton all the way down to the notes that Obama left for Donald Trump. So that’s giving political context, how things are typically done, the dignity of the office, the gravity of the position that has definitely been disrupted significantly lately.”

In his experience teaching over the past four years, the idea of normalcy in politics has come to the forefront.

“The way that we traditionally approach political science or government education involves explaining sort of how things work, the history behind the institutions, some examples of institutions in action,” he explains. “It’s been transformed under the Trump presidency to be a lot of explaining, ‘It’s supposed to work this way but here’s what’s happening right now.’ So, there’s this complete added layer of having to try to explain how…the current president has to navigate within institutions and how he’s pushing the limits on them.”

As a social science teacher in the current political climate, Jump says he often feels unsure of how to proceed. “I feel like I’m playing with fire every day. There’s virtually nothing in any of our social science textbooks – American history, American government, sociology – which is not a political property at this point,” he says. “‘Try to present material on both sides and try to keep it down in the middle,’ is almost quaint at this point. The middle has been claimed by somebody. A superintendent told me the other day to just try to present the facts. Well, that’s not what we do in history. We show some facts and then we interpret the facts….The facts are disputed, sources of information are called into question, and if you use a certain source it communicates a certain political position.”

The new politicized atmosphere around facts and truth has created some difficulty in how he presents information to students.

“Having some controversial interactions, even with parents that were not necessarily part of our social mix in years,” he says. “Things are so polarized that even public education is polarized. How any of us discuss American history or American government is a polarizing and polarized activity. That’s the sort of cloud that is constantly dangling over us.”

As a history teacher, the conundrum of objectivity is not new to Jump. “I continue to struggle with the realization that so many of the social conundrums from 100 years ago have very obvious answers now, […] the challenge being how to navigate your present moment and to ensure that you have the proper sort of ethical understanding of the situation and to not equivocate harm in society merely for the sake of some idea of balance,” he says.

“If I was teaching in 1850, I would be nauseated with myself to think that I offered a point-counterpoint on slavery,” he added. “We hope to have the courage to call out social and historical wrongs in the moment, in real-time, and not 100 years later after people’s lives were already — you know — damaged. It’s a tricky task. How do you do the right thing and maintain credibility in this environment?”

Jump says he hopes he’ll be able to pass on a historian’s level-headedness to his students in how they approach current events. The first step is pointing out the uniqueness of the past four years. The second step, and what Jump sees as the big drive with his students, is giving them the tools they need to understand history as it happens.

“What I’ve worked on is really just trying to give them analytical tools to be systematic and scientific for how to break down sources of information, how to break down particular events and relate them to other events, with a particular focus on historical causation, and how to understand better the answer to the ‘Why?’ question,” he explains. “Here are the tools we use as historians, which hopefully makes us less prone to the emotions that go along with politics, less prone to unvetted ideas, and hopefully, just more able to process the sort of underlying truth of various events.”

As discussions arise, Jump has been impressed by the conscientiousness and compassion his students have shown one another in their discussions and how generous and kind they are when expressing their own opinions.

“It’s inspiring after we see how the grown-ups behave in a lot of cases.” He says he tries to encourage these conversations, even when it’s uncomfortable or difficult. “That’s sort of what we’re here for. It’s okay, it’s the way democracy works. And the kids are really lovely with each other, even when expressing contrasting ideas. I’ve had the good fortune that I don’t have any students, currently, who like stirring up trouble in a sense. But I have had students in the last several years definitely take issue with my own sort of characterization of Donald Trump’s policies. It hasn’t been a lot, and they generally are…a very small minority in our community. But the kids have been pretty awesome this week.”

As hard as these conversations can be and despite the hazards posed by bringing current events into the classroom, Jump feels they teach students the skills they need to engage in the public sphere.

“We fancy ourselves in America to be an open democratic society… It is a governmental and social system that operates on open dialogue,” he says. “And in this day and age…engaging in the public sphere of democratic discussion is digital. It’s the stuff that people are posting on whatever site that they’re on, depending on their generations. We don’t really have these spaces, and if we are able to, in our schools, provide safe democratic spaces where we can argue, where we don’t have to agree, that is almost our duty at this point because there are so few other places in our society with that occurring. The old political debate at the coffee house is just not the thing. The public sphere is now like me putting a flag in the back of my truck and driving around town, honking.”

“It’s so crucial to not shy away from the tension, to not shy away from the awkwardness because kids do not have practice at this anymore,” he continues. “We’re so out of practice with authentic disagreement, which is a given in a pluralistic democratic society….And I really think … [young people] are simply less jaded and more concerned with each other’s feelings than we are as adults, so…giving them lots of opportunities to have these hard conversations might be one of the most important things that I’m doing right now because goodness knows they’re gonna have to talk about all sorts of stuff we haven’t even thought of, that don’t even exist yet before they’re done.”