The Fremont County Sheriff and members of the management team for the Decker Fire gave an update on pre-evacuation status for Howard residents at an Oct. 14 meeting at the Howard Volunteer Fire Station.

Incident Manager Mike Tombalato called the southernmost part of the fire line “quiet.” He reported that firefighters had put retardant around the break-out area where the fire jumped the Rainbow Trail by Bear Creek last Saturday, in the easternmost part of Chaffee County. Structure protection equipment has been placed in that area and bulldozer lines are being constructed around Howard. 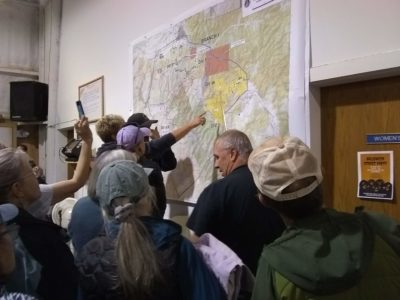 Safety Officer Keith Long reported that there had been no injuries in 110,000 firefighting hours. He added that property damage  in Fremont County has been limited to a couple of outbuildings in Bear Creek.

Fremont County Sheriff Allen Cooper announced that citizens on evacuation status who could not gain access to their P.O. boxes could obtain mail-in ballots for the upcoming election by contacting county clerk Justin Grantham.

Regarding his decision to put Howard on pre-evacuation notice, Cooper said, “Nobody wants to evacuate. “But one thing I’ve learned about Mother Nature is that she doesn’t care. My goal is to keep people safe.”

Cooper also said that Fremont County deputies were patrolling evacuated residents’ property. Responding to rumors that Highway 50 might be closed, Cooper stated that if that were to happen, an emergency notification would go out to all the residents of western Fremont County, whether they live in the fire zone or not.

Another resident asked if they would be able to return to their houses at the time that they received the evacuation notice to to evacuate their livestock. The sheriff said no. “Once you evacuate, you become my responsibility.

“That’s what the pre-evacuation notice is for. To put a plan in place to deal with animals – get in touch with neighbors – make those plans first.”

“The reality of this fire is that I can’t keep it in the forest,” said San Isabel Forest Salida Ranger Jim Pitts in his update. “The fire has reached the space in the vegetation line where tall trees give way to pinon and juniper.

“On the one hand,” said Pitts, “this gives the firefighters an advantage in getting the fire under control. On the other hand, it means that the fire [may be]will end up being fought in your back yards.”

Currently, the communities of Wellsville and Swissvale in western Fremont County remain on evacuation status.