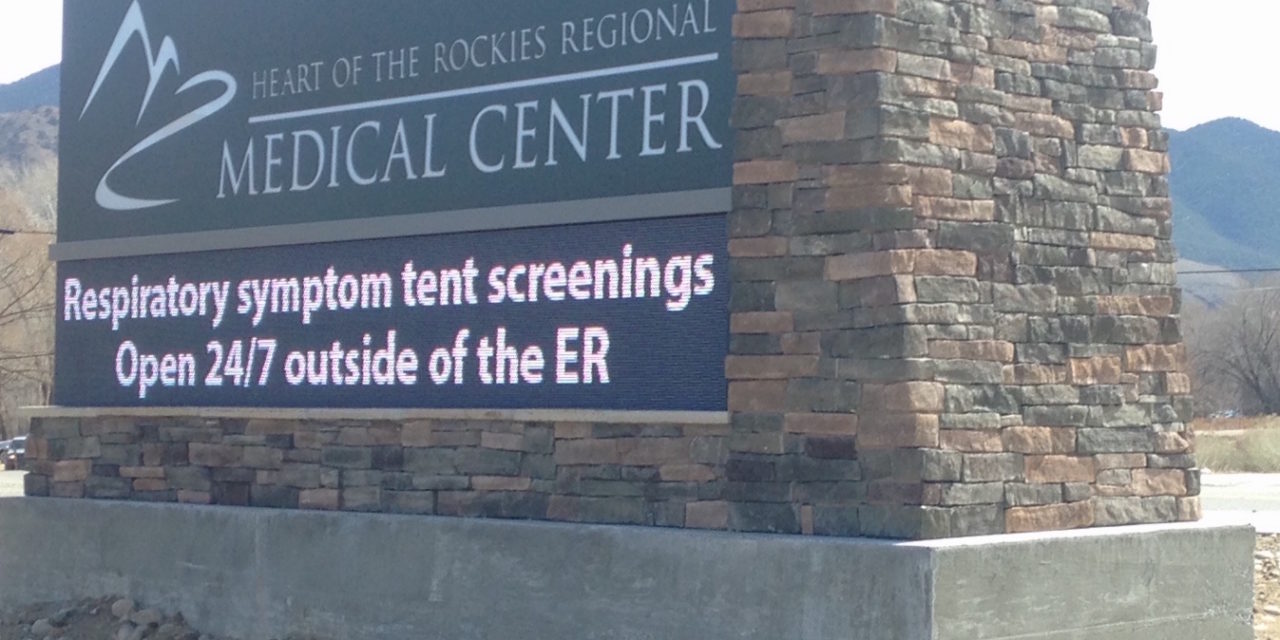 The impact of the COVID-19 crisis on Heart of the Rockies Regional Medical Center (HRRMC) was painted as a good news/bad news situation for the board of directors virtual meeting Tuesday, April 21.  The news ranged from regarding its success providing critical medical care to shouldering the hefty financial impact.

While the hospital has not had the surge of coronavirus patients some feared, and staff members have adapted to changing roles while keeping virus-free to treat patients, sharply curtailing some services at the facility has had a definite impact on the financial picture.

While the state begins to slowly lift some restrictions, the hospital is already working toward getting gradually back to elective surgeries as the hoped-for recovery unfolds.

The financial picture for the first three months of 2020 demonstrates the impact of the overall changes in hospital operations during the first quarter.

Lesley Fagerberg, Vice President of Fiscal Services, said the nearly three million dollar shortfall in total revenues was about 20 percent less than budget estimates, including about $500,000 less in clinic revenues.

Board chair Debbie Farrell told the board that there was some help available from federal government under the CARES program to cushion the economic impact of the virus, in the form of $1.1 million allocated for HRRMC. She also said documented expenses could be reimbursed from the Federal Emergency Management Agency (FEMA) at up to 75 percent.

She said a return to surgeries as pent-up demand gets met might lead to better fiscal health after “a tough couple of months ahead.”

Still, in the category of Days of Cash on Hand, HRRMC has more than 200 days of cash to meet payroll, vendor and other costs, the report stated.

Vice President of Nursing Services April Asbury reported clinical care guidelines were developed for COVID-19 and said several Registered Nurses had cross trained to the Intensive Care Unit and operating ventilators; other departments were also adapting to changing demands during the virus crisis. Critical care preparedness was a focus for the Emergency Room and trauma, with workflows set up and functional.

She described taking a lead role as community liaison for emergency preparedness and getting supplies through the national stockpile and county supplies; for instance 6,000 masks were received last week. But, she said, despite doing pretty well with supply levels, there were still ever-evolving concerns about lab supplies and they were looking at options for faster deliveries.

Jean Moltz told the board the HRRMC Foundation is looking at an alternate date in October in case the organization’s annual Jewel Ball fundraiser needs to be moved from its planned September date.

CEO Bob Morasko reported an agreement to operate the West Custer Health District has been executed and Vice President of Business Development Peter Edis is leading the effort to have the health clinic certified as a hospital-based rural health clinic. After certification, anticipated in two to four months, Morasko reported it will be open one-half day per week and submit claims to insurance carriers; with plans to take over complete operations of the Health Center after payment of claims. A family physician has been signed for the Westcliffe position and will relocate there in October, he stated.

Morasko said he was confident the staff was ready to move forward with restarting outpatient surgeries surgeries and hoped to develop a plan by next week. No one wants to see furloughs or layoffs, he said.

Morasko recently told Ark Valley Voice the administration and staff have proven adroit at changing internal operations to prepare for the coronavirus battle, while handling the unknowns and staffing protocols so that he feels much better prepared if HRRMC faces a similar situation in the future.

Morasko and board members made a point to commend the entire hospital staff “for their courage and efforts to provide services to our community” during the local impact of the pandemic. “I don’t know of any hospital that’s done it better,” he said.