Young science enthusiasts got to learn about rocks and had a hand in experimenting in testing and creating different types of rocks at the second annual Children’s Science Festival sponsored by the Central Colorado Humanists.

Children and parents gathered at the Salida Scout Hut Dec. 22 to see and take part in the program “What Rocks You?” presented by local award-winning science teacher Greg Justis. 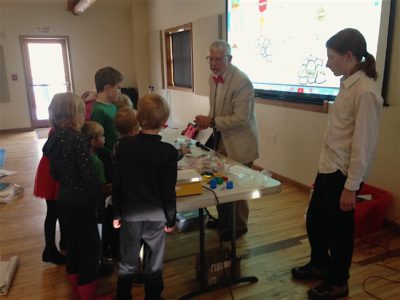 Science teacher Greg Justis, with his assistant Kieran Hall, right, lectures on the different types of rock at the second annual Children’s Science Festival at the Salida Scout Hut Dec. 22.

The lecture and demonstration included ‘lab time’ for the students to experiment with different types of rocks, learning their characteristics and how the various types of rock; sedimentary, igneous, metamorphic and others were formed.

Inspiration for the children’s science fest stems from the Christmas lectures started in 1824 by famous British scientist Michael Faraday. The Royal Institute in the United Kingdom continues the lectures to this day, some 193 years later.

Justis has been teaching Science, Technology, Engineering and Math (STEM) classes at the Salida Boys & Girls Club for the past seven years including, robotics, chemistry, rocketry and geology.  He also supervised the construction of full-scale size inflatable dinosaur models, as well as a 50-foot inflatable sperm whale.

Justis said he was impressed by the curiosity and enthusiasm of the children while the parents said they appreciated the opportunity for their children to learn.