For the second time in a generation, (the third time for Baby Boomers), the U.S. is hurtling toward an impeachment inquiry of the President of the United States. The speed of the inquiry contrasts with two years of the tortoise-paced Mueller investigation and is enough to give Americans whiplash. Overnight, polls indicate that public support appears to be swinging away from the president.

A whistleblower complaint submitted in August was finally released this week by the acting Director of National Intelligence (DNI) Joseph Maguire, who testified before the House Intelligence Committee.

The day before that testimony, the White House released a memo documenting President Donald Trump’s phone conversation with the President of Ukraine. In it, Ukrainian President Volodymyr Zelensky, raises the need for U.S. military equipment for his beleaguered country. Followed by the President of the United States says, “we need a favor though…” that would benefit his 2020 election campaign. 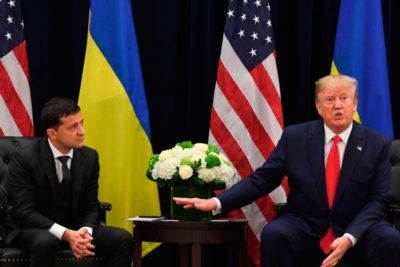 US President Donald Trump and Ukrainian President Volodymyr Zelensky speak during a meeting in New York on September 25, 2019, on the sidelines of the United Nations General Assembly. (Photo credit: SAUL LOEB/AFP/Getty Images)

The conversation itself has been called “deeply concerning” and “problematic” by congressional Democratic leaders. Speaker of the House Nancy Pelosi went further, calling it “nothing less than a shakedown” of the Ukrainian president for Trump’s personal gain.

Within the past few days, 226 members of the House of Representatives have come out in support of an impeachment inquiry. Articles of impeachment could continue the process and only require a simple majority of 218 votes in the House before moving forward to the Senate.

House Democrats are sounding a somber tone this week. Pointing out that it isn’t just the president’s conversation, which suggests that he put his personal objectives ahead of the security of the country, that is of concern. What was subsequently done with the record of the conversations is also alarming.

According to the whistleblower complaint, the White House has tried to bury records of those conversations. It reveals that White House lawyers directed that records of Trump’s calls with foreign leaders be taken out of the normal servers and placed into a code-protected computer. That is typically used for highly classified information. Intelligence experts describe this as a stark departure from how the server is usually used and how memos of the president’s exchanges are typically handled.

The revelation adds more intrigue to what is already an alarming situation.  The timeline of events shows that the president, one day after Robert Mueller’s testimony to the United States Congress about Russian interference in the 2016 election, appears to have solicited help for the 2020 election. As detailed below, the U.S. may not even have a functioning Department of Justice. According to claims by the president’s private attorney, Rudy Giuliani, he was setting up meetings with Ukrainians at the behest of the Department of State which may be implicated as well.

“He’s gone rogue,” said Pelosi during an interview with Joe Scarborough on MSNBC, about Attorney General William Barr, who was named in the whistleblower complaint released Tuesday. She went on to say that impeachment is “no cause for any joy. This is a sad time for our country.”

Pelosi pointed out that Barr appears to have participated in covering up the actions of the president, then obstructed the release of the whistleblower complaint to the congressional committee that is charged with oversight.

Barr was referenced repeatedly by the president during his conversation with Zelensky, asking for Ukraine to work with Barr and Giuliani to investigate his likely Democratic opponent Joe Biden. When Maguire brought the complaint to Barr and the White House, Barr declined to release it to the House Intelligence Committee, as required by law.

Nearly 300 ex-national security and foreign policy personnel issued a statement this morning supporting the impeachment inquiry. They are sounding alarm bells that indications of the president’s alleged disloyalty to his oath of office may have jeopardized the security of our country.

Polls overnight have begun to show a rise in public support for impeachment proceedings and a growing disapproval rating for Trump. The Wall Street Journal poll lists a 53.2 percent disapproval rating of the president’s performance.