Word just in from local theater producer Jennifer Dempsey: $10 tickets are available for the Friday evening performance of “The Bonfils Girl”, thanks to a generous  sponsor. Show starts at 7:000 p.m.

Local theater producer Jennifer Dempsey is presenting The Bonfils Girl at Box of Bubbles, 206 E. 2nd Street in Salida, with three performances in honor of International Women’s Day. Performances will be held at 7 p.m. Friday, March 8, and again at 2:00 and 7:00 p.m.on Saturday, March 9. 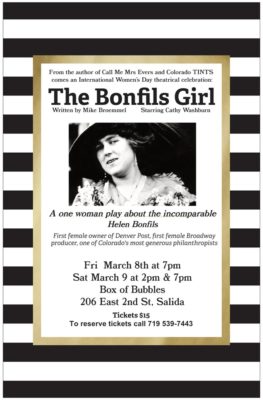 The Bonfils Girl is another one-woman play in the “Iconic Women’s Theater Series” by Mike Broemmel, whose Call Me Mrs. Evers had its world premiere in Salida last month. It tells the story of one of the most fascinating women in Colorado’s history, Helen Bonfils. Known as a philanthropist, and Broadway producer, she was also owner/publisher of the Denver Post, which she inherited from her father, Denver Post founder Frederick Bonfils, in 1933.

Bonfils Senior was “kind of a scoundrel”, according to playwright Broemmel. “He owned casinos and did bootlegging, along with newspaper publishing.” His daughter Helen, a much more devout Catholic than her father, was apparently so concerned about the state of his well-being in the afterlife that when he died, one of her biggest philanthropic acts became the building of Holy Ghost Church in downtown Denver. The church was explicitly dedicated to paying down the amount of time Frederick would be spending in Purgatory. Broemmel, who attends Holy Ghost, first became aware of Helen Bonfils as the name on its cornerstone, and said that he wrote part of the play sitting in its pews for inspiration.

“When her Dad passed,” said Brommel, “Helen took control of the Denver Post and became the first woman publisher of a major newspaper.” Bonfils ran the paper for 40 years, and during that time she became noted for her passion for the theater, which led her to another career first: becoming the first major female producer on Broadway.

However, despite her pioneering achievements as a career woman, it was arguably for her philanthropy that Bonfils was most famous during her lifetime. “She was an extremely generous person,” notes Broemmel. “She spent a lot of time hands-on helping people directly,” from founding the Bonfils Blood Bank to meeting with lines of people seeking her assistance outside her office at the Post.

Bonfils had a rich professional life and an equally rich, if complicated and ultimately tragic, personal life. At the age of 64, she married her ex-chauffeur, whom she set up in business as a wildcatter oilman: a character known as “Tiger” Mike Davis, who was 41 years her junior.

“She was Colorado’s original cougar,” according to producer Jennifer Dempsey. Bonfils ultimately divorced him, but not before getting entangled with a lawyer named Donald Sewell, who battled it out with Davis for Bonfils’s fortune after her death. Ultimately, Sewell prevailed, and started the Denver Performing Arts Center. “So, it’s really Helen Bonfils’s money that started it,” noted Broemmel, “even though her name isn’t even on a plaque there, anymore!”

Helen Bonfils may be virtually forgotten these days, but the play, starring Cathy Washburn, is a step toward restoring her in the public memory.