Investigation Underway on Who Wrote “Trump” on Florida Manatee

Wildlife authorities are investigating the sighting of a manatee with the word “Trump” written on its back. The sighting has prompted a plea for help from The Center for Biological Diversity which is offering a $5,000 reward for any information about the incident. The U.S. Fish and Wildlife Service (USFWS) said that the manatee did not appear to be seriously injured and it seemed the word was written in algae.

According to the USFWS “Manatees are an endangered species and protected by the Marine Mammal Protection Act of 1972. It’s illegal to feed, harass, harm, pursue, hunt, shoot, wound, kill, annoy, or molest manatees.” 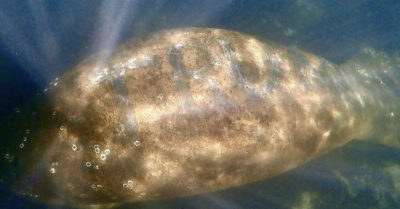 “We don’t typically see manatees harassed like that,” Ms. Hailey Warrington told The Sarasota Herald-Tribune, who was observing manatees on a tour at the time. “I started documenting so we could report it. That’s why I have the photos and video in the first place.”

Director of the Florida Center for Biological Diversity, Jaclyn Lopez told the New York Times “Manatees aren’t billboards, and people shouldn’t be messing with these sensitive and imperiled animals for any reason.”

Lopez continued “However, this political graffiti was put on this manatee. It’s a crime to interfere with these creatures, which are protected under multiple federal laws.”

The unofficial mascot of Florida, manatees are a large species of slow-moving mammals. There are around 6,300 manatees currently in Florida. The average adult manatee is about 10 feet long and weighs between 800 and 1,200 pounds. They are known for their extremely gentle nature.