On Nov. 14 the Salida City Council reviewed a presentation of the proposed 20,000-square-foot, Salida Fire Station to be located at 611 Oak Street. The presentation included a review of the health, safety, productivity, and energy-saving features of the building and site concept.

While the current estimate of $15,350,000 might appear large for a small city, members of the council heard that every aspect of the structure and its site has a planned rationale. With the growth that Salida and the South Arkansas Fire Protection District has experienced, it appears time to address the shortfalls of the 120-year-old fire station.

A Short History of the New Fire Station

Salida Fire Chief Doug Bess noted that when he first became chief 10 years ago, he knew then that the 1902 fire station at 124 E Street had been patched together for too long to be remodeled (again). His message; the health, safety and morale of the growing number of firefighters were being impacted.

(In fact, in 1902 that same year the fire station was built, the Ohio and Colorado Smelting Company built a smelter about one mile from the city, and the population stood at around 2,000.)

The need surfaced again during the annual budget process for 2017-2019 and was included in the Capital Improvement Program at that time.  A formal Needs Assessment was conducted in October 2020 and presented to the council on December 9, 2020.

After a thorough evaluation of competitive proposals, in May, 2022  council members chose Neenan Archistruction of Ft. Collins, Colorado as the design-build firm for the station.  Importantly, the new station has a dual safety focus; it will house both Salida Fire and the South Arkansas Fire Protection District. 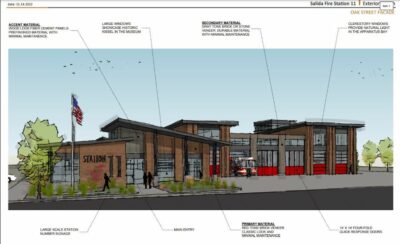 Architect Seth Clark pointed out the various zones for each function and also spoke to the orientation of the building; designed to maximize natural daylight while reducing energy costs and aiding in snow melting. He noted that safe traffic flow, public and staff parking and efficient use of the land parcel were also taken into account as well as future space for a potential “live-fire” training area. (The State of Colorado may provide a grant to build such a structure on a future concrete pad.)

Clark also discussed the use of low maintenance, long-lived red brick, and metal accents to achieve a “classic” fire station look and character, representing a nod to Salida’s historical downtown structures. Clark said that the design’s functionality and aesthetics, are the result of an all-day collaborative design process session that brought functional needs front and center. On that same day in June 2022 stakeholders reviewed a collection of other recent fire station designs indicating their preferences and why they made their choices.

The firehouse design team pointed out that they had worked to align the building envelope and systems with the Salida Climate Action Plan. The building will be solar-panel ready with up to 60 kW of electricity (but not solar-powered at the outset). It will be designed according to the 2018 Energy Code (Chaffee County is currently working at the 2006 Energy Code standard). Neenan further plans to include as many elements of the latest (2021) Energy Code as are practical.

Preconstruction Manager/Chief Estimator Tim Stern reviewed a draft schedule with a half dozen major “swimlanes”, summarizing the detail of a 220-line item proposed schedule; a construction swimlane beginning in March, 2023 and running through April, 2024, that the public will observe as the schedule proceeds.

A critical path of that schedule is the “procurement of long-lead time items” swimlane. Some items have a 52-week lead time and must be selected, sized, fully specified, and ordered, starting immediately so as to arrive and be installed when construction requires them. These include a generator (that will provide backup power for most of the facility to be fully functional), the electrical panels, and key mechanical/HVAC system pieces.

Stern then defined the “Schedule of Values” (major cost buckets) in the preliminary budget for the project, the largest single element being the HVAC system. Current costs are from selected partners, based largely in the Front Range and San Luis Valley; Pueblo and Colorado Springs with some local participation.

“Total budget, $15,350,000…real preliminary right now…as we move forward, we’ll be getting this validated with real numbers and real subs and getting bids from some of the smaller trades,” Stern said. The number includes Neenan’s fee, a seven percent ($1 Million) contingency sum, a performance bond, and project insurance; all required elements.

The Neenan team responded to some prompts for details from City Administrator Drew Nelson, as well as questions from the elected officials. Continuing the energy-saving theme, Architect Clark explained more about the geothermal wells on the east side of the property and how they would provide radiant, in-floor heating in the apparatus bay. No natural gas service will be provided to the site, so electricity will power controls and lighting. A variable refrigerant flow (VRF) system and heat exchangers will provide temperature control.

Members of the Salida Fire Department pause for a group photo after giving a presentation describing their various roles during the Jan. 7, 2019 Salida City Council work session. AVV file photo.

The advanced mechanical/HVAC system is pegged at a premium of some $800,000 over a “conventional” gas/boiler system; however, it is expected to pay for itself in the long term as well as avoid any state or local mandates against natural gas usage that are already taking hold.

Nelson spoke of some of the efforts the team has made in their twice-weekly meetings to help control costs. These included evaluating numerous HVAC systems, reducing slightly the size of the bays (which are still adequate for future, larger rigs), and passive snow melting vs. a powered system, among others.

Council member Harald Kasper said he appreciated the thoughtfulness and energy efficiency but had questions about cost comparisons with other commercial structures and their costs per square foot. Stern said that actual costs for recently built fire stations run some $600-650 or more per square foot (twice the amount of general construction). “What’s in this building that’s not in a typical commercial structure? – almost everything,” said Stern. “Redundant electrical, and HVAC systems, a shell designed for way beyond 30 years, across the board, more expense.”

City Administrator Nelson countered that conservative numbers have been used and they will know more once the geothermal well fields are sized. He added that the city will seek grant opportunities that could bring the numbers down. Once actual requests for bids are issued, competition will help, but inflation and schedule delays could also increase costs.

Treasurer Merrell Bergin asked for more details about the cost and reliability of the geothermal HVAC system. Stern explained the overall concept and said that these are in wide use in other cold climates. (Nelson noted that Gunnison County uses them all over the area.) “The system will be very energy efficient in the summer and relatively comparable to traditional systems in the winter,” Stern said. “There’s also built-in redundancy in geothermal. If one well or one pump goes down, you still have a system.”

Mayor Shore then asked Salida Finance Director Tihonovich to address financing aspects. Tihonovich said that the city will need to issue debt to finance it. “About $1.1 Million per year in debt service will need to be built into the operating budget for at least 20 years. We will work with Ehlers (the city’s financial advisor) to devise a debt issuance structure, probably a Certificate of Participation, she said. Tihonovich emphasized “this does not require taking it to a vote of the people … we don’t anticipate increasing taxes for this and our debt load is pretty low right now,” she added.

Harald Kasper requested a list of owner-responsible items and what those might cost. Nelson said they had been developing such a list and would come back with numbers to help determine the overall cost of the project.

Nelson also agreed that a cost model showing the payback time for the geothermal system might help council member Alisa Pappenfort address questions that she gets from the public about total life cycle costs, beyond the “sticker price”.

Refining cost estimates, preparing construction drawings, and researching a 10-year financing plan are among next steps. Neenan Vice President Donna Smith closed by saying they would come back with a contract, final numbers and an energy cost modeling report in February 2023.

With widespread support from members of the council and the mayor, the discussion concluded and council members moved to adjourn.