It Takes a Village to Build an Earthship 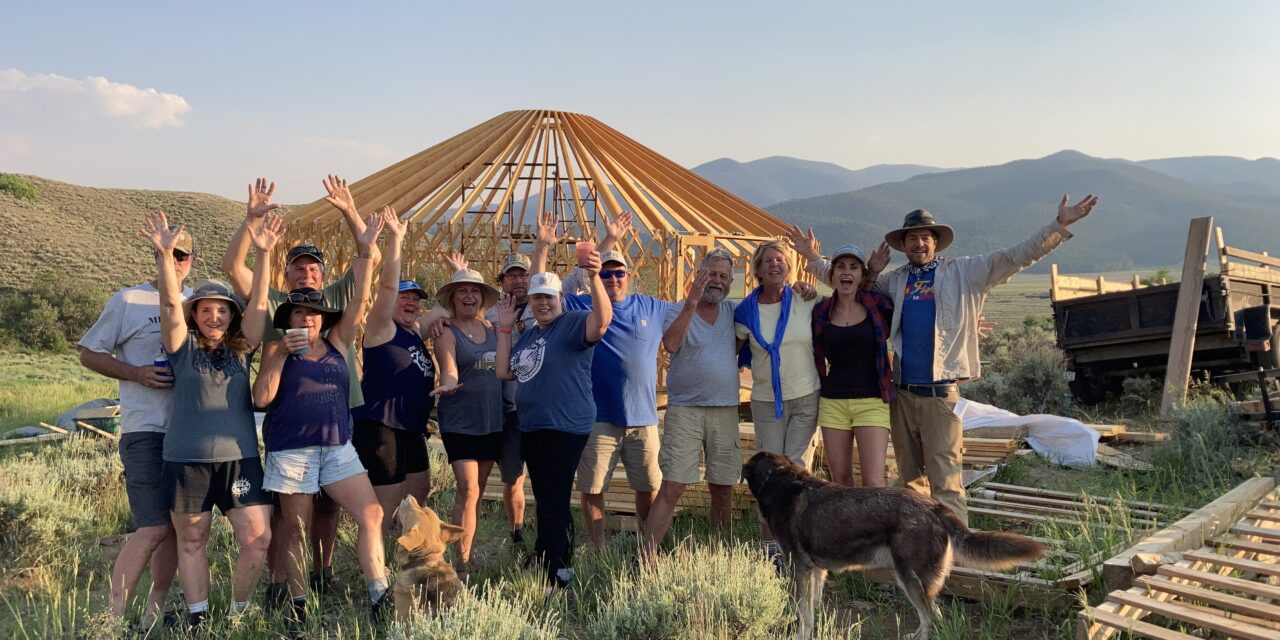 Affordable Housing Project on Poncha Pass that Supports the Environment

Chris White grew up with a deep awareness of impending global environmental degradation, the weight bearing down on his generation, he describes, as “stifling.” He sought authentic ways to live fully while simultaneously seeking to make a positive, lasting difference for the planet.

As a marine biologist, he worked on a project experimenting with wave energy, only to find that it was still leaving more of a carbon footprint than he had hoped. He’s a long way above sea level at this point, but closer to his ambition to develop a completely carbon-neutral community.

After more thought and research, White used an idea that evolved during the energy crisis of the 1970s; The Earthship.  Conceived by New Mexican architect, Michael Reynolds, the Earthship is a passive solar home constructed with free or low-cost materials, like used tires.  These affordable builds avoid using carbon-based energy sources to create durable and sustainable homes; leading to a completely carbon-neutral community.

“I realized that one of the best ways for me to make an impact was to start with my own living situation and build a sustainable community from there outward,” reflects White. 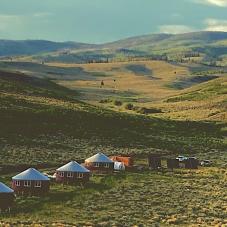 The Yurts at Poncha Pass

One of the biggest challenges to initiating his project was finding land in an area that would support alternative building methods.  White found land in Saguache County in early 2018 at the top of Poncha Pass. “Yurts at Poncha Pass” was born.  With the ultimate goal of building the Earthship, White started with erecting a few yurts, which were quicker to establish on the property, planning to establish a sustainable community from there.

Acquiring permits was still a challenge and White finds the current situation contradictory.  “Popular ‘McMansion-type’ houses, that, once built, often sit empty parts of the year, use toxic materials and nonrenewable energy sources, but are rarely turned down for permitting. I had to go in front of a committee of 11 people through a conditional land use permit to get the yurts approved. There can be more obstacles involved when attempting different types of housing.”

He now hosts four, 400 square foot yurts that provide affordable housing, often to the local workforce population who seek winter lodging.  The yurts also bring income to the project’s efforts with summer rentals. In the warmer months, White sleeps in a tent to allow for one more yurt rental.

Having self-funded his project so far, White has implemented an impressively efficient form of  “time banking”, a centuries-old method, where residents of the community trade and “bank” favors in lieu of money.  As an example, White volunteered to help a friend replace siding on a local house.  He learned a new skill and banked time with his friend to return the favor on his property.  This “favor system” can enable communities to save money on typical needs such as child care and maintenance.

He often uses the metaphor of a web, where one action can positively jumpstart another, mutually beneficial, action for the community. “When we help each other for the common good, you strengthen your community, stressors are eliminated and people get more time to do things they enjoy.” 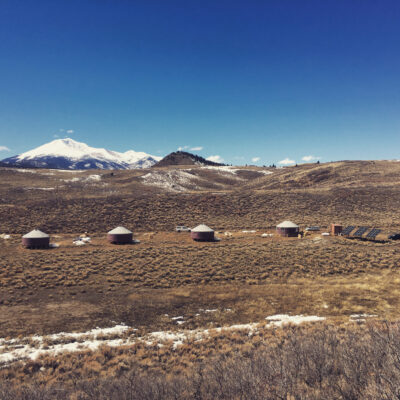 Another view of the yurt community White has built on Poncha Pass. Courtesy photo.

While the community becomes established, White is actively working on the beginnings of the Earthship.  He attended the Taos Earthship Academy to educate himself on construction methods.  “Building an Earthship is not a quick process. It requires patience and appreciation for the sustainable long-term over immediate gratification.”  He has been collecting up to 1,000 used tires from local dumps and private residents.

Each tire is filled with dirt from the surrounding area to create the building blocks for the house. “Filling the tire with dirt and plastering it with adobe encases the tire, thereby taking away the oxygen necessary for the toxic off-gassing to occur,” adds White.

His projection for the finished house is about two years.  Upon completion, the house will be added as an affordable housing option. He hopes the process as a whole will serve as a model for the affordability of renewable design, encouraging more carbon-negative building projects.

It takes a village to build an Earthship, so White is creating a hands-on opportunity this spring and next fall, for folks interested in the process to take part in a two-week workshop to learn about building sustainable communities. Participants will learn the craft each morning by actively building parts of the house, then attend classes in the afternoon covering information about tree grafting, time banking, planning and installing water, power, sewer, and other aspects of a sustainable community.

“The workshops are a win-win for everyone.  Participants learn about sustainable housing and in turn, the community gets help constructing their Earthship.” said White.  A $100 application fee goes to groceries. White is taking enrollment for the May and October sessions.

To learn more about White’s Yurts at Poncha Pass project and workshops, follow this link

Featured image: The enthusiastic folks learning to build a yurt at the Yurts at Poncha Pass. Courtesy photo.

Editor’s Note: This is the first article by new Ark Valley Voice reporter Jill Carstens, a Salida resident who will be covering Salida. She has a particular interest in the area’s housing challenges, as well as Chaffee’s thriving arts community 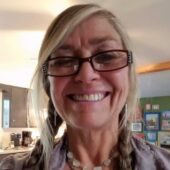