What does a town with public safety needs do, when needs don’t fit the BV budget? 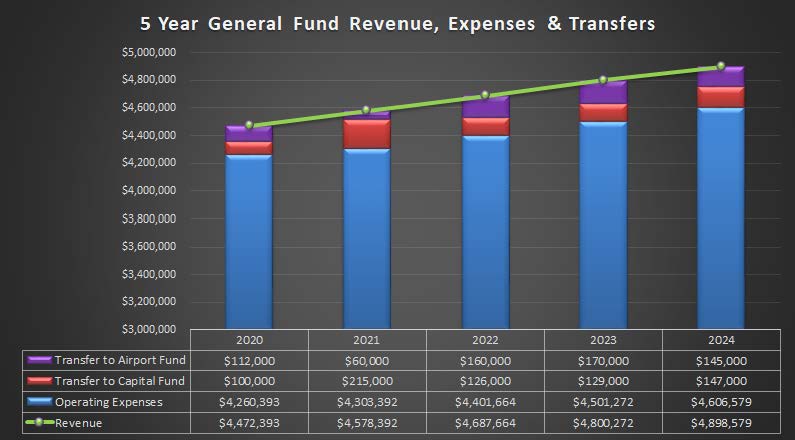 Buena Vista is moving into its 2020 budget plans, holding work sessions in conjunction with the Board of Trustee meetings to review the needs that must be funded, department by department. During continued growth, and as a strong summer tourism season delivered record sales tax to town coffers, the town is projecting a 2020 revenue of $4.5 million. But that doesn’t mean that essential public safety budget items can be funded now or in the next five years.

Ark Valley Voice sat down with Town Administrator Phillip Puckett and Town Treasurer Michelle Stoke before the recent capital expenditure workshop. They discussed how the town builds its budget. The officials walked through how funds are managed and priorities are established.

The town recently made its first five-year projection of general fund revenue, expenses and transfers. It showed steady revenue growth, rising to $4.5 million by 2024, but that revenue does not meet the town’s capital needs. When asked about what keeps them up at night, you hear an urgency that critical public safety capital items are not in the budget.

“It’s public safety,” said Puckett. “We need a new firehouse and a new police station and better equipment. But those items aren’t in the operating budget, and they can’t be funded with current revenue projections. We want people to understand how the budget is built, what is in it, and what isn’t.”

“We’re behind, and public safety items have never been funded,” said Stoke. “In fact, until two years ago, we didn’t even have generators in the police station or the community center – and the community center is the public evacuation center. How can that be when we can’t provide power?”

“We don’t have fire trucks with ladders long enough to reach our highest buildings,” said Puckett. “Not having fire trucks or a generator – when the wind took out the power at the fire department, the doors had to be raised by hand because we didn’t have a generator! Our fire station doesn’t now have a bay big enough to put a normal fire truck in it.” 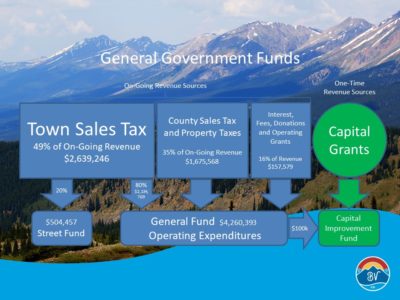 The town’s current operating budget is an annual budget with revenue from three main buckets.

Buena Vista manages a General Government Fund, an Enterprise Fund, and a Special Revenue Fund (which includes the town’s allocated portion of lottery proceeds for the Conservation Trust Fund).

The general fund receives county sales tax and property tax revenue (35 percent of revenue), interest, fees, donations and operating grants (accounting for 16 percent of town revenue) and a portion of the town sales tax (49 percent of on-going general fund revenue). The roughly $500,000 Street Fund is fueled by the remainder of the town sales tax. The town can also apply for a one-time revenue source capital grant to go into capital improvement funds.

“This is not a political question. We have to continue to prioritize [public safety structures and equipment]. Where every year we put it off, the problem is getting worse. It’s compounding our public safety risk,” said Puckett. He and Stoke reviewed the careful decision process underlying everything the city does.

“Over the last three years, we have reduced headcount in some areas, shifted to add staffing in high priority areas. We’ve reduced administrative cost while increasing staff in the police, fire and public works departments,” said Stoke.

“I’m very confident in our staffing levels in every department,” said Puckett. “We staff once the demand is already there [for a given service], not before. Unless somewhere we stop providing a service, there is nowhere to cut. We’re running thin everywhere. We want people to understand that our capital needs are part of the cost of doing business [as a town].”

The town can apply for grants for some of its needs. In the last budget cycle, it started to do that for recreation and trails, but it is playing catch-up on the emergency side of the equation. Puckett said volunteers had managed to turn $10,000 into $200,000 to fund the BV single track and had also funded improvements to in-town trails. But he pointed out that “$10,000 doesn’t fund very much in public safety items.”

A budget bright spot is the town’s 2010 decision to create a dedicated streets fund, which covers street maintenance. This has freed up the capital improvement fund for other things [like generators].“We put $279,000 into the Capital Improvement Fund last year, but this year we’re projecting half that,” said Puckett.

To increase the police force, the town has to add a police car in addition to doing regular replacements. Two police cars can run $100,000. How does a town fund critical public safety infrastructure if it doesn’t fit into the operating budget? It has to look at new revenue sources.

To that end, Stoke is preparing documentation exploring the positive impact of a sales tax at two levels: either a 1.2 percent or a 1.4 percent sales tax. Another possible revenue source: considering a bond issue. Both might come up in the April 2020 election time frame.

Upcoming in Part II: Building a structurally-balanced budget. The town prepares for the Oct. 8 public meeting when it will begin budget hearings with advisory boards presenting their priorities.