Permits to cut your own Christmas tree are on sale in Chaffee County by both the Bureau of Land Management and the U.S. Forest Service. While visions of the Chevy Chase movie “Christmas Vacation” might be dancing in your head, odds are that you envision an outcome a bit more successful than the comedic antics that launched that holiday adventure.

The Rocky Mountain District of the BLM has permits available for sale in Cañon City at their Royal Gorge Office, allowing the cutting of Christmas trees on BLM public lands in the greater Cañon City area through December 24. The BLM manages more than 245 million acres of public land located primarily in 12 Western states, including Alaska. The local region from which Central Colorado residents can cut a tree is quite large.

“The Royal Gorge Field Office covers Chaffee County and really, all of Eastern Colorado BLM lands,” said Public Affairs Specialist Brant Porter. “Permits may be purchased for $10 per tree, Monday through Friday from 8 a.m., to 4:30 p.m.

There is a BLM limit of two permits per household. Printed maps of suggested cutting areas and information on harvesting a tree are available at the field office, located at 3028 E. Main St. in Cañon City. The office accepts cash, check or credit card.

The Forest Service district office says that requests for $10 permits to cut a Christmas tree on Forest Service-managed land can be sent in the mail with a stamped, self-addressed envelope, or people can stop in at the Salida Ranger district office at 5575 Cleora Road, Salida. It is also selling permits at its Leadville location at 810 Front St. or in San Carlos at 3028 E. Main, from Monday through Friday between : a.m. to 4:30 p.m. Tree sales will continue until Dec. 24 and the U.S.F.S accepts cash, checks or credit cards. 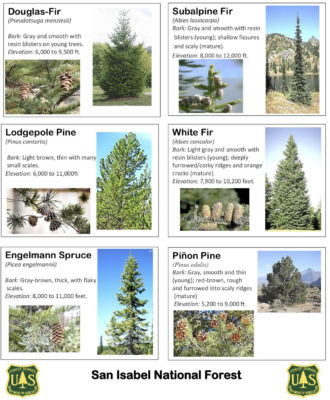 The Salida District Forest Service Office hands out a Tree Identification flier to those getting permits to cut their own Christmas trees on U.S. Forest Service-managed lands.

“Cash or checks are the safest ways because the Internet is down here so often,” said Autumn Almon in the Salida District Office. “It’s a pretty easy program and not a ton of rules, with the exception of asking folks not to cut in wilderness areas, or designated camp grounds and trail heads.

If you’re setting out to cut your own tree this year, Porter says the BLM has some recommendations for a safe and successful excursion. “The BLM recommends bringing along a handsaw, eye protection, rope or twine, extra food, water and blankets when you cut your tree,” said Porter. “Tire chains, a shovel and emergency supplies are also a good idea.”

“You would be surprised at the things you have to tell folks,” said Almon. “We just try to make sure that everybody tries to understand where to go and not go – and the right way to cut a tree.”

For newbies at cutting their own Christmas tree, there actually is a science to it. It turns out that if you want to cut a specific kind of tree – there’s an elevation for that.