U.S. Congressman for Colorado’s District 2, Jared Polis (D), who is running for Colorado governor, made a swing through Chaffee County over the Memorial Day weekend, stopping in Buena Vista on Sunday morning and in Salida that afternoon. He sounded key themes not just of his campaign but his work in public service, including access to education, renewable energy and protection of Colorado’s public lands. 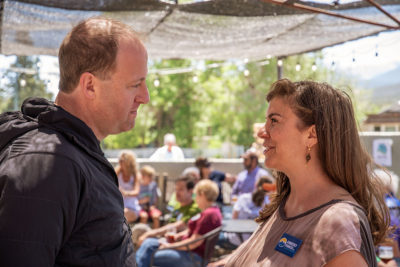 “Our natural resources are part of our identity, and we have to protect our public lands from encroachment by business and development,” said Polis. “We have to fund full-day kindergarten so our kids get the best start possible. As someone who’s built companies and served on the Colorado Board of Education, I can tell you that a focus on education, from early preschool to addressing the rising cost of higher education in this state, is both my vision and my priority.”

Polis spent time discussing problems with Colorado state funding mechanisms, including the Taxpayer Bill of Rights (TABOR) and the Gallagher Amendment, which is disproportionately shifting fire district funding out of rural areas into more populous metro areas. “Rural and suburban areas are at a disadvantage due to Gallagher, and I want to fix that,” said Polis. “Fixing TABOR will require the ballot box, and a lot of that money could go to education. Frankly, we have had decades of under-funding our public schools and need a bipartisan coalition of both Democrats and Republicans to finally fix this.”

Asked about his support for initiatives that would provide base broadband coverage for rural areas as well as build redundancy to prevent the sort of outages that can last for hours and occur multiple times in a week, Polis said he was in total agreement with the need for a solution.

“Broadband is 21st century infrastructure. Higher-speed connectivity is critical to be competitive in business or just about anything you want to do, including being able to work remotely,” said Polis. “The lack of high-speed internet in Colorado’s rural communities is a crisis that needs to be resolved – not just talked about but fixed.”

Polis said he wants to see more done to fund the state’s Broadband Deployment Fund and fix what he calls the “digital divide” between urban and rural areas. His writings include a recommendation to rewrite what he calls a poorly written standard for broadband called “effective competition” to ensure that resources are deposited into the Broadband Fund after the Public Utilities Commission certifies that a community no longer needs support for telephone service. In current practice, said Polis, the standard is vague and actually prevents money from being moved to fund broadband projects.

Another obscure Colorado law, passed as Senate Bill 05-152, prohibits local governments from budgeting for or building broadband infrastructure on their own, no matter how great the need, unless they go to the ballot box to opt out of the ban. Polis said this is wasting time and money and empowering telecom companies who are holding onto market areas without serving them effectively.

When asked if he would, as governor, sign a bill (currently stuck in committee) introduced by State Rep. Jim Wilson to provide a tax incentive for Colorado employers to build workforce housing, Polis said he was aware of the proposed bill and would be happy to work across the aisle with Wilson to bring more workforce housing to rural areas.

“I can’t point to a single thing that is working right now,” said Polis, speaking of the national gridlock regarding health care. “You know, in Congress, I’ve been part of a bipartisan working group called ‘the problem-solvers,’ and making progress is hard. Nationally, I have to tell you, when it comes to health care, I think the states will lead the way. It’s better to do health care as a multi-state consortium, and I think Colorado can play a major role.”