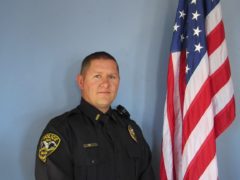 Salida Police Lieutenant Russell Johnson will take on the role of chief of police for the Salida Police Department, succeeding current chief Terry Clark, who will retire after 32 years of service, including almost 13 years as chief.

The city announced Johnson’s selection as the new police chief Tuesday, May 8, indicating he will assume his new role “on or about July 6.”

Johnson brings more than 15 years of experience in public safety, crime prevention, officer training and management, and leadership to the job.

Johnson’s experience includes service in the U.S. Marine Corps and the Salida Police Department. Prior to his current role as lieutenant, he served as a sergeant and a patrol officer.

Johnson began his work with the Salida Police Department in 2004. Since that time he worked to improve the department by contributing his expertise in law enforcement and administration, skills that proved instrumental in his selection as the new chief.

His dedication to the city of Salida and the Salida Police Department, as evidenced through his long tenure, will be a great asset to the community.

Johnson is also active in the community, serving on several boards, including the Greater Salida Recreation District and Communities That Care.

If not at work or otherwise serving the community, Johnson can be found spending time with his wife and three daughters and, occasionally, on the golf course.