The events that transpired in the past week since the death of Minneapolis resident George Floyd at the hands of Minneapolis Police officers, (one who held his knee into Floyd’s neck for more than nine minutes, causing death by asphyxiation) were tragic enough. But what has followed appears to include not just violent action by domestic and foreign extremists groups, but police attacks on journalists there to cover the events.

The protests that began shortly after that incident have spread across multiple days, to 140 cities nationwide, including Denver. They are documented to have attracted not just peaceful protesters, but an element that includes right-wing extremist militias, including white supremacists. 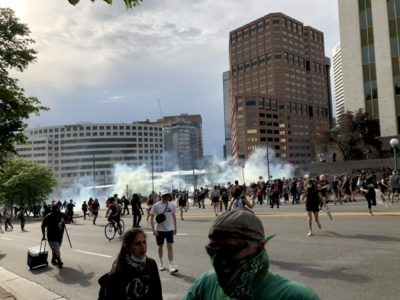 Police tear-gassed and shot pepper balls at protesters in front of Civic Center Station on Saturday as huge crowds ran, eyes and throat burning. Image by Beth Rankin @byBethRankin, who said that “protesters were not throwing anything or advancing on cops.”

The situation is volatile, and now it appears that journalists covering the protests have become a target of law enforcement. The Colorado Press Association (CPA) has reported that here in Colorado, as protests have occurred in downtown Denver over the death of Floyd, several journalists have been specifically targeted by law enforcement agents while covering the events.

The letter read, in part:

“It is inexcusable –and a violation of the journalists’ constitutional rights –for law enforcement officers to single them out for attack simply for doing their jobs in chronicling these events. If they are not interfering with officers, journalists have First Amendment and state constitutional rights to record and document the activities of police and protesters in public spaces.”

In response to these egregious violations, the CPA, Colorado Broadcasters Association, Colorado Freedom of Information Coalition and Colorado Pro Chapter of the Society of Professional Journalists have written a letter to Colorado law enforcement and civic leaders expressing deep concern over this issue and the threat to constitutional rights.

Among the incidents against journalists:

Journalists, because of our role reporting the facts and truth of sometimes volatile events such as the recent protests, and controversial subjects, are often in harms way, whether physically threatened or verbally threatened. What is not expected is when they cover volatile events such as the demonstrations we have seen in Denver over the past several days, that law enforcement will single them out for attack for doing their jobs. It inexcusable –and a violation of the journalists’ First Amendment constitutional rights

In 2015, the”Colorado Legislature in 2015 enacted a law that specifically underscores the right to record police. If an officer “intentionally interferes” with a person’s lawful attempt to record an incident involving a peace officer, that person has a statutory right to recover damages from the law enforcement agency.

This is not the first recent case of Denver Police going after Colorado journalists. In 2018, then Colorado Independent Editor Susan Green (who is now an elected officer of the CPA) was wrongfully handcuffed and detained while photographing officers. Following that case, the  Denver Police Department (DPD) agreed to get enhanced First Amendment training for its officers and paid $50,000 to settle the case.

Farschman confirmed this morning that a letter has been issued insisting upon the following protections of journalists, whose role is protected by the United States Constitution and is considered fundamental to the functioning of a democracy. Among the requests:

The CPA has proposed a joint press conference be scheduled for later this week, for the media associations and Colorado journalists to ask questions of the DPD. At this point in time, that conference has not yet been set.

Ark Valley Voice is a member of the Colorado Press Association.