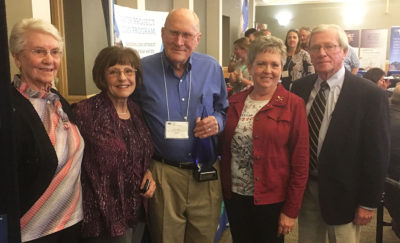 Ken Baker, Salida, holds the Bob Appel Friend of the Arkansas Award, which he received at the 2018 Arkansas River Basin Water Forum in La Junta. From left are Linda Baker, Marcheta Goodwin, Ken, Linda Cook and Bob Senderhauf. Linda is Ken’s wife; Marcheta was the wife of the late Denzel Goodwin, a founding member of the Upper Arkansas Water Conservancy District; Cook is Upper Ark district office manager; and Senderhauf is chairman of the Upper Ark district board of directors (courtesy photo).

Ken Baker, one of the founders of the Upper Arkansas Water Conservancy District, received the Bob Appel Friend of the Arkansas River Award at the recent 2018 Arkansas River Basin Water Forum in La Junta. Baker was chosen for the honor because of his lifelong service protecting water rights in the Arkansas River basin.

“Through his dedication and understanding of water rights in the Arkansas Basin, he was able to develop a hallmark water-right protection plan known as umbrella augmentation. That plan has benefited the citizens of the Upper Arkansas Water Conservancy District incalculably. It has been an honor to work alongside him,” said Scanga.

Baker said of receiving the award, “It was kind of a surprise to me, but it’s always good to be recognized by your peers for the work you’ve done. … It’s a great honor.”

The Arkansas River Basin Water Forum presents the Appel Award annually to recognize an individual who has worked to improve the condition of the Arkansas River in Colorado and has helped promote best management practices for using water in the Arkansas basin.

The award was established in memory of Bob Appel who, as coordinator for the Southeast Colorado Resource Conservation and Development Council, provided strong leadership for the Arkansas River Basin Water Forum. Past recipients of the Bob Appel Award serve as the award selection committee.

Baker helped establish the Upper Ark district 40 years ago to protect local water rights at a time when irrigation wells in the Lower Arkansas Valley were allowed to continue pumping water while irrigators in the Upper Ark Valley were ordered to stop diverting water into their irrigation ditches.

The court decrees for the wells were 75 years junior to upper valley ditches that had been shut down, and ultimately, scientific data demonstrated that the wells were pumping water from aquifers that feed into the river.

Once the groundwater was proven to be tributary to the Arkansas River, the Colorado Division of Water Resources began administering the wells according to the Doctrine of Prior Appropriation, which has governed surface water use in Colorado since before statehood.

As Scanga mentioned, Baker was also instrumental in developing the Upper Ark district’s umbrella augmentation plan, which provides access to water resources for Upper Arkansas Valley residents and businesses that otherwise could not afford to use the water.