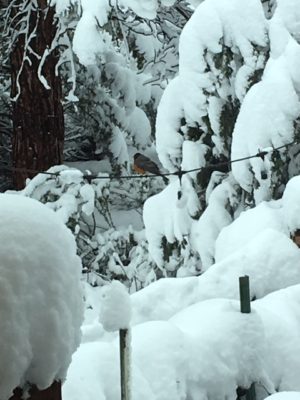 This robin appears to be a bit startled by the snowstorm that has blanketed the area in as much as 15 inches of heavy wet snow, leaving large portions of five counties without power.

A large swath of five central Colorado counties remains without electricity Thursday as a major late spring snowstorm enveloped the area. By this morning some areas of western and northern Chaffee County had already received a foot of snow, with some areas reporting 15 inches of snow, with heavy, wet snow continuing to fall in many areas. The power outage is widespread: affecting large portions of Chaffee County, the southern half of Lake County, as well as portions of Custer, Fremont and some of Saguache County.

“The outage is wide-spread throughout the system,” said Sangre de Cristo Electric Association CEO Paul Erickson, speaking from what is called the “war room” at Sangre de Cristo headquarters in Buena Vista. “We’ve had crews working all night. Every available line worker and technician is out.”

“This is an all-hands-on-deck situation,” said Erickson. “In addition to regular line crews, we have a lot of people in our staff helping, who had been certified line workers in the past. We’ve put folks out on patrol ahead of the line crews, identifying where poles are down or trees are on power lines. We’re leveraging them to get ahead of the line crews that way. It’s a form of triage – poles down with live wires, or where trees are on lines, these are a high priority. In some areas with the weight on the lines, safety technology has shut off the fuses so they have to be reset.” 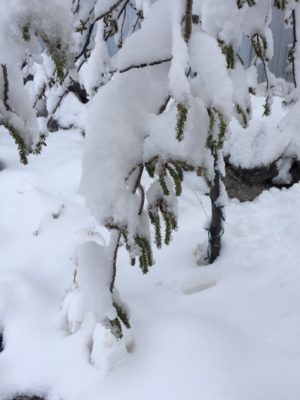 The heavy, wet snowstorm which moved in Wednesday morning has added yet another punch to a winter season that has held near record snowfall. Sangre de Cristo serves more than 13,000 customers on homes and ranches. Erickson said as of 11:30 a.m. Thursday morning, one-third of their system – 4,889 customers – were without power.

Erickson said that every available staffer is on the job. He has 20 line people working in two-man crews in this part of their service area and another six in two-person crews out of the Westcliffe area. Another 10 staffers are manning the phones, taking reports of outages, while other staffers are patrolling. He explained that as outages are called in, the phone numbers identify the customer and the reports feed directly into their outage management system. This smart grid has predictive software that ‘talks’ to the phone system automatically adding the location to the outage map, allowing them to direct line crews.

Once a customer is on that outage grid, the location stays active until a technician verifies in the system the location is back online. Between the report of an outage and that moment, crews face a brutal job.

“This is the heaviest snowfall we’ve had all season,” said Erickson. “And people who move here from other parts of the country or from metro areas also don’t realize that our crews have some of the toughest terrain in the country. Another thing most don’t know about rural electric grids such as ours, is that at any given time our system is working at 99.999 percent capacity – the entire system is being used. When you add a storm like this, well – it’s historic. In the past 15 years, we’ve only had two other storms of this magnitude. 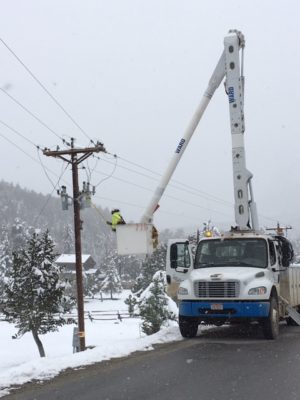 While customers who have never lived in rural areas might be impatient, Erickson said crews are working in extraordinary circumstances. “I’m expecting a briefing early this afternoon from our crews. All I can say is we hope to have it all back on today, but we can’t guarantee that. The heavy wet snow on power lines continues to blow fuses, so our safety equipment is shutting down some areas for safety reasons – and each one has to be inspected to clear those lines.”

He stressed that customers are vitally important to the electric cooperative, but so is the safety of the line crews.

“When you’ve got 1,500 pounds of snow and tree branches on a line, removing that is dangerous. It could fall on a lineman and kill him, so safety is critical. It’s hard to keep crews working all night. As management, I want to keep our people safe, but in storms like this that are progressive, you have to be out there,” said Erickson.