Late to the trough: Living with junior water rights, drought, lemonade and guns 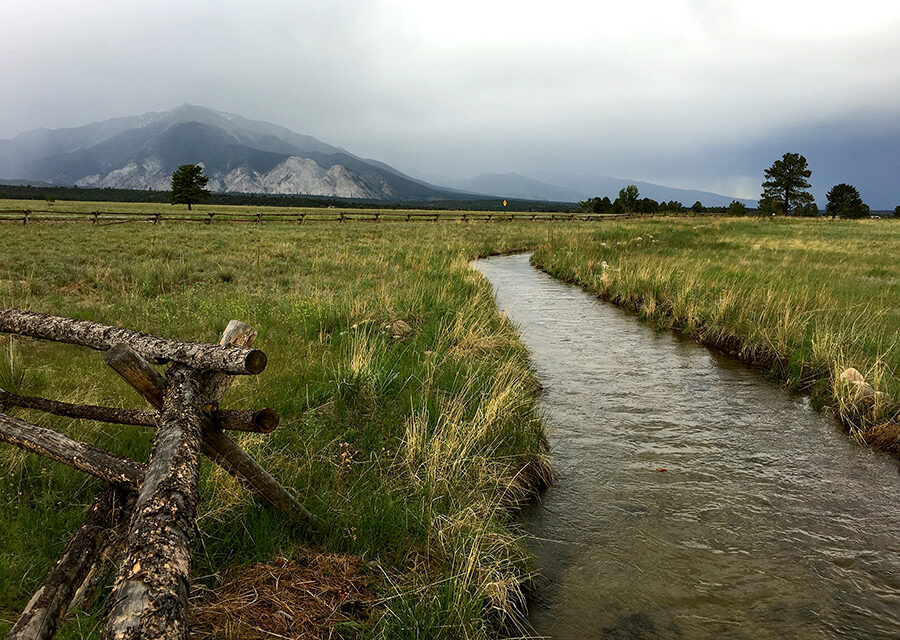 An essay as part of the ongoing series, “The Power of Water”

In a perfect world, nobody would need to care about prior appropriation.

It means this. The date on your water rights has everything to do with getting water on your fields and how long you are able to use it. Unlike birth certificates and things stored in your refrigerator, the earlier your date, the better.

The first-in-time, first-in-right dictum exists almost anywhere water is bought or sold, brawled or spat over, from Roman Polanski’s Chinatown to the current water crisis facing the American West and the boxes of yellowed papers for the Bowen Ditch Company that sit under my desk. The threadbare stock ledger details the juggling of the Company’s 16 shares since its incorporation in 1944.

Eight men, including namesake Joseph Bowen, claimed the ditch with the State Engineer of Colorado in 1888. In a perfect world, that so-called priority date would have been several years sooner; the majority of local ditches beat us to the table and today they get their water earlier and longer. The 20-year drought and aridification have made that pecking order all the more apparent.

The Bowen has rights to 44.5 cubic feet per second as it arrives through the headgate on Chalk Creek, a tributary of the Arkansas River. Jim McConaghy, a local water engineer and Bowen shareholder with a propensity for storing vast amounts of hydrological data in his head, tells me that amounts to 88 acre-feet a day, or an average of 2,000 in a season, including the drier ones.

Some years the Bowen doesn’t run.

With its origins in the Collegiate Peaks up past the ghost town of St. Elmo, the relatively long ditch flows 16 miles out of Chalk Creek, east across U.S. Highway 285 and toward the Arkansas River in the general vicinity between Centerville and Hecla Junction. Thirteen people own shares; just two, maybe three of them actively ranch these days, using the ditch for hay and cattle.

I am one of those 13 but not among the three, having bought our property when we moved from Summit County in 2016. I am also the secretary of the 133-year-old company – an elected position I didn’t need to hire campaign advisors or kiss babies to win, but rather inherited (along with the Bowen Ditch coffee percolator) when we hosted the company’s annual meeting in our living room in 2019. Most of the folks in the room had held ditch office in some form over the years, and I knew there might be stinkeye sent in my direction if I weaseled out.

Fact is, I’ve come to enjoy the volunteer gig. There is that evening, usually in early June, when the headgate opens for the season and shareholders are slated to meet at key points along the channel, waiting for the initial flow – an otherworldly, opaque goop with an overabundance of pinecones and needles – to crawl in our direction. As it nears, the two-foot-deep, brown mass sounds like paper crumpling.

Using pitchforks and wearing knee-high rubber boots that in my case are seldom tall enough, we usher the snaking debris, pulling out sticks and anything else that might lodge crossways in a culvert, cause a clog and eventually cause hell to break loose. We have a few places along the route to run the accumulated debris out to the side.

It can take up to two days for the gunk to run its course through the ditch and for the fast, clear water to flow.

During this time, property owners have been known to bring out lemonade and sweet words of thanks for our role in helping keep Chaffee County green. They like its ambiance, perhaps its ties to the past. But in the course of opening and maintaining the ditch, some of my fellow shareholders have been greeted with threats of being shot, even though Colorado law clearly stipulates that landowners must give access for operating ditches and not alter, impede or otherwise mess with them.

Not all property owners know this, or care to play by the rules when they do know.

They’ve diverted the Bowen for private swimming holes and have built footbridges that choke the ditch with debris when the water is high. People have stuffed mattresses in culverts; whether anyone has slept there is another situation altogether. There was also a bulldozing incident, the details of which sit with the Chaffee County Sheriff’s Office.

There is name-calling, middle-finger gesturing and an occasional slur toward the Bowen itself. “Your ditch is disgusting,” a woman told me two years ago as I walked past her house, American Gothic pitchfork in hand.

As this kind of conflict increases with the local surge in population and tourism, the Bowen Ditch is a microcosm of the agricultural scene in many pockets of the West. Chaffee County has seen more than 30 percent of its agricultural land disappear since 1982. Ranchers say the hassles with uninformed new residents and tourists are part of the reason they get tired. Gates are left open, people complain about cattle. Ditches are a major effort even when nobody’s giving you grief about them, and ranchers here are getting old.

In the case of the Bowen, the water greens up a big section of land alongside the Collegiate Peaks Scenic Byway on Highway 285. It still helps grow hay and cattle. But many of the shareholders aren’t what you’d call ranchers.

Tom McConaghy, the son of Jim McConaghy and president of the Bowen Ditch Company, remains mildly fascinated by this lopsided representation on the ditch. “It used to be people were depending on the ditch for income,” he says. “People work it now and they’re not making a living off of it. People do it almost as a hobby.”

Shareholders (or their proxies) spend six to eight hours clearing each mile of the ditch every spring – even if the ditch isn’t likely to run. There are saplings popping up in the channel that need to be lopped, or saplings that were overlooked a year ago and which now require a chainsaw. We collect various plastic bags, tree branches and any number of things that can block the ditch when it is opened. The tumbleweeds that accumulate in the stretch through the Chaffee County Landfill are often six feet deep.

And there are rocks. Rocks that weren’t there a year ago and whose removal requires crowbars and a couple-three strong backs. That, or a large piece of machinery. You can’t very well operate a ditch if you don’t have someone in your membership who can run all kinds of earth-moving equipment and do it at a moment’s notice. We’ve been lucky in that regard.

Perhaps a metaphor for agriculture in general, there’s a Volkswagen-sized rock that looms above the Bowen mid-course, and some of us shareholders wonder what we’re going to do when that thing finally comes down. There are ample items regarding the Bowen’s long-term sustainability that can keep us awake at night, including the aging of the ditch membership and the very physical tasks required.

Jim McConaghy remembers when eight to 10 pickup trucks would be parked alongside the ditch for cleaning, opening and other projects. Now it’s two or three trucks; a lot of tasks just don’t get done as thoroughly as they used to.

There’s also the matter of finances. The Bowen Ditch received a $42,500 Common Ground grant this year, enabling us to replace the worn-out headgate and other pieces of rotting infrastructure that could not have seen another year of operation without costly intervention. The grant was possible because local voters approved a sales-tax increase in 2018 that funnels money into forest health, the effects of recreation, and keeping local agriculture in place.

I ask Tom where we’d be without that infusion.

Oh, and the drought. The McConaghy’s look at the current situation as part of a long pattern that will eventually turn around, but they point out that the Bowen is now more likely to see abbreviated seasons, or in some cases, not run at all. There are handed-down stories about the ditch running all summer decades ago, but in more recent history the Bowen fell into a pattern where it ran three out of four years. Since 2000, it has experienced short or nonexistent seasons in one out of three years.

Long-term sustainability isn’t something we care to talk about every day because there just aren’t any easy answers. The grant has given us hope, but it can’t give us younger backs, an easier climate or an earlier priority date.

As for the future, I think it’ll all boil down to tenacity and people keeping the ditch going because they think keeping water in Chaffee County is the right thing to do. Most shareholders I talk to would not sell their water to outside interests, but as they say, water flows toward money. Pueblo West Metropolitan District, for example, purchased Bowen Water in 2008 from the Hill Ranch in Nathrop. The district purchased rights from six ditches totaling nearly 1,900 acre-feet.

The older McConaghy says there will only be more temptation in rural areas as Colorado’s population continues to explode. Water prices in the state’s metro areas have increased eightfold over the past decade.

“It’s people on the Front Range trying to get water, in my opinion,” he says.