“We are journalists, and our mission is clear – to distinguish between facts and fiction.”

This morning both The Washington Post and The New York Times (NYT) reported that Novaya Gazeta, the Russian newspaper that helped define fearless journalism in the post-Soviet era in Russia, and whose editor shared the Nobel Peace Prize last year, suspended publication on Monday. This leaves Russia without any major media outlets critical of the Kremlin as it wages what the world recognizes as a brutal and unprovoked war against Ukraine.

The newspaper (whose name means the new gazette), is led by Editor-in-Chief Dmitri A. Muratov. Muratov co-founded the pro-democracy newspaper Novaya Gazeta in 1993 with several other journalists. 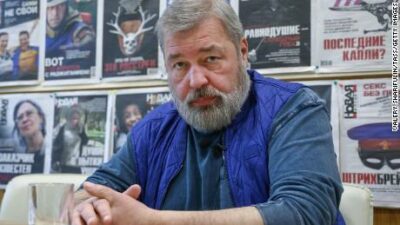 He announced that it would cease publishing in print and online until the end of the fighting — or what it called, in keeping with Russia’s new wartime censorship law, “the special operation on the territory of Ukraine.”

Last year he was awarded the 2021 Nobel Peace Prize jointly with Maria Ressa for “their efforts to safeguard freedom of expression, which is a precondition for democracy and lasting peace.”

The newsroom will remain, says Muratov, it will keep tabs on what is happening, but for now will publish no news.  For how long, he can’t say. Earlier on Monday, the paper, which was published in print and digitally, received a second warning from Russia’s telecommunications regulator that threatened to shut it down or revoke its license. Unspoken is what could happen to the journalists themselves if they continue to publish the truth about the war in Ukraine.

“We kept working until the last possible second,” said Muratov in a phone interview with the NYT.  “The newsroom will remain, we’re not going anywhere, and we will think about what new products we can make and will think about ways to return to our audience.”

Hundreds of independent journalists have left Russia since it began the war in Ukraine. Putin has placed a 15-year prison term on anyone departing from the Kremlin-controlled narrative of the war as a necessary “special military operation.”  This past weekend, Muratov was part of a press interview with Ukrainian President Volodymyr Zelensky, but under threat from the Kremlin, backed off publishing a story about the interview.

Novaya Gazeta had tried to hold out, avoiding the use of the word “war” even as it reported frontline stories, but finally, on Monday, it made a decision. In an email to subscribers, Muratov wrote: “We are forced to suspend the publication of the newspaper and not update the website and our social networks until the end of hostilities on the territory of Ukraine. For us, and, I know, for you, this is a terrible and difficult decision. But we must preserve each other, for each other.”

News such as this makes those in this democracy grateful for the First Amendment, which ensures the freedom of the press, and freedom of speech. By understanding what news organizations go through around the world to ensure that “truth has a voice,” we hope our readers understand our own commitment to unbiased, fact-based journalism. It is not something we — or you — should take for granted.