On Thursday, the Rocky Mountain Gun Owners (RMGO) legal arm, the National Foundation for Gun Rights (NFGR), along with citizens Ben Gates and Travis Swartz filed a lawsuit against Governor Jared Polis and the State of Colorado over the state’s 2013 Standard Capacity Magazine Limit. 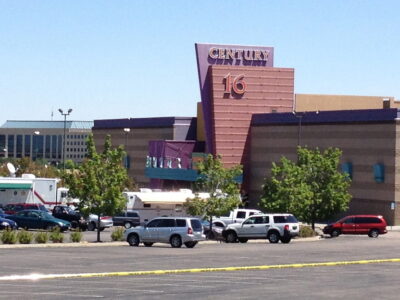 The Century 16 theater in Aurora Colorado, scene of one of the worst mass shootings in American history. Courtesy image.

The nine-year-old law outlaws the sale, transfer, and possession of magazines capable of accepting more than 15 rounds in Colorado.

Many would say the state’s commonsense approach to limiting high-capacity magazines is a sane move in a state that has seen more than its share of mass gun violence deaths; from the Columbine school shootings in 1999 to the Aroura Theater shooting in 2012.

But it appears that Rocky Mountain Gun Owners and the National Foundation for Gun Rights think otherwise. In their announcement, they confirm their challenge to Colorado law will be solely financed by the two organizations.  The RMGO was founded in 1996 after the National Rifle Association made gun rights a Republican platform item.

The bill they are challenging was passed after the July 20, 2012, mass shooting inside a Century 16 movie theater in Aurora, Colorado, during a 12:00 midnight screening of the film The Dark Knight Rises. The shooter, dressed in tactical clothing, set off tear gas grenades and shot into the audience with multiple firearms. Twelve people were killed and 70 others were injured, 58 of them from gunfire.

It was the deadliest shooting in the state since the Columbine High School massacre in 1999. It was the largest number of victims (82) in one shooting in modern U.S. history until the 107 victims of the 2016 Orlando nightclub shooting.

When Americans are asked the question of whether they are in favor of stricter gun laws, the overwhelming response in poll after poll is that more than 60 percent of Americans want stricter gun laws. That percentage has been growing year after year, as mass murders in schools, shopping centers, grocery stores, movie theaters,  concerts, and most recently targeted at home-town parades — have grown.

A recent CBS Poll also shows that beliefs regarding such laws differed across party affiliations. Some 79 percent of Democrats surveyed favored stricter gun sale laws, compared to 27 percent of Republicans and 50 percent of independents.

The RMGO vision is the Wild West

Despite the carnage, and regardless of the fact that a majority of Americans want gun laws that outlaw high-capacity magazines and military-style weaponry such as AR-15s, there could be a strategic reason that RMGO is challenging the state.

Their lawsuit is designed to challenge the law’s constitutionality in light of the recent Supreme Court decision NYSRPA v. Bruen, possibly to raise the case as far as the U.S. Supreme Court.

In that case, the New York State Rifle & Pistol Association (NYSRPA) challenged the Superintendent of New York State Police. In an opinion by Justice Clarence Thomas, the Supreme Court interpreted the Second Amendment right to “keep and bear arms” as including a broad right to carry a handgun in public for self-defense.

RMGO is also currently suing the Town of Superior, Colorado over their magazine and semi-automatic rifle ban and was recently granted a temporary restraining order (TRO) that blocks the town from enforcing its anti-gun ordinances.

“The early wins in Superior are a telltale sign of what is to come not only in Colorado but around the entire country,” said Taylor Rhodes, Executive Director of Rocky Mountain Gun Owners. “… Come hell or high water, we will restore the Second Amendment in Colorado through the courts and by repealing laws through the legislative process.”

In last month’s landmark Bruen decision, the U.S. Supreme Court rejected “intermediate scrutiny” – the cost/benefit analysis framework that allowed lower courts to rule against the Second Amendment – and established that the standard for applying the Second Amendment is the text, history, and tradition of the right to keep and bear arms; thereby, invalidating the lower court rulings’ justification for gun control.

The RMGO lawsuit, argues that Colorado’s prohibition on Standard Capacity Magazines (over 15 rounds) flies in the face of the Second Amendment because “law-abiding Coloradans who wish to possess these commonly-owned firearm accessories should be allowed to do so.”

They make no mention of the rights of those who happen to be the target of this weaponry and “firearm accessories.”

Well, that is a single-minded focus.

It should be pointed out that Second Amendment rights are very secure in Colorado, and the law being challenged has stood since 2013. Readers may also recall that since 2021, Colorado red-flag laws have offered temporary protection from gun owners who may be a danger to themselves or others during mental health crises.

Ark Valley Voice has no information as to the identity of Ben Gates (no, not of the “National Treasure” film) or Travis Swartz. There has as yet been no comment from the governor’s office regarding the lawsuit.