Letter to the Editor: America is under attack

Trump and the Republicans in Congress are attacking America. The platform of the Republican Party has always been to cut taxes for the One Percent and the big corporations and to reduce the footprint of the federal government on the people and businesses.

Trump is a bully, liar, white supremacist, elitist, racist, narcissistic sexist and a sexual predator who should be required to register as a sexual offender. Trump is trying to destroy the First Amendment, including a free press and freedom of speech. (He considers) All news is fake news except Fox News, which is a propaganda outlet for the National Rifle Association and Republicans.

He has attacked The Wall Street Journal, The Washington Post and The New York Times and the journalist that wrote the story. He has attacked all TV journalists. Some guy named Sinclair owns a number of TV stations throughout the United States and recently required all of his news hosts to read from a script. They cannot report their own news; they have to follow the owner’s script.

In addition to the Second Amendment, maybe Trump and the Republicans need to read and respect the First Amendment. If Trump slams Morning Joe one more time, they should order one of those nutrition meals for him and recommend a good doctor that does tummy tucks.

I thought that Rex Tillerson was one of Trump’s best appointments, but before he was sworn in Trump fired the top five people in the State Department. These people would have been able to help Tillerson get his feet on the ground in diplomacy. Trump continually cut Tillerson out of the loop, and a lot of positions remain unfilled in the department. The State Department has been gutted, and it will take a decade to get it back to full strength when Trump leaves.

Jeff Sessions as attorney general has a tough skin. No one deserves the verbal abuse heaped on him by Trump. Trump appointed him to stop the Russian investigation, but Sessions recused himself. As a lawyer he had to. He was a part of the campaign, the transition team and had talked to the Russian ambassador. He could possibly be on the radar of the special prosecutor. As a lawyer he was required to recuse himself. I disagree with Trump and Sessions on a number of things, but let me just discuss one.

Trump wants to give drug dealers the death penalty, and Sessions wants to put all users in jail. Throughout the United States there are community sentencing programs that are a year long. People in these programs are on the outside, required to have a job, attend AA meetings, subject to drug tests, attend counseling sessions on a weekly basis and appear in court at least once a month.

If they bust a rule, the court can put them in jail for a short period of time. If the people cannot follow the rules of community sentencing, they are sent to a year-long program where they work, attend AA meetings and group sessions. It is less expensive to have users and alcoholics in a program outside of jail than send them to the penitentiary.

If they still can’t remain sober on the outside and are sent to prison, there are some excellent programs in the penitentiary. The death penalty is not a good idea, and putting everyone in jail at government expense is not good when they could be on the outside in a year-long program. The 30-day programs that are out there do not work for most people and are a band-aid for recovery.

Trump has left the secretary of defense alone, which is good. Trump has no military background, and hopefully he will listen to his military leaders.

The Secretary of Education, DeVos, is a sad case. She knows nothing about public education, and as I understand it, is against public education. A journal asked her why she didn’t go out and visit some of the under-performing schools. “Good idea,” Vos replied.

The woman has no idea what she is supposed to be doing. She and Kellyanne Conway make a good pair. They can both talk for an hour and not say anything. Here’s a suggestion. Go out to the states with under-performing schools and ask the state secretary of education, “How we help?” At the same time, send your staff out to talk to the superintendents and principals of schools and ask the same question. Then follow through with some action.

The head of the Environmental Protection Agency is doing a great job for the Trump program by repealing all of the rules and regulations that protect our environment. He has a long list of ethical violations that make him the top alligator in the swamp. He needs to go back to Oklahoma and stay. His soundproof telephone booths can be used by Trump when he wants to talk on his cell phone. There is a long list of where he has abused the use of the taxpayers’ money.

The Secretary of the Treasury is another great guy. He cheated people on their mortgage while in the banking business. Said “I’m sorry I did that” and Trump appoints him to repeal all of the regulations that protect the people. Most bankers follow the regulations and treat their customers fairly. However, there  are a few of the big banks that need some rules to keep them honest. Wells Fargo just got hit with a billion dollar fine.

Trump’s appointment to the Consumer Protection Agency called the agency a sad group. I would bet that his job is to repeal all of the regulations that protect the consumer and gut the agency.

It is one thing to reduce the footprint of Government but quite another to cut the foot off.

Trump, get off of Twitter. Here is an idea. Call in the Secretary of State and tell him you want a short-term and long-term policy statement and the reasons for the policy. Be prepared to brief me on the hot spots around the globe and a written statement for my staff to read. A fully staffed State Department can do this for you. Call in the Secretary of State and ask for the same information for the military.

It looks like it will be tough to get a Secretary for the VA. Sad day for the veterans of our country.

I hate to tell you this, Trump, but you are not the smartest guy in the room. Get some help and listen to their advice. Trump was going to drain the swamp, instead he has filled it with alligators and snakes.

A word to my Republican friend. Put on your life jacket. The blue wave is offshore and headed for the beach. 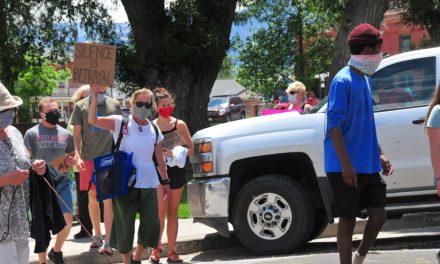 Letter to the Editor: Granzella silent on sexual harassment

Letter to the Editor: Nestlé Waters North America has been sold