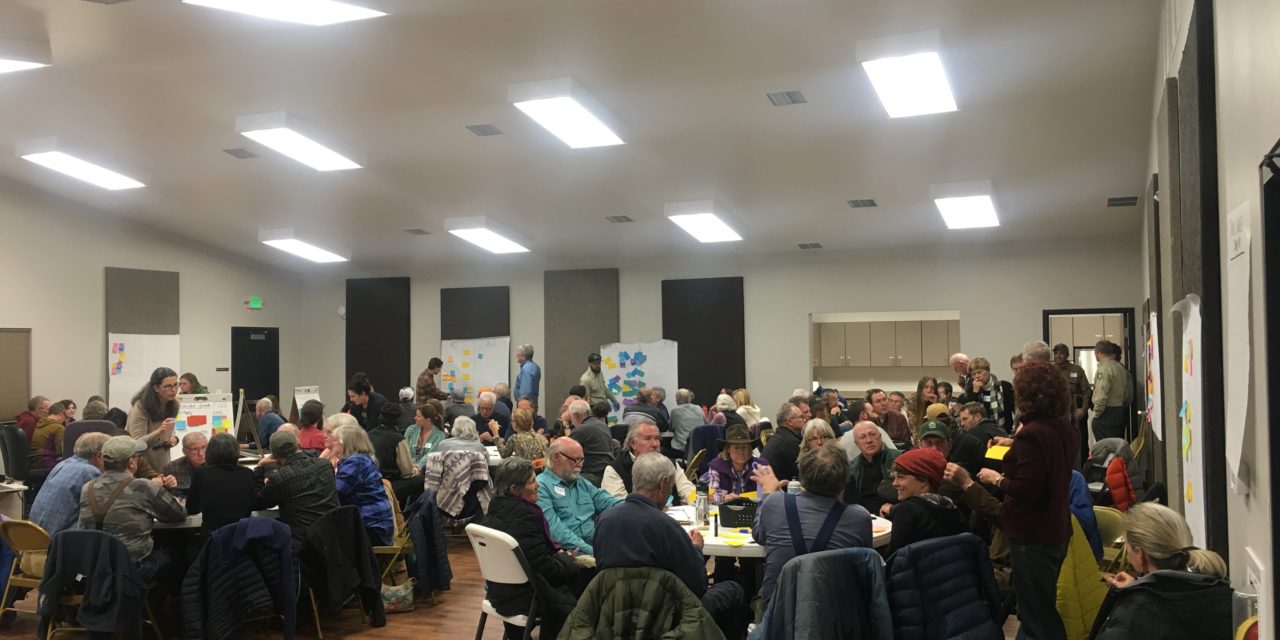 Envision Chaffee is asking citizens to submit comments before June 20 on the Chaffee County Draft Recreation Plan that they have prepared. I would strongly recommend that readers visit this site to read the draft Plan and post comments to make their own views known.

In this letter I have summarized some deep concerns that I have on the draft Recreation Plan regarding serious flaws in the analysis, the method that data was collected and presented, and the evident bias in the preparation and presentation of what should have been an independent assessment of the wishes of citizens on recreation in Chaffee County. 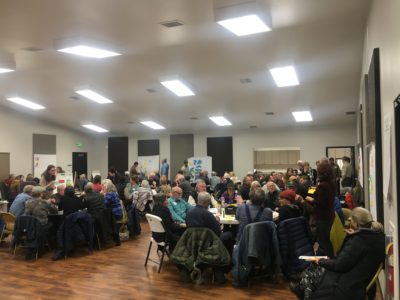 An enthusiastic crowd of around 100 people showed up for the Recreation in Balance gathering Feb. 6, 2019. Photos by Henry DeKam.

When the Chaffee County Recreation survey was released last year I was one of the 1,381 respondents from Chaffee County. I was shocked at the time by what I perceive to be the lack of professionalism in the preparation of the survey and by the obvious bias in the questions. The title of the email that contained the survey was “Are You Concerned about Recreation Growth?”

A majority of the questions were about outdoor recreation in general and led the survey participant to think about the worst – dispersed camping, trash and human waste. However, the survey had relatively few specific questions about specific forms of outdoor recreation and their value and importance. Very little data about our trail systems, our users, and the value to our community were gathered which, given the economic benefit recreation brings to the valley, highlighted the deeply flawed and biased nature of this survey.

An objective of the plan is to “Cut dispersed camping impact by half.” This recommendation in the “Recreational Plan” neglects to address that, because of the lack of affordable housing and the limited availability of developed campsites in the County, many seasonal employees of the local summer economy are forced to live on public lands during the summer months.

Public Land camping has become the go-to for cheap housing within proximity to businesses, municipalities, and recreation areas. Envision Chaffee themselves reported in 2018 that “by far the top concern expressed by the 1,200 community members that participated in the Envision Chaffee Survey was the affordability of housing relative to local wages”.

It should be noted that the Chaffee County Commissioners rejected the Agastache Village Tiny Home/RV Park application, a development designed to give affordable housing options, based on local resident complaints. If you agree that the County Commissioners should identify where exactly these developed campsite alternatives will be located before taking any steps to advocate curtailing access to campsites on public lands for their citizens who have no other housing options, please post this as a comment here.

Many other local groups that represent long-term recreational users in Chaffee County have also raised serious concerns about the Recreational Plan. Salida Mountain Trails raised concerns on the emphasis in the plan on the relationship of recreation in general and its effects on wildlife. I should point out that while the Rec Plan asserts that Colorado Parks and Wildlife (CPW) “studies show that recreation activities displace wildlife”, they provide no reference to this study. Moreover, CPW already has a rigorous and effective process for managing critical wildlife, assessing recreational impacts, and managing seasonal closures.

I believe it is highly inappropriate that the Rec Plan recommends that Chaffee County assert itself into that process, highlighting the flaws in this process by assigning responsibility for the generation of this plan to a third Party special interest group, Envision, in the first place.

For more details on other possibly serious flaws in this Rec Plan highlighted by multi-generational Chaffee County residents and long-term advocates for keeping public lands open to the public, I would recommend reading these comments and also watching this informative video. If you concur that wildlife impact management should continue to be handled by USFS, BLM and CPW and that Chaffee County should not insert itself into the traffic management process for public lands, then submit a comment here.

Make comments and opinions on the Draft Rec Plan known to the Chaffee County Commissioners as well as posting on the Envision comments page. For myself, I think this complete Rec Plan draft needs to be scrapped and the planning process should be started over by a different organization than Envision, whose close (some might say incestuous) relationship with the Chaffee County Commissioners and Common Ground Advisory Council raises questions on the evident bias in the survey used to collect input from citizens and the agenda of the Envision Recreation in Balance program which was funded to prepare this Plan.

I also think that a public meeting is needed to receive comments in person on the draft Rec Plan and that hard questions also need to be asked to our County Commissioners regarding how our tax money has been spent in this process.

For example (i) Was there a competitive bid process for preparation of this Rec Plan? (ii) How is Conflict of Interest being handled between members of the Envision Chaffee Board and the Common Ground Advisory Committee and the Chaffee County Commissioners? (iii) Did Envision Chaffee board members and Commissioner Greg Felt recuse themselves from the decision to grant taxpayer funding to Envision Chaffee? (iv) Why were long-term local and national recreational organizations with significant representation in Chaffee not included in the development of this Rec Plan?

Editor’s Note: Dr. Alison Brown is a principal shareholder of Ark Valley Voice LLC. She has no editorial control.