Having recently seen signs and other promotional information for Hannah Hannah running for County Commissioner I decided to distract myself from our divisive national politics with a good look at our local political landscape.  I must say I was sorely disappointed.

Hannah Hannah circulated a poster of herself standing in front of an incorrectly hung American Flag holding a firearm with a second gun in a holster on her hip. 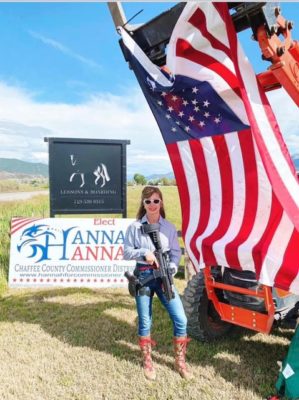 Hannah Hannah Facebook photo. The photo has since been removed.

The firearms clearly indicate her position on the Second Amendment and if I remotely thought anyone in our county was suggesting an assault on gun rights here, she should get their vote.

The truth is there is little threat to gun rights on a county level, but there certainly are a number of other high priority issues facing us, especially in the midst of a pandemic.

The other noticeable point to be taken from the posed photo was her red boot laces laced in ladder fashion rather than the traditional X pattern most of us use.  The boots and red laces in ladder fashion are an insignia of white Supremacist groups and in my opinion, have no place here in Chaffee County.

Further research on her own Hannah for Commissioner Facebook page lists her experience as professional mountain bike racer and extreme skier, fashion and jewelry designer, and a reference to some real estate work.  She states she has been in the county for just two years.  Nothing on her own pages indicates she has ever owned a business in Chaffee County nor run one.

Nothing on her page indicates she has ever worked on public policy or done any sort of public service work; no indication she ever managed a large complex budget or supervised any employees.  No indication she is aware of what the County Commissioner’s job entails.

Compare this to the three existing commissioners — all of them had owned Chaffee County businesses, lived here for years learning the issues, and spent years in public service.

Greg Felt has a lifetime of water public policy advocacy.

Keith Baker was a BV Town Trustee and mayor pro-tem, executive director of Friends of Browns Canyon, all after a career as a Navy Commander, including a Pentagon posting.

I appreciate Hannah’s effort to throw her hat in the ring for a job that pays nearly $75,000 per year, but if she wants to contribute to Chaffee County she should be spending hours and years at no-pay volunteer positions learning what public policy and public service is all about, rather than attempting to start in a very critical decision making position for which she has no qualifications.

Chaffee County Commissioners oversee a 32 million dollar budget and 290 employees and need to be well informed on everything from wildland fires to road construction to zoning regulations and much much more.

In my opinion, Hannah Hannah is woefully unqualified for the job she is seeking and I find it insulting that she is asking us to put her in charge of our future when she apparently has so little relevant experience.

Editor’s note: Letters to the Editor sent to Ark Valley Voice are required to supply claim substantiation; listed below for this letter.

Clarification of U.S. flag Etiquette, the U.S. rules, and regulations for displaying a flag with her violations highlighted in red:

The accompanying photo was on the Hannah for Commissioner Facebook page and Dubin says that it has  recently been removed.