Salida Mountain Trails (SMT) respectfully disputes the remarks by County Commissioner Greg Felt in a recent op-ed that SMT, “has been disingenuous…and has contributed to the public’s confusion” regarding the new Chaffee Recreation Plan.

As we have often stated, SMT fully supports many of the recreation plan’s goals. We applaud much-needed efforts around wildfire mitigation, dispersed camping, and recreation-related infrastructure. However, SMT is one of several parties—including Monarch Mountain, Poncha Springs city government, Central Colorado Mountain Riders, local businesses, and more—who are concerned the plan’s Community Concentration Zones as detailed in the wildlife section of the recreation plan are too small and restrictive. 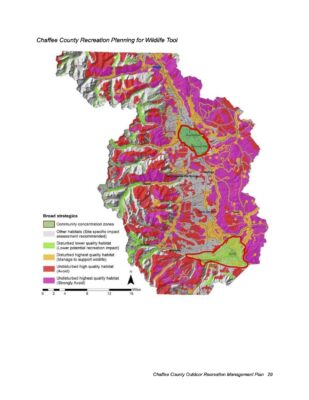 These Community Concentration Zones (see page 29 of the rec plan) are intended to focus recreation—and recreation funding—in specific areas close to towns. That’s something we do support, to ensure a connected vs. sprawling trail network. What we don’t support is the plan’s stated intention to largely “discourage new recreation” outside these small zones.

Only about five percent of the vast public lands of Chaffee County are within these zones. None of it is Forest Service public land; only BLM. Tightly bordering the city limits of Salida, BV and Poncha Springs, the zones do not even include the entire existing footprints of the Salida or BV mountain biking and hiking trail systems. The zone in Poncha includes no available public lands south of town for a future trail connecting that town to Salida via the Methodist Mountain Trail System, which is a stated goal of Poncha Springs’ city government.

Outside these zones, the rec plan characterizes a vast majority of all other public land as “high” or “highest” quality wildlife habitat, and calls to “discourage new recreation development”. The plan does not detail what “discourage” means, nor does it distinguish between different types of recreation. Primary contributors to the wildlife section, maps, and zones of the rec plan are listed as Quiet Use Coalition and CPW wildlife biologists. The results, in our opinion, greatly prioritize hunting over all other forms of outdoor recreation. Hunting is currently allowed on around 90 percent of all public lands in Chaffee County. There is nothing in the rec plan that discourages hunting or details its effects on wildlife.

The planning effort for this rec plan began with the tag line of “Recreation in Balance”. We contend that recommending no new recreation on approximately 90 percent of all public lands in Chaffee County is not balance. Conversely, we also support reasonable limits which we agree to be very valuable and necessary.

More broadly, SMT feels the existing federal process for trail approval already thoroughly takes into account wildlife concerns balanced with all other factors. This process for any new trail approval takes years of work; considering not only wildlife, but cultural, environmental, and economic impacts as well—a true balance.

Even before preparing a trail proposal, there is extensive coordination with CPW wildlife resources as well as BLM or Forest Service wildlife experts. There are then two rounds of public comment, and an eventual decision that may or may not grant approval. If “discourage new recreation” just means stating that position during the public comment periods, then we welcome and accept that. But there is also a stated objective of “actively participating in management.”

What does this mean?

SMT has been consistent in voicing our issues with the “Community Concentration Zones” to the recreation plan leadership team. We contend that we have not been disingenuous, nor have we contributed to confusion, or spread misinformation.

We simply ask that the county commissioners direct the recreation plan leadership team to reopen this part of the plan for further review and revision, to allow for balance that we feel more broadly reflects the sentiments of the greater community. In our opinion, this will result in increased support and greater long-term success of the plan.

SMT is proud of the working relationship we’ve developed over the years with our county commissioners. Together, we’ve collaborated on several great projects for the community: Trailhead parking lots, support for major grants, improved access/safety for users to trailheads on county roads. We look forward to continuing our mutual work to benefit the community, and we see many opportunities in the rec plan to do just that.