Letter to the Editor: The Benefits and Protections from Nestle Outweigh the Concerns

As a river outfitter for 25 years and a Trout Unlimited (TU) member, I have worked with Nestlé Waters North America, Inc. prior to their 1041 permit because we had concerns about depletion of the quantity and quality of water. I listened to the six-hour hearing Tuesday and my husband [Reed Dil] listened Thursday.

As he said, “Next to Terry Scanga and Greg Felt, I probably know more about water than most anybody in the county, having been on the Colorado Water Conservation Board, Southeast Water Conservancy District board, Arkansas Basin Roundtable and currently serve on the Buena Vista Water Board.” 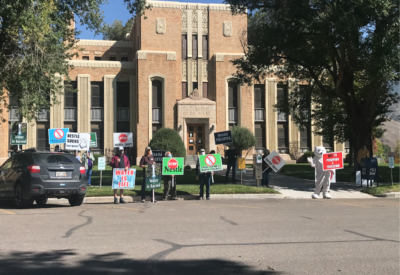 Protestors in front of the Chaffee Administration Building protest renewal of the Nestle 1041 permit. hoto by Brooke Gilmore.

I applaud the research Tom Bomer and Jennifer Swacina did. Their emphasis was on how poorly the previous county commissioners did the agreement rather than about Nestlé. Most people objecting on the Zoom calls didn’t understand water law and what the commissioners can legally do.

I’ve met with every manager they have had and toured the site as a representative of TU, who has submitted a letter of support with conditions similar to GARNA’s. However, I am speaking on my own now.

This land was previously privately owned as a fish hatchery. The fish were artificially fed and the return water contained excess nutrients and fish excrement. They packaged their fish in plastic.

As for benefits to the county:

Nestlé has community-giving in its budget and has never turned down a local request. I do not consider their investments in our community “token.” Donations are larger than any business has ever given.

There have been NO losses to Chaffee County, no evidence of increased plastics due to Nestlé’s presence.

The conservation easement has been worked on since BEFORE the permit. Just ask the Conservancy district or Cattleman’s Association how long it can take to put an easement in place.

As for sustainability, our local breweries use water that is NOT replaced through augmentation and produce a variety of beers, just like water, and transfer it to Denver.

There is a market for spring water in addition to purified water. If Arrowhead Water didn’t exist, consumers would purchase another brand. If we stop buying bottled water, Nestlé won’t reach its maximum capacity.

The county has in place language that requires any transfer of the permit to abide by the conditions of Nestlé ’s permit. Should this permit be denied:

As for the need for Nestlé:

Most companies, governments, and people make mistakes, but progress is learning from them and moving forward. We should do our individual part rather than focusing on one corporation. This permit has little to do with plastic and according to the county attorney, Nestlé has fulfilled permit conditions and deserves renewal.