Letter to the Editor: The Community Has Spoken on Nestle 1041 Permit: No Renewal

After multiple hearings, much testimony, technical jargon, and hyperbole about whether the 1041 permit for Nestlé Waters North America should be extended another 10 years, decision time is here for Chaffee County.

Commissioners have heard from multiple organizations and individuals on their concerns over the pumping of water from the Ruby Mountain Springs and loading it on trucks to be driven to Denver where the water is processed and put in plastic bottles and sold as the Arrowhead brand.

Some county officials have held that the review can only consider whether Nestlé has performed in accordance with the specific provisions of the original 1041 agreement back in 2009. I strongly disagree with that contention. The decision certainly can take into account much more than the limited provisions of the 1041 pact itself.

While some assessments agree that most, but not all, of the permit water provisions have been upheld by Nestlé, there are larger questions that echo from the past decision of the former commissioners Holman, Giese and Glenn; so controversial in 2009, that speak even louder today.

I hope commissioners are listening.

Opponents, including the organizers of Unbottle and Protect Chaffee County Water, (ably represented by spokesperson Jennifer Swacina), supported by 350 Central Colorado and groups like The Story of Stuff Project, which has mounted legal battles against Nestlé ’s bottled water industry and its tactics dealing with smaller communities and their water resources, make arguments that underscore larger environmental issues.

While most of our state is literally withering under drought conditions that are unprecedented, and communities seeing historic-size wildfires that strain resources (and as we remember the Decker fire of a year ago) the most precious resource we have, water, has gained new importance.

The 2009 decision of the former commissioners has been criticized as an example of how short sighted officials can be when presented with short-term rewards by a multinational corporation that desires to profit from a created market for a product like bottled water.  The decisions of local landowners who profited from selling to Nestlé has also come under critical scrutiny, as has the role of one Planning Commission member who resigned after also serving simultaneously as a Nestlé consultant for years. 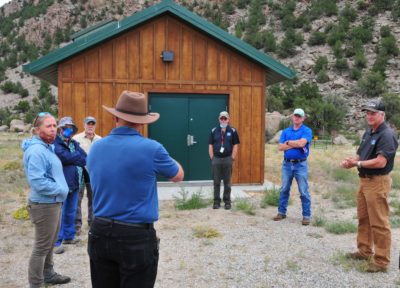 At a visit to one of the Nestlé pump houses on the Ruby Mountain Springs site in August, consultant Mike Allen (in hat) speaks about the operation to visitors from 350 Central Colorado, left, and Daniel Johansen, (with ID badge) local Load Station Manager for Nestlé; Steve Sims of the law firm Brownstein, Hyatt, Farber & Schreck, and Larry Lawrence Nestlé Waters North America Natural Resource Manager.

Those past actions, pardon the pun, are water over the dam. The future is what is important now. The health of the Ruby Springs aquifer, our local Chaffee County environment, and resources have to take precedence.

While Nestlé has demonstrated its good neighbor intentions with educational endowments to Salida and Buena Vista schools, contributions to local organizations aiding in pandemic relief, and other gestures that are very commendable, critics have said it could be providing much more in exchange for its huge profits from selling millions of gallons of bottled water from our aquifer over the past decade.

Questions about whether Nestlé Waters will be sold in the near future to another company or private equity firm are now appropriate in view of how it could negate any Nestlé promises for future community support. It raises questions of whether a less reputable entity would be more adversarial in dealing with the county.

Obviously, the impact of single-use plastic bottles on the environment, worldwide, in the U.S. and locally should not be regarded lightly.

The fact Nestlé only pumps about half of the permitted flow of up to 65 million gallons annually from the spring does not guarantee it won’t pump the full amount in the future.

Testimony that the flow taken from the aquifer is minimal compared to its measured flows seemingly ignores the threat of the deepening drought in our state and the global warming that causes it.

The perceived threat of Nestlé suing the county if this agreement is not renewed seems to ignore the county’s inherent right to decide its own future and that of its valued resources.

In our current political environment nationally, concerns over whether corporate oligarchy trumps true democratic rule are appropriate to consider.

So many citizens at these hearings have demanded the county end this relationship, correct the mistake in judgment made by commissioners more than a decade ago, and show their constituents that their concerns and the environmental health of the community hold more sway than the influence of a corporate giant.

Ten years is long enough; the 1041 permit should be allowed to expire.

Editor’s note: Dan Smith is a reporter for Ark Valley Voice covering a variety of health-related entities and the Salida Airport. This letter represents his own opinion about the Nestlé Water 1041 permit.