There’s a collaborative spirit among the leaders of the Ark Valley Libation Society. That spirit is leading their unified launch of a special product sampler, The Ark Valley Libation Drink Card, in time for the summer recreational season. It invites residents and visitors to “raise a glass to the valley that produces some of the finest libations in the country.”

The card creates a tour of the valley drink by drink, a libations loop that could be done in one day (slowly), over a weekend (leisurely), or spread across a series of weeks (savoring the experience). A shuttle arrangement called “safe transportation” is in the planning stages for this summer. 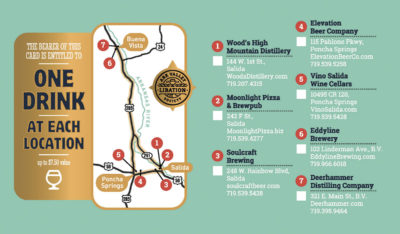 According to Elevation brand manager (and keg orator) Andy Astor, the collaboration evident in the Arkansas Valley, while unusual anywhere else, is to be expected in the Upper Arkansas River Valley. That’s because the brewers, wine-makers and spirits-producers share a common economic goal – recognizing that by helping each other to be successful, they are building the libations industry for the entire valley.

”AVLS has an economic factor,” said Astor, who serves as president of the AVLS. “We’re in this together. In fact, AVLS is the only organization of its kind anywhere! In other areas you might see the brewers get together, or the wineries get together. There’s even a distilled spirits association. But you don’t see anywhere else where all of us are working together as a libation association like we do here.”

“It’s a collaboration,” said Soulcraft Brewery marketing director Eric Ramsey. “We don’t want anyone to do badly. It would reflect on all of us. This is a community and we all know each other and help each other.”

“If Mike (Soulcraft CEO and cellar master Mike LaCroix) is out of a particular ingredient, we’ll help out, and I know he’d help us,” said Astor, who notes that Elevation now has 16 beers on tap at its on-site tasting room. “We’re a close community. The thing that people don’t realize is that on a per capita saturation, there are more of us in this small valley representing a range of brews and wines and spirits than anywhere else in Colorado.”

While some might wonder if the valley, or the state, has a saturation point, the libation leaders say no. They believe the audience will drive the industry. They also point to the robust economic activity – jobs, incomes and renown – they add to Chaffee County.

“Elevation Beer Company, being in Poncha Springs, is the cornerstone of the development of the beer industry here,” said Ramsey. “It’s the corridor between both ends of the county. First it was Elevation; then Vino Salida Wine Cellars opened. I just don’t think there is another place like this anywhere. Working together creates this atmosphere that we can all grow and experiment in. For instance, we just launched our Coconut Milk Stout. ”

“Every one of us is locally owned, and we all live and work in the Arkansas River valley,” said P.T. Wood, founder of Wood’s High Mountain Distillery in Salida. “All of us are bringing more into the valley in jobs, income and ingenuity. We’re an economic force.”

The group chuckled as they described what they call the traveling barrels experiment of producing a variety of drinks built from each other’s processes.

“We have fermented beer in barrels that began over at Vino Salida. We add the yeast for beer and the beer gains from the grape musk,” said Astor. “We set out to see if we could do what we call hybrid fermentation products. A combination of fermentation and distillation. The sweetness comes from Jamie Johnston’s honey.”

Vino Salida’s uniqueness isn’t just that it is a Colorado-based winery, the key is its base ingredient.

“Other Colorado wineries blend their wines with California grapes. We do all-Colorado craft wines,” said Shook. “People may not realize that we only use grapes that are grown in Colorado. We purchase all our grapes from Palisade and Paonia. What’s important about that is that the Grand Valley AVA, a formally-designated grape-producing area, is one of the smaller American viticulture areas of the country”( ‎Grand Valley AVA ).

We’re all prolific in trying new things,” said Wood about his name-sake distillery. “For instance, the vermouth we serve at Wood’s High Mountain Distillery in Salida is sourced from Vino Salida.”

Together, the libations society is expanding the valley’s reputation. Elevation Beer Company has expanded its export markets to Singapore and is looking at Korea and Sweden. Wood’s is in the process of setting up a tasting room (wholesalers of beer, wine and spirits have the right to set up a separate retail tasting room) at a location in Denver’s trendy River North Art District  that goes by the nickname of “RiNo.” “That’s going to take this valley’s reputation even further,” said Woods.