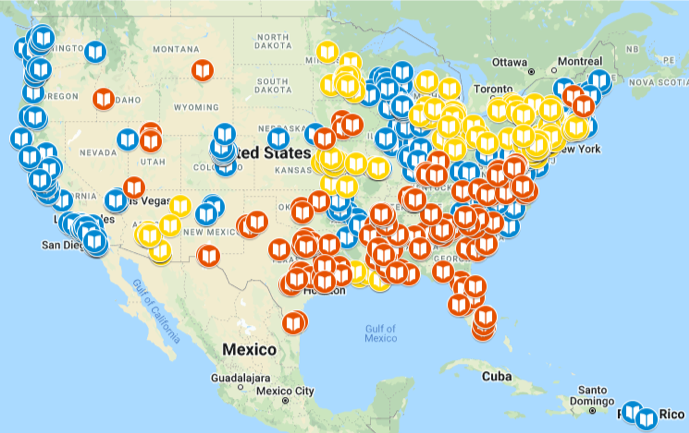 In the face of dozens of state laws restricting how race and history are taught in schools, and with books being pulled from school libraries and challenged in public libraries in record numbers, many teachers are doubling down on their commitment to teaching young people about institutionalized racism and how to organize for justice.

One example of this commitment is the overwhelming response to an offer for free copies of “The Rebellious Life of Mrs. Rosa Parks”, the young readers’ edition of a book by acclaimed historian Jeanne Theoharis, adapted by award-winning young adult author Brandy Colbert. Since April, 13,000 copies of the book have been shipped to teachers requesting copies to pair with their history or language arts curriculum.

A special emphasis has been placed on distributing copies to educators in states with laws passed or pending that would ban teaching about institutionalized racism — which Rosa Parks spent much of her life resisting.

The Zinn Education Project is coordinating the distribution, as part of its wider TeachTruth campaign, which includes a TeachTruth syllabus, a pledge, and public actions at historic sites. Other examples of resistance include student-led walkouts and the Brooklyn Public Library’s commitment to grant any teenager in the United States an e-library card to access and read books of their choosing.

The books were purchased by Lush Cosmetics following a North America Teaching Truth in History, storewide campaign in February 2022. In addition to publishing the young readers’ edition of “The Rebellious Life of Mrs. Rosa Parks” in 2021, Beacon Press is offering free shipping.

The giveaway coincides with Peacock TV’s release of a documentary film on Rosa Parks by Soledad O’Brien Productions. Based on “The Rebellious Life of Mrs. Rosa Parks”, the film premieres at the 2022 Tribeca Film Festival.

The book has won multiple awards: 2014 NAACP Image Award Winner: Outstanding Literary Work–Biography/Autobiography, the 2013 Letitia Woods Brown Award from the Association of Black Women Historians, and it was named to the Choice Top 25 Academic Titles for 2013.

The map indicates where the 13,000 books have been shipped. Red pins indicate states that have passed anti-history education laws, yellow have laws proposed, blue have either defeated laws or have none proposed, but still have communities where teaching about racism is threatened.

The featured map shows the distribution of the new Rosa Parks book, across both Democratic and Republican-controlled areas of the country. What the map cannot show is the chilling effect of the laws nationwide, that are being put in place as part of the Republican-instigated culture wars to prevent the teaching of the truth about the country’s history of institutionalized racism.

In Colorado, the book has only been distributed so far in the Front Range.

“The Rebellious Life of Mrs. Rosa Parks” shows how Parks’ life was a tapestry of resistance, including and beyond her brave act on the bus in Montgomery. In fact, Parks spent more than half her life in Detroit fighting segregation in housing, hospitals and restaurants; protesting police murders of Black teenagers; organizing against sexual violence and against apartheid in South Africa; and working for Congressman John Conyers.

Parks’ life story offers lessons for young people about a life of activism against systems of oppression, which explains why teachers are responding so enthusiastically to the offer for copies of this inspiring book. As teachers requested copies of the book for their classrooms, they shared stories about how they will be used. Here are a few of the hundreds of examples submitted.

“Thank you so much for the opportunity. I live in Texas and, as you can imagine, have experienced some pushback as far as my African American Studies curriculum is concerned. Suffice it to say, I remain undaunted. I am compelled to teach the truth and make this history come alive for my students.” — high school social studies teacher, San Antonio, Texas

“Reading ‘The Rebellious Life of Rosa Parks’ with the class will serve as an entry point into a classroom project to address an issue of racial justice in our local community.” — middle school teacher, Athens, Georgia

“I’ll use these books to expose my kids to a part of history that is not taught in the regular curriculum, as well as show them more about the real person behind the paragraph they are taught.” — middle school language arts teacher, Garland, Texas

“The outdated ‘Rosa Parks didn’t give up her seat because she was tired’ message is of no help to young people who are becoming more conscious of their role in creating a better future. I will incorporate this book in both my APUSH and Senior Government classes by having students, in teams, analyze selected portions of the book to facilitate discussion about the movement leading up to the Voting Rights Act of 1965.” — high school social studies teacher, Washington, Utah

These stories make evident that countless teachers, often at personal and professional risk, refuse to censor their lessons. Not only are they teaching about racism and resistance in history, but they are also putting it into practice today.

The Zinn Education Project offers free lessons, professional development, teacher study groups, campaigns and other resources for middle and high school classrooms to bring people’s history to the classroom. Coordinated by the nonprofit organizations Rethinking Schools and Teaching for Change, more than 145,000 teachers have signed up to access lessons since the project was founded in 2008.

The young readers’ edition of “The Rebellious Life of Mrs. Rosa Parks” is by Jeanne Theoharis and adapted with Brandy Colbert. It was published in 2021 by Beacon Press.

Lush Cosmetics donated the books with proceeds from their Teaching Truth in History storewide campaign, featuring store displays in February 2022 about the need to teach honestly about the incarceration of Japanese Americans during WWII, Native American boarding schools, and Rosa Parks and the Black freedom struggle.