Litter of Lounging Lynx Thrill a Santa Fe Couple, But Raise Questions About Whereabouts of their Mother

A Santa Fe, New Mexico-based couple with Colorado connections contacted Ark Valley Voice this week with a wildlife story readers may appreciate. Just a few days earlier they say, what appeared to be three Canadian Lynx kittens had curled up together in the sun, on their property bordering an arroyo, only ten minutes from the downtown Santa Fe Plaza. 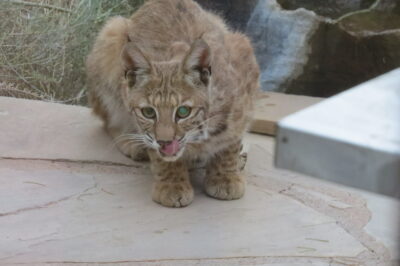 One of three young lynx that appeared at the edge of a residential property in Santa Fe this week. Photo by Keith Anderson

“We get a lot of bear, deer, fox, and we saw the mother lynx more than a year ago, and one of the kittens alone a few weeks ago,” said Barbara Lenssen. “But this was really different because we’ve never seen more than one at once. We have more than an acre and the arroyo comes down off the mountains. These three were really young — all three were the same size — so it made us think they must be siblings.”

“They stayed for about an hour and my husband got a couple of pictures of them together, but they were a ways away,” said Lenssen. “The fact that they laid down together, with two curled up and the third little one was sitting nearby on the bank of the arroyo in the sun was so unusual. We saw no sign of their mother.”

The kittens’ mother may have been hunting. An adult lynx can run at a speed of more than 30 miles per hour and can run significantly faster than a human. One of their favorite meals is rabbit (snowshoe hare), which makes up for about 70 percent of their diet. They also eat other small animals and even birds.

The big cats are interesting creatures. Lynx kittens (a group of siblings is called a litter) have large, webbed feet that act like snow shoes — allowing them to hunt in the snow. The tuffs at the very tips of their ears help them hear better. Baby lynx kittens usually live in cold habitats in snowy conditions. With humans continuing to move into mountain and canyon regions, their habitat is being threatened.

The Protection of Canadian Lynx Came Just in Time

Lynx were reintroduced to Colorado some 20 years ago, after trapping, poisoning, and loss of habitat contributed to the decline here and they were identified as threatened in this state. From 1999 up until 2014, lynx were protected everywhere in the lower 48 states except New Mexico under the Endangered Species Act (ESA) . 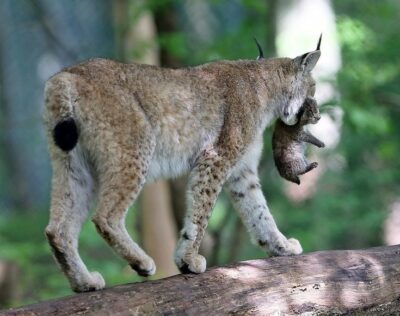 “Successfully reintroducing lynx was one of the most significant projects Colorado Parks and Wildlife has ever accomplished and it’s important that we continue to learn how the lynx are doing,” said the Senior Terrestrial Biologist in CPW’s Southwest Region Scott Wait. He was on the initial reintroduction team and is one of three lead investigators on the current study.

After the rare cats were reintroduced in southern Colorado, they remained on the list of threatened wildlife under the ESA. But the protections did not extend into the mountainous regions of New Mexico, where the lynx faced significant risks when crossing into north-central New Mexico.

Finally, in 2014, a conservationists’ petition to the U.S. Fish & Wildlife Service to federally protect the threatened Canadian lynx inhabiting the mountains of northern New Mexico was partially successful. The endangered cats themselves were given protection. But their critical New Mexico habitat in northern New Mexico’s San Juan and Sangre de Cristo mountain ranges were not protected; meaning there will be fewer requirements to preserve the dense forests they need to survive.

According to the Albuquerque Journal:

“The Fish and Wildlife Service first listed lynx as a threatened species in 2000. The listing protected lynx in 48 states but didn’t include lynx in New Mexico and other areas. In 2007, WildEarth Guardians, the WELC, and others petitioned the federal agency to include the New Mexico lynx population in the Environmental Species Act listing. The environmental groups say delays in protections for the lynx “contributed to the death of 14 of the known 61 New Mexico lynx.”

Colorado wildlife officers have been monitoring the presence of the big-footed felines using remote cameras and wintertime snow tracking. Data now shows there are between 150 and 250 in the San Juan mountains. 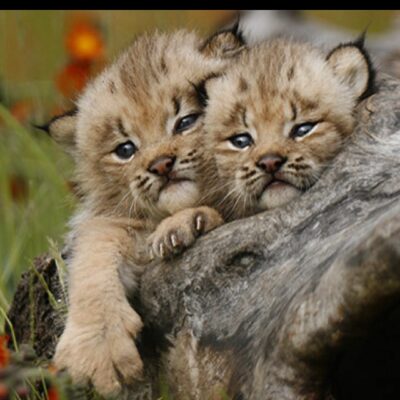 But in New Mexico, counts aren’t as clear. In fact, at the moment New Mexico Game and Fish officials say they really aren’t aware of any lynx in New Mexico and say it could most likely that the kittens that were spotted were bobcasts, not lynx.

According to Bigcatrescue.org, the state line divides a biological group of lynx. More than 200 lynx were reintroduced into Colorado as part of a recovery plan that began in 1999, but by 2010, some 60 lynx had traveled south along biological corridors into New Mexico.  WildEarth estimated that by 2010, at least 14 of these migrating cats had been shot in New Mexico. Others have been run over by cars.

This makes the presence of the three young siblings, which appeared without their mother this week in New Mexico a possibly serious development,or a case of mistaken identity.

Lenssen says the three kittens that appeared at the edge of their property sunning themselves were young and in their behavior appeared to be siblings not yet of hunting age (Lynx begin to learn to hunt between six and ten months of age but can take up to three years to separate from their mothers.).

It should be pointed out that there are some visual similarities between cat families; especially between Bobcats and Canadian Lynx, and some important differences. Lynx have large paws with webs, and bobcats do not. Notably, the bobbed tail of the Canadian Lynx is black-tipped on top, with a white underside. Anderson confirmed that all three of the youngsters had black-tipped bobtails.

New Mexican officials say that the presence of lynx that far south in New Mexico would be unlikely, but not impossible. Their range would be more likely to be 30 to 40 miles further north and at a higher elevation. But they are plannign to reach out to Lenssen and Anderson.

The Colorado Parks and Wildlife has an active research program tracking the reintroduced lynx population. It has also provided a recap of the close-cousin differences between the bobcat and the Canadian Lynx.

Featured image: One of three young kittens currently assumed to be Canadian Lynx that appeared at the edge of a residential property in Santa Fe this week. This one came a bit closer so Anderson could get a photo. He confirmed the black-tipped tail characteristic of a lynx. Photo by Keith Anderson.