When you meet Salida resident Lori Boydston, who is running as the Democratic Candidate for Colorado State Assembly District 60 in the November election, you are struck by her directness. 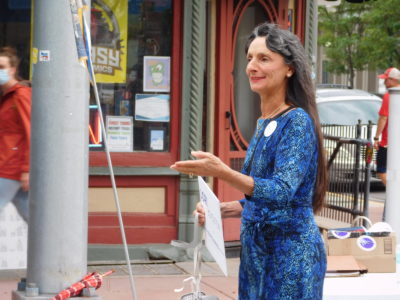 “This is a red district, I realize that,” said Boydston. “No one wants to run as a centrist, so I’m running as a progressive. I wasn’t primaried – because – well, it’s District 60.”

Colorado General Assembly District 60 has been represented for the past two terms by term-limited Jim Wilson, a Republican.

Boydston says she stepped up after a November 2019 rally for then-presidential candidate Bernie Sanders. “I went to a rally in New York with 26,000 people. It was a Bernie love-fest. But after supporting Bernie for four years, I realized I was wearing campaign buttons as jewelry, I was donating, talking to folks about the issues. Back then, I asked myself ‘what else can I do for Bernie?’ Now, I ask what I can do for my community.”

She says that the issues that have inspired her to run for State Assembly are the same ones that had first inspired her to support Bernie. “This is an extension of that support, I guess. We need to develop green energy. We need a green new deal, we need healthcare – Medicare for all, we need broadband access.”

“I want to work on all the issues that affect our rural communities,” said Boydston, “My number one priority for Custer, Chaffee, Park, and Fremont is to make sure I can help to get broadband to everyone. Then I want to work on cementing health care, and up here where we live, climate change is real, so the environment is extremely important.”

And she would know. She has lived in Salida for the past 25 years, raising her three children here, and now her five grandchildren live here.

Boydston says she and her first husband lived in Houston for 20 years (‘Don’t tell anyone” she chuckles); for 18 years running a landscaping company. They sold it to move to Colorado.

“The last six years living in Texas we got an RV and we traveled to the states that had mountains, looking for where we wanted to live. We stopped to visit a friend who lived here, and Salida was it. It also helped that Monarch is right here. We found a piece of property on CR 109 and we just stayed. Our third child was born here. My second husband went to CU Boulder and didn’t leave the state.”

Boydston says that once they were living here, the family has centered on the area. She says she feels fortunate to own a more than 11-acre parcel right on the Little River in Salida. It took seven years to build her “earth house” with south-facing windows that look out on her meadow and her llamas. The parcel had room to subdivide, so members of her family have moved here too.

“My son works with his Dad here. My Dad has moved here. My daughter has moved back here from Denver. My brother on the east coast is considering moving here. This is home.” 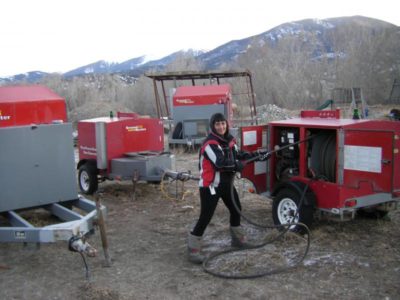 Salida is a far cry from Boydston’s upbringing on Long Island New York. “I left at 17 all by myself – I was a nationally-competitive gymnast and competed all across the country, doing elite training in Florida, South Carolina, Charleston. By age 23 I was coaching and had a gym of my own. But there was a point where I switched – We started a landscaping and garden company, grew it to two million dollars in annual sales, and sold it to move here.”

Currently, the entrepreneurial Boydston owns more than one business with seasonal workflows. First, she owns Frostbusters, a ground thawing business with equipment in Denver. “I bring my machines to sites all over Colorado, and sometimes Wyoming – it’s like a rollercoaster of business. Actually, I’ve had several seasonal businesses from cutting and delivering firewood to managing a spring garden business in Colorado Springs. Normally our summer business is a small B&B. But because of the danger of COVID-19 and my more than 80-year-old Dad living here, that is closed down right now.”

She says she realizes that she is in an uphill fight in District 60, but is encouraged by the realities; “Custer [county] is red. Fremont is red. Chaffee is purple. But there are a lot more unaffiliated voters in these counties and in the region than there used to be. So it depends upon their turnout, and focusing on the issues that concern them.”

Right now, says Boydston, she’s focused on the campaign and serving the voters. “I have the time, I have the drive, I want to be the representative for House Dist. 60. I tell my kids – I’m too busy right now – I’m trying to save the world for the future. I might have been inspired by Bernie, but now I’m inspired by the issues here – helping the rural broadband effort, creating green energy jobs here. And healthcare helps everyone – everyone’s grandkids, not just mine.”